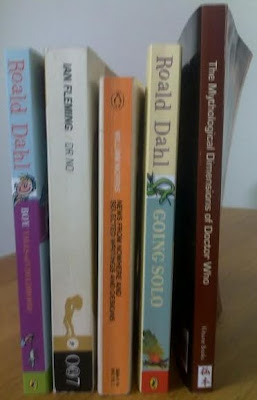 I've already blogged about Doctor No. I reread The Mythological Dimensions of Doctor Who - for which I wrote a foreword - in advance of being on a panel at the launch last week. (I've also skimmed through a PDF of Daddy's Girl by Deborah Watling, in advance of interviewing her a fortnight ago at Utopia.)

Roald Dahl is keen to explain upfront that Boy is "not an autobiography", but rather a series of vivid memories that made an impression on him. This first volume sees him up to leaving school, and is full of the kind of hi-jinks we'd expect from his fictional stories. There are beastly teachers and grown-ups, outrageous (and cruel) pranks like putting a dead mouse in a jar of sweets or making his brother-in-law smoke a pipe of poo.

The book is aided by extracts from Dahl's own letters, meticulously kept by his mother. We get glimpses of the rather serious child, struggling with spelling and the expectations of his posh school. There are plenty of insights into corporal punishment and the etiquette of the tuck box.

It's a fun, engaging read but there's little to suggest Dahl has particularly re-examined these scenes. There's little reappraisal or apology, so that though we learn a lot about the early life of the author, there's no sense that, in writing this, he has.

Going Solo - which I'd not read before - is an altogether more adult book, and I think would have shocked me as a child. Dahl joins Shell and is posted out to Africa, where he lives a rather comfy existence with servants (or "boys" - he doesn't notice the irony of his own nickname) before the outbreak of war.

The episodes are a lot more vicious than the innocence of Boy, with a man being shot in the face right in front of him and his servant murdering a German. As always, Dahl is good on vivid detail, and the book is again littered with extracts from his original letters and also from his log book.

There's a lot on Dahl the pilot, flying in the 1941 Battle of Athens and barely surviving a crash in Egypt. Writing decades after the events, he's still furious about the poor management of the air force and the ghastly waste of lives. Characters are introduced quickly and are then abruptly shot down. While Dahl never shies away from telling us he was a brilliant flyer, he also admits repeatedly that he only got through it by luck.

The book ends with Dahl sent back to England in the summer of 1941, the persistent headaches following his crash invaliding him out of service. It's frustrating to leave it there with so much more still to tell, and I assume there'd have been at least a third volume if Dahl had only lived. With a birthday looming I've set the Dr to find me a good biography so I can find out what happened next (and how much of the story Dahl's already told me can be considered true).

"The achievements of great men always escape final assessment. Succeeding generations feel bound to reinterpret their work. For the Victorians, Morris was above all a poet. For many today he is a forerunner of contemporary design. Tomorrow may remember him best as a social and moral critic of capitalism and a pioneer of a society of equality."

Shankland's introduction to a short supplement on Morris the designer underlines the emphasis of this odd collection. The first 180 pages comprise letters, lectures and reflections in which Morris puts forward socialist ideas, plus some pretty uninspiring poetry and hymns with which to entertain the workers. Though the sentiments are noble, there's little of great wit or insight, and I couldn't help feeling I'd read this kind of thing better put by other people.

Shankland's short supplement addresses the extraordinary design work, with 24 photographic plates that, being in black and white, don't quite show the sumptuous richness of the man's achievements. Vibrant and heavy, Morris's stuff is from an age of large rooms with high ceilings before the anti-chintz mandate of Ikea. Even in their own time they were retro, harking back to a pre-industrial, hand-crafted age.

Being so woefully impractical myself, I view Morris with considerable envy. (The Dr is also a great fan, so I live with a fair bit of his wallpaper.) He willfully embraces a romantic myth of England's past in his subjects, and believes in good and practical design. His infamous quotation to "have nothing in your home that is neither beautiful nor useful” is a rejection of Victorian tat and ornament but is all the more relevant in our jostling flats and apartments. Ikea might have extolled us to chuck out the chintz, but it's elegant, uncluttered and socialist use of space is not a million miles from his.

The main meat of the book, though, is a maddeningly abridged News From Nowhere, the science-fiction tract about a man from 1890 popping to the 21st Century. It's largely a chance to explore a sunshiney, communist idyll, where dustmen wear gold clothes, the Palace of Westminster is used for storing manure and crime and ugly children no longer exist. There's equality between the sexes and a minimum wage.

It'd difficult reading this idealised parable without comparing it to the practical examples of Communism that existed in the 20th Century. As in Child 44, the dogma that socialism will rid the world of crime merely meant crimes were ignored or brushed under the carpet, and the abuses of the capitalist system were replaced by abuses of different kinds. We keep being told it's like something out of the 14th Century, too, which hardly makes it sound inviting.

There are some fascinating things in Morris' vision, though. London seems comfortably multiracial in this future:

"Within [the shop] were a couple of children - a brown-skinned boy of about twelve, who sat reading a book, and a pretty little girl of about a year older, who was sitting also reading behind the counter; they were obviously brother and sister."

(Yes, I appreciate that the boy might just be tanned from lots of time playing outside, but that's not quite how it reads today.)

There's free love and yet with the propriety of marriage (a young couple have been married, she's then married someone else, and now they're getting back together). People are prettier and seem younger than they would in 1890 as a result of better living conditions (something that turns out to be true).

There are also odd things: quarrels between lovers leading to death is not uncommon in this paradise. They still use whips to drive their horses, and it's weird reading of,

"the natural and necessary pains which the mother must go through [in childbirth, that] form a bond of union between man and woman".

Mostly, the book is taken up by a long dialogue between our Victorian traveller and an ancient man who knows his 20th Century history, explaining some of the changes. For all its aping the style of Plato's Republic, this is really a monologue setting out the vision of a cheery future.

And, then at the end of this lengthy interview, this edition skips to the end:

"[Chapters 19 to 32 describe Morris's journey up the River Thames past Hampton Court and Runnymede, the characters he met and the sights he saw. The book ends with a feast at Kelmscott and his sudden return from utopia to the nineteenth century, from the world of 'joyous, beautiful people' to the 'dirt and rags' of his own time. He ends with these reflections.]"

It's like deciding to publish 1984 but only with the excerpts from The Theory and Practice of Oligarchical Collectivism, and none of that boring stuff between Winston and Julia. This edition could easily have included the whole unabridged text, making room for it by excising the selected other writings. You can't hope to convince us of the importance of Morris's utopian vision by such brazen selective quotation.
Posted by 0tralala at 2:44 pm