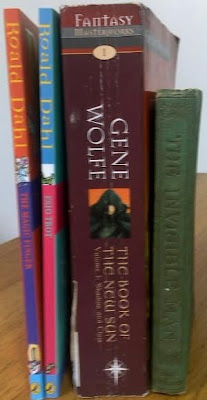 I wrote about the two Roald Dahl books, The Magic Finger and Esio Trot, yesterday.

Gene Wolfe's The Book of the New Sun 1 has taken me most of this month, though that's more to do with other things going on in my life than the book itself. Severian is a torturer, brought up as an orphan by the guild of torturers in a huge and complex city. The city feels medieval but is really millions of years in the future, and reminded me a lot of Neal Stephenson's Anathem.

When Severian is exiled for an indiscretion (which I'll not spoil here), we get to explore the strange, rich world of superstition and base villainy. There are travelling show people (like Riddley Walker), and alien creatures and plants. There are prophecies and goblins and sexy, sneaky ladies. And a plot against - or is it for? - the Autarch.

It's a full, absorbing read, and one much written on elsewhere. I'm aware it's much loved - this particular dog-eared copy is volume one in the Fantasy Masterworks series. But I must admit I tuned in and out of it, not always following events. For a wandering, free-wheeling sort of story, there's a lot of coincidence, stumbling into characters we've met before because it suits the plot.

This is really two books, or the first two in a series of four. The second volume completes the adventure, and though I'm curious to see what happens (and what it's all been about), the rather abrupt ending to each book doesn't exactly inspire excitement.

"Here I pause. If you wish to walk no farther with me, reader, I do not blame you. It is no easy road."

HG Well's The Invisible Man was first published in 1897; my battered Laurel and Gold series edition was published in April 1940. It's the story of Griffin, an albino student at University College who uses science to make himself translucent and then goes on the rampage.

The book shows its age in the details of travel and communication, and the suburban settings. A later section, set round Bloomsbury and Tottenham Court Road, suggests long-vanished slums and criminals just round the corner. I know those streets today, and it's a glimpse of a world both familiar and distant.

There's some uncomfortably forthright stuff about a Jewish landlord and "working like a nigger", while in other areas the book avoids spelling things out. The invisible man of the title spends pretty much all of the book larking about naked, but there's no mention of his invisible chap. (As with a lot of Wells, there's a lot of people ejaculating furiously, but it just means they're talking.)

Griffin is a strange character. We're led to believe on several occasions that his experiment has turned him mad, but he admits he's stolen money - and inadvertently killed his father - long before his researches bear fruit. That he's an albino before he begins his researches is, I think, meant to suggest some kind of racial predisposition or something. I kept feeling it was about to expound on some racial theory, but whatever idea Wells might mean to illuminate remains dodging around in the shadows.

Wells' writing style, though, feels impressively modern - punchy, evocative and absorbing. He's got a deft eye for character, and the suburbs are full of gossiping, bickering, funny individuals. There's a lot of "It seems that..." and "It may be that..." as if the story is presented from disparate sources, which gives a sheen of verisimilitude to the unlikely adventure.

Similarly, Griffin describes at length the processes by which he's disappeared himself - and there's lots on "invisible" creatures and why white paper turns clear when wet. The conjuring trick is not Griffin's technology, but convincing the reader such a thing could be possible. There's a long discussion on the pigments in the eye being the hardest thing to disappear.

But really the book is a series of comic and horrific set-pieces. There's the glimpses of nothing inside the bandages, or the outline of a mouth while eating or smoking. There's the horror of fighting this invisible and ruthless creature. And even the sympathy one feels for him as he tries to hide his footprints from children. The last section is a very effective thriller.

There's a nice twist in the epilogue regarding the tramp, but I felt Griffin's own ending a bit of a fumble. He is caught and beaten to death by some policemen, and then slowly fades back into sight. How much better - and foreshadowed by the fate of his invisible cat - if it were his invisibility that kills him. He's caught in a river or storm drain, and his pursuers struggle to help but can't find him...
Posted by 0tralala at 11:03 am