My novella Fall Out is now available to buy. The blurb goes like this:


When the world died, they turned out the lights.

Jack Bedford may be the rightful King of Britain, but he’s going to have to work for it. In the years since the Cull wiped out most of the human race, the beleaguered island has survived invasions, murderous cults and civil wars. Now, the dozens of tribes and communities who have gradually formed out of the chaos, painfully rebuilding in the aftermath, stand on their own; uniting them will be an uphill battle.

A fresh disaster may give him the chance to prove his leadership. Heysham power plant, in Lancashire, has suffered a catastrophic meltdown, the aging safety mechanisms failing after years of neglect. Hundred have been killed or fatally poisoned.

An emergency council is called. There are nine more plants in the UK; how many are close to failure? What must be done to make them safe? Can the emerging leaders of Britain set aside their differences to deal with the threat? 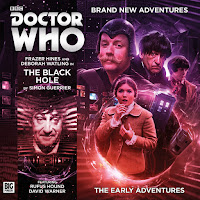 Also out now is Doctor Who audio adventure The Black Hole, starring Rufus Hound as... well, that would be telling. But I should like a hat like that.


On a research station near a black hole, time keeps standing still. Investigating the phenomenon, the Doctor, Jamie and Victoria discover a power far greater than any of the monsters that have challenged them on their travels... The Doctor's own people.

With the safety of thousands balancing out the need to flee, and a policeman from his home planet working at his side, the Doctor reluctantly finds himself involved in a race against time.

But nothing is ever as simple as it appears. And if you can use the Doctor's compassion against him, you have the makings of a perfect trap…