Doctor Who day at Blackwells, London this Saturday 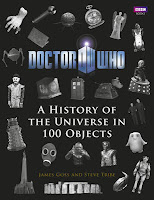 Blackwells bookshop on the Charing Cross Road are celebrating the release of the splendid book, Doctor Who: A History of the Universe in 100 Objects with Doctor Who antics this Saturday.

Full details and book tickets from the Blackwells blog.

At 2 pm, I'll be interviewing authors James Goss and Steve Tribe about the book, then joining Joseph Lidster and Mark Morris to talk about writing novels, audiobooks and episodes, and then there's a fiendishly difficult Doctor Who quiz. Why not come along?
Posted by 0tralala at 11:22 am No comments:

Yesterday, m'colleague Web of Evil presented me with two fine volumes purloined from a second-hand bookshop. The first was Doctor Who: Nightshade by Mark Gatiss, now 20 years old and which I have previously blogged about.

The other volume is The New Adventures of Frankenstein: No. 4 Frankenstein Meets Dracula by Donald E Glut (who later novelised The Empire Strikes Back), published by New English Library in December 1977. The cover seems to show Boris Karloff's Frankenstein meeting, er, Mel Brooks' Dracula: 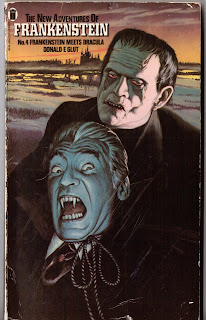 It's a slim bit of shlocky horror - 140 pages for 80p - but a joy to behold. I've only flipped through it, thrilled by the adverts at the back for the most intriguing titles: 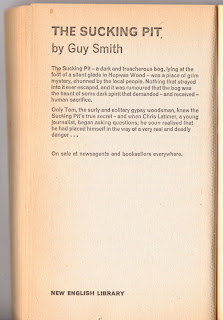 And look at the books listed under "General": 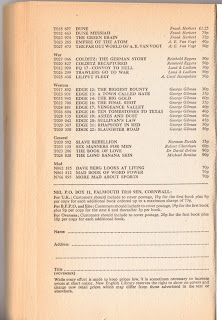 Sadly (given the three books before it), The Long Banana Skin turns out to be an autobiography of a Goon. So I flipped back through the novel looking for a random page which might give a flavour of the story. The words "Burt Winslow's Journal" caught my eye - there's surely no more spine-tingling name in all of horror - and the prose that followed is a pretty damn perfect: 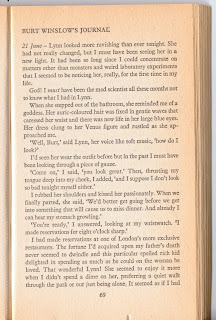 Robert Shearman interviewed by me - podcast

Listen to Robert Shearman read a new short story in a special podcast. Rob was the guest of the British Science Fiction Association in September, where he performed "The Dark Space in the House in the House in the Garden at the Centre of the World" and was then interviewed by me.

Hear the podcast at http://thedoctorwhopodcast.com/upload/RobShearmanBSFA.mp3 WARNING: the podcast includes adult themes and language, and is not suitable for children.

Special thanks to Tony Cullen and Tony Keen at the BSFA, Tony Whitmore for recording the evening and James "Tony" Rockliffe at thedoctorwhopodcast.com.
Posted by 0tralala at 9:28 am No comments:

An afternoon in Greenwich seeing chums. Greenwich Park was busy with workmen and tractors dismantling the Olympic arena, which meant the pathways were all hemmed in and there are great gouges in the ground. Difficult to not feel a pang at what's been done, despite the success of the Games.

Also had a chance to nose round the newly restored Cutty Sark. I'd last been there in 2004 for a wedding, with a disco on the low-ceiled upper deck. I had to dance between the steel girders that came down to my shoulders. How strange to return to it in its new glory - and be so disappointed.

First, it's £12 for an adult ticket, which is pretty steep and made me glad I was visiting on my own. You'd expect some pretty good interpretation for that money, but no. You pass through the expensive gift shop, up a ramp into the lowest part of the ship. There, a few of the beams are labelled - which would be quite useful if you knew your nautical structural terminology.

There are then what look like stacked crates of tea, with brief captions explaining the history of tea in the UK (introduced in the 1650s, made fashionable a decade later by Catherine of Braganza and then the essential British drink when, to counter Dutch traders smuggling the stuff, the tax on it was significantly reduced). There's also a short film about the Cutty Sark itself, and more about its owners and the races its raced in.

You then move upstairs to the level I once danced in... and it seemed a little bare. I read everything to be read and it took less than 10 minutes. I guess that might have been different if the place had been crowded, but there was nothing to hold the interest for more than a moment: a display about the type of sheep that were traded, a reference to the opium wars (rather glossing over what the British inflicted on China to protect its own trade).

The deck affords amazing views of London - with the Shard and the London Eye clear even on a nasty day:

I nosed around the small, cramped rooms and there was a fun projected film of a sailor explaining his work. But again, it was all a bit sparse, with little to excite the imagination or encourage further investigation. I love an obscure top fact, and there was nothing for me.

I took the lift down to the lower floor (the lift building is built on the spot where the TARDIS lands in Dimensions in Time - the philistines) and emerged into what I thought was an expensive cafe. There's something odd about the way the coffee bar dominates one end of this otherwise eye-popping space, the gleaming, copper bottom of the ship hanging in the air above you. It gives the space a cold and corporate feeling, like the ship is merely an expensive bit of art in the lobby of some faceless multinational. 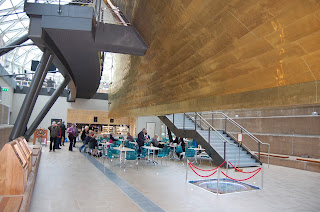 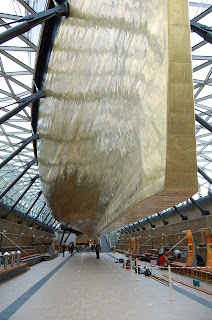 Moving away from the coffee bar made for a better effect, and as I stood underneath the huge vessel, it reminded me of the Saturn V rocket on its side at Cape Canaveral - the same scale, the same sense of travel as adventure and art. 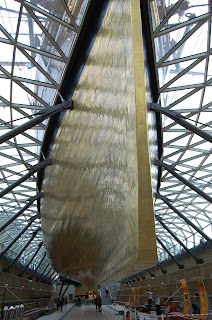 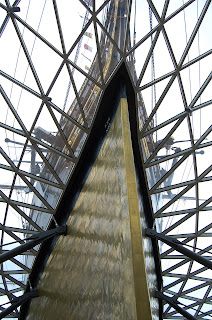 At the end of the room was a strange display of figureheads, which might have been more appealing if there'd been more about what each represented, or how their role changed over time. It's nice to look at but tells you nothing of note. 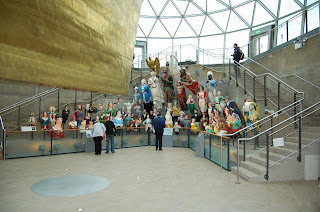 You climb the steps at the end to a viewing gallery, but then have to double back and return to the coffee bar to make your way out - through the expensive shop. I was there less than half an hour, and read all the captions. The worst thing is that I love the Cutty Sark - it played a part in my first date with the Dr all those years ago, and was a landmark when I lived down the road. I even had the Slitheen sail it round the Mediterranean in a Doctor Who book. I already adored the ship; it took a lot to be left so cold. A costly disappointment. 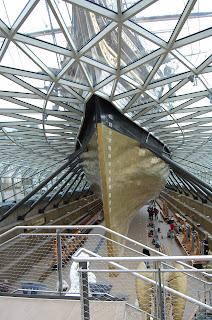