HG Wells and the H-Bomb

This Sunday at 6.45 pm, Radio 3 will broadcast the new documentary I've produced with brother Tom, HG and the H-Bomb. It's a pick of July's radio and telly, according to those nice people at BBC History Magazine. Blurb as follows: 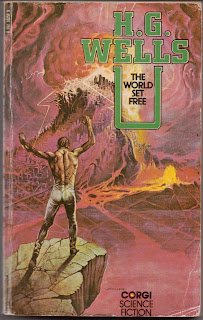 HG and the H-Bomb
Sunday Feature

Samira Ahmed unearths the extraordinary role of HG Wells in the creation of the nuclear bomb 70 years ago - and how a simple, devastating idea led to the world we know today.

In his 1914 novel The World Set Free, Wells imagined bombs that destroy civilisation and lead to a new world order. But his "atomic bombs" - a name he conceived - are grenades that keep on exploding.

How did this idea become a reality? Samira discovers the strange conjunction of science-fiction and fact that spawned the bomb as Wells mixed with key scientists and politicians such as Lenin and Churchill. Churchill claimed Wells was solely responsible for the use of aeroplanes and tanks in the First World War. Thanks to Wells, Churchill was also ahead of many in writing about the military potential of nuclear weapons - as he did in his 1924 article for the Pall Mall Gazette, "Shall We All Commit Suicide?"

In London's Russell Square, Samira retraces the steps of Hungarian physicist Leo Szilard who conceived the neutron chain reaction. Amid the bustle and noise of the capital in 1933, he suddenly realised how to exploit the potential of nuclear energy and - because he'd read Wells - the devastating impact it would have.

But what could he do? How easy is it to keep a secret in the scientific community, with war looming? Once a dangerous, world-changing idea exists, is it possible to contain it? 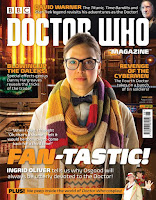 Two new things! First, the latest issue of Doctor Who Magazine is out today. As well as interviews with Ingrid Oliver and David Warner, it includes my chat with chief special effects blower upper Danny Hargreaves.

I was inspired by this short clip on the BBC's official Doctor Who site of Danny blowing up the head of a Cyberman for the serious, scholarly purpose of supporting British Science Week. We talk physics and chemistry and the Kandyman.

Also, those luminous lovelies at Big Finish have put up cast details and released Tom Webster's gorgeous cover for my new Doctor Who adventure, The Black Hole - which is out in November. Despite the best efforts of Rufus Hound's especially distracting moustache, people have noticed his hat. Whatever can it mean? 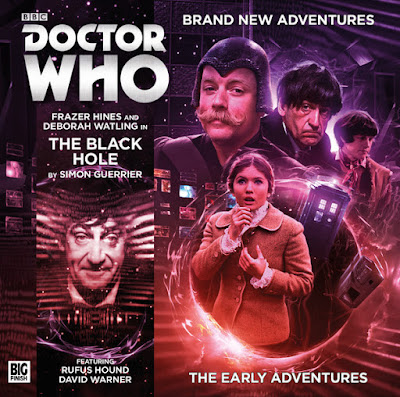 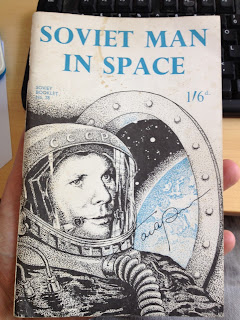 The Dr asked me to write something for the blog she runs exploring the archives of the Croydon Airport Society. She chose a booklet, "Soviet Man in Space" that she thought was my sort of thing. And it is - especially when its cover boasts the autograph of Yuri Gagarin, the first person in space.

Unrelatedly, I was recently interviewed by Will Barber for The Consulting Detective site about The Scientific Secrets of Doctor Who.
Posted by 0tralala at 7:53 pm No comments:

The First Fifteen Lives of Harry August by Claire North is near-on impossible to put down. It's about a bloke called Harry August who, when he dies, lives his life over again - but remembering everything that happened before. He can change small things - such as going into different professions or marrying different people - but the big stuff like the Second World War or his mum dying young from cancer is rather set in stone. And Harry's not alone, either - there's a whole network or "oroborans", looking out for each other and passing messages to one another forward and backward in time. Including a message from the future that the end is coming, and increasingly quickly...

It's one of those books that starts with a brilliant, ridiculous idea and plays it out perfectly logically, but then adds ever more thrilling developments. To say more would only spoil it, but gosh it is good.

An Astronaut's Guide to Life on Earth by Chris Hadfield is packed full of fascinating detail about the counter-intuitive nature of working in Earth orbit. For example, there's this moment in November 1995, when Hadfield was on a space shuttle that docked with the Russian Mir space station. It was an extremely complicated bit of orbital mechanics, but they docked successfully - and three seconds early.


"Only we couldn't get the hatch open. On the other side, they were kicking it with all their might. But the Russian engineers had taped, strapped and sealed our docking module's hatch just a little too enthusiastically, with multiple layers. So we did the true space-age thing: we broke into Mir using a Swiss Army knife. Never leave the planet without one."

But the book aims to find life lessons from Hadfield's experience that we can all benefit from, so there's lots of home-spun advice about why it's good to sweat the small stuff and to be prepared. An example is Hadfield learning "Rocket Man" on the guitar on the off-chance that he met Elton John (which he did) and was invited to play something with him (which he wasn't).

I found Hadfield's drive and goal-orientation a bit wearying, but he's an extremely amiable, likable guy - and quick to recount his own failures and mistakes, such as that time one of his colleagues got a face-full of his nail clippings. He's also got a very accessible style, coolly acknowledging the weirdness and danger and randomness of his day job. And it's hard to not like the guy responsible for the first ever music video recorded in space.

Here's Dr Marek Kukula - my co-author on The Scientific Secrets of Doctor Who - on Doctor Who: The Fan Show answering questions about science, and saying no to Steven Moffat.