The latest episode of film podcast Cinema Limbo is about Smoke (1995), a favourite film that I inflicted on host Jeremy Philips. It's directed by Wayne Wang and written by Paul Auster, and stars Harvey Kietel, William Hurt and loads of other people.
Posted by 0tralala at 6:03 pm No comments:

The thrilling new issue of the official Doctor Who Magazine features two things by me.

First, in "Moonbase 3" Rhys Williams and I have scrutinised recently discovered studio floor plans for 1967 story The Moonbase, focused on the ingenious way designer Colin Shaw maximised limited space. The CGI recreations of the studio set-up for episode 3 are by clever Gav Rymill. I also got some insight into the kind of person Colin Shaw was from his friend and colleague (and my old boss) John Ainsworth. Thanks to researcher Richard Bignell for alerting me to the discovery of the floor plans and helping my poor old brain make some kind of sense of them.

Secondly, "Sufficient Data" is a new regular column by me (and, from next issue, Steve O'Brien) illustrated by Ben Morris and exploring numbers and concepts in Doctor Who in what we hope will be a fun and surprising way. This issue we're all about the number 13. Steve, Ben and I previously worked together on the book Whographica, which is still available in bookshops. 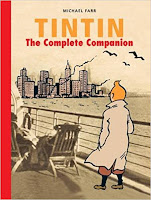 After I read all* of Tintin last year, a kind friend sent me this excellent, comprehensive companion, full of details about the writing of the books, the development of the character and the stuff going on in creator Herge's life. I'm struggling to read much beyond work stuff during lockdown, my attention skidding off the page, but this had been an ideal volume to do in fits and starts.
A lot of it is about the differences between versions of the same story, the way Herge and his editors continued to redraw, edit and revise the books, and in doing so responded to criticism or the dictats of particular publishers. For example, there's The Crab With The Golden Claws, originally serialised 1940-41 and then redrawn for the 1943 book version, all while Herge was living in Nazi-occupied Belgium

"As the first Tintin adventure since Cigars of the Pharaoh [serialised 1932-34] to have kept unequivocally clear of politics, it posed no problem for the Nazi censor. However, years after the war when the question of its distribution in the United States arose, it fell foul of American censors who objected to Haddock's alcoholism and the presence of blacks--mixing races was deemed unsuitable in children's books." (p. 96)

In responding to this, as Farr says, Herge replaced a black gang member with one of "arab appearance" (sic), though the original dialogue remained, Haddock still referring to him as a "negro". Farr is good at detailing Herge's own developing consciousness and regret about the racism in his books, and provides some nuanced and fascinating context, but it doesn't really excuse things to say that other people were worse. My sense is there's a fan's instinctive response here, defending a text so cherished from childhood rather than acknowledging inherent problems.
Farr is best when showing the influences woven into the stories. We are often treated to photographs from Herge's own archive next to panels of his artwork, and there's some great stuff on the real-life people and historical research then ended up in the stories - my favourite this gem about The Secret of the Unicorn worthy of a film of its own:

"The character of Red Rackham [the pirate] came to Herge from a page of Dimanche-Illustre of November 27, 1938, which told the steamy story of the English "femmes pirates" (women pirates) Marie Read (born 1680) and Anne Bonny, and their compatriot Jean Rackam (sic), pirate captain and scourge of the merchant marine and the high seas. Rackam flew a Jolly Roger depicting a skeleton brandishing a cutlass in one hand, a bottle of rum in the other, striking terror in the hearts of his victims.
"According to Maurice Keroul's torrid tales, Bonny, despite being Rackam's mistress, falls dangerously and hopelessly in love with Read who had joined the pirate band in the guise of a man. Read in turn is attracted to Rackam. Before the complicated triangular relationship resolves itself, the pirates are finally cornered, outnumbered, defeated and captured. They are all sentenced to hang. However, Marie Read has her sentence commuted to life imprisonment. On November 20, 1720, Rackam and Bonny are strung up on the yard-arm of their ship in Port Royal, Jamaica. A few days later Read commits suicide." (pp. 108-9)

If there's a criticism, often whole paragraphs are direct quotations from Tintin's adventures, telling us stuff we already know. That's odd because Farr's book is clearly intended to be read with the adventures close to hand: his examples often give page references rather than providing the relevant illustration himself.
It also ends rather abruptly, with a shorter-than-usual chapter on Tintin and Alph-Art suggesting where the unfinished story might have gone next. I'd have liked a bit more summing up, even some sense of Herge's legacy. As it is, the book is all about Herge and his creations as figures of their time but doesn't address Tintin's enduring appeal.
Posted by 0tralala at 12:03 pm No comments: