Doctor Who on Location 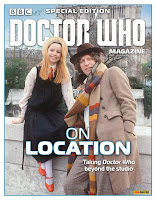 Out now is a new Doctor Who Magazine Special Edition all about the times the TV show has been out on location.

Among the many treats, I've spoken to designer Chris Thompson about filming at Grim's Dyke house in Harrow for The Evil of the Daleks (1967); to location managers Nicky James and Iwan Roberts about tracking down all of time and space for the new series - ideally within 45 minutes of Cardiff; and to former producer Marcus Wilson about the influence of The Empire Strikes Back on Asylum of the Daleks (2012).

Thanks to the help of Nick Setchfield at SFX and Kevin Harley from Total Film, I also recall details of our own trip to Doctor Who on location, when we visited freezing cold Neath Abbey on 10 December 2010 to cover the making of The Rebel Flesh.
Posted by 0tralala at 12:13 pm No comments: