Davros and other villains 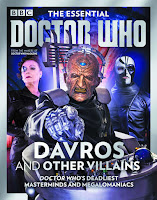 NYDER:
I've heard Davros say there is no intelligent life on other planets, so either he is wrong or you are lying.

DOCTOR:
We are not lying.

NYDER:
And Davros is never wrong about anything.

DOCTOR:
Then he must be exceptional. Even I am occasionally wrong about some things. Who is this Davros?

Genesis of the Daleks by Terry Nation (1975)

The latest essential edition of Doctor Who Magazine celebrates Davros, creator of the Daleks, and other deadly masterminds and megalomaniacs. I got to have pizza with Davros's best (and, um, only) friend Nyder, who told me about his penchant for villainy and singing with Dusty Springfield (see below). I also spoke to the team being the stage show which reunited Nyder and his bezzie, The Trial of Davros.

Tomorrow night (Tuesday, 20 October), I'll be at Unsung Live, which promises to be an,


"evening of storytelling for fans of science fiction, fantasy, horror and all the bits in-between".

I'm reading an odd science-fiction story called "The Case of the Retiring Magnate". The line-up includes David Hartley, Cassandra Khaw and Robert Sharp, and the event is organised by the nice people at the publisher Unsung Stories.

(I'd meant to post something an age ago about a book of theirs, The Beauty by Aliya Whiteley, which tells of a world where all women have died out. It's not right to say I "loved" it - it's really unsettling, the relative passivity of the narrator adding to the feel of a nightmare.)

ETA: Unsung have posted photos from the event, and Andrew Wallace reviewed it.
Posted by 0tralala at 9:00 am No comments:

Prosthetics: from script to screen 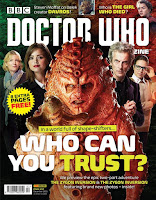 Out in shops now, Doctor Who Magazine #292 features the second part of my interview with Kate Walshe, SFX producer at Millennium FX. This time, we go into detail on the creative process on the first four episodes of the current series (The Magician's Apprentice, The Witch's Familiar, Under the Lake and Before the Flood), explaining how what's written in the stage directions of scripts gets transformed into icky and effective monsters.
Posted by 0tralala at 9:00 am No comments:

The LEGO Book of Love 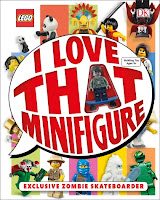 I'm one of the writers of I Love That Minifigure, a book published this month and devoted to LEGO characters old and new. Researching it was truly a labour of love. I adored LEGO as a kid and still wear the LEGO Space emblem with pride, despite being quite ancient.

By coincidence, the Lord of Chaos has just got into LEGO in a big way, chiefly as the result of that fine fellow Ned Hartley sending us the first issue of his new LEGO Star Wars Magazine.

(Once we'd constructed a miniature X-Wing and Slave I, the Lord of Chaos also wanted to see them in action, so we've worked our way through the Episodes IV, V and VI, and I am told I must take him to see Episode VII when it comes out. You can imagine my distress at this prospect.)

Then on Monday, I discovered the big box of Star Wars LEGO I thought I'd given away years ago in the big clear-out of the house before his Lordship's arrival. There has been much rejoicing. 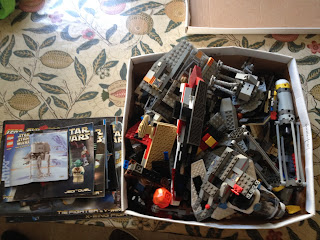