On finishing a notebook

Last night I finished a notebook I've kept since 29 December 2011 (when I was in Egypt). I've kept notebooks since I was in my teens, and find them very useful to refer back to – pinching ideas from my past to pitch anew to unsuspecting bosses. It's not a diary, but flicking through this latest volume reminds me what I was working on and having ideas about, and what preoccupied the insides of my head.

There are the day-to-day notes as I wrote one novel, 10 plays and three short films, marking down new clever wheezes or things I'd need to go back and fix. There are pitches for yet more plays, films and comics, notes on what I was reading or watching (much of it later blogged here), fragments of conversation – real and imagined – and turns of phrase or interesting words or ideas.

As an insight into the terrible mess of my brain, here is a selection:

21/1/12
Lord Wallace of Tankerness is asked if he knows of a case of suicide in a young offenders' institution and responds, “I associate myself with expressions of regret” - [House of Lords, 24/1/12; col. 987.]

Undated
Do we know what we vote for? Have we read the manifestos, interrogated the data and understood the arguments? Generally, no; we are lazy. We buy newspapers and follow Twitter accounts that confirm our opinions. We avoid complex or counterintuitive issues and the testament of evidence in favour of the glib and easy. We elect a smile, a soundbite, a cipher, not a problematic and uncertain truth. Rule so we don't have to think about it – that is your mandate, nothing more.

10/6
Doctor Who - The City in the Clouds ([Rough idea for a Companion Chronicle set in Season 1, but beaten to it by clever Jonny and his Voyage to Venus)
In space, maybe on zeppelins linked together to create a city in the temperate zone on Venus – a city in the clouds.
All a bit Dan Dare (which Ian has read, confiscated from his pupils), and they realise that this futuristic world is in the early 17th Century, the same time as Galileo is on Earth recording the phases of Venus for the first time.
Barbara falls in love and Ian has to take her back to the TARDIS (he uses her mum Joan to convince her to leave). Her lover will think she died.
They have to get down to the planet's surface – the hottest place in the Solar System – to recover the TARDIS. Need local people's help. They don't use money there, it's all about reputation and respect – like crowdsourcing, or your number of followers on Twitter. So the Doctor and Susan etc. have to be storytellers, scientists, busking their way in the society, getting themselves known – and only for the right reasons. Loss of face can ruin everything. That's where we meet them at the start of part one, the Doctor as a Punch and Judy man.
[Before I knew about Jonny's story, I realised that was too much like Patrick Troughton's role in The Box of Delights before I knew Matt Smith would do some Punch and Judy business in The Snowmen.]

21/8
Video going round of a guy mocking iPhone users for taking photos of their food. We're often fooled into thinking we're part of something because we consume it. There are all the tweets and fan activity involved in watching a TV show (a passive experience), or the adverts that sell the idea that by eating a burger or drinking a fizzy drink we're part of the Olympics.

21/10
After the accident, people would say to him, 'Do you dream you'll walk again?'
And he would consider – as if it were the first time he'd been asked – then say, 'No, only of being able to fly.'

14/11
We used to tease her
That in the freezer
Below the croquettes and fish fingers and peas
She kept the bodies of one or two geezers
Who thought they'd got lucky
When she invited them home.

But we were very wrong -
It wasn't one or two.

Something inside her
Moved like a spider
Spinning them in and dispatching them
Then cooking them up for her guests
Despite her reservations that these men
Could be counted as fair trade.

She liked the big-boned ones
Who made lewd remarks
And promised not to treat her respectably.
Their steaks were good for marbleising
And she saw putting them on the menu
As a service to women her age.

27/12
Rewatching The Snowmen. Why does Madame Vastra look a bit different from how she did in A Good Man Goes To War? She's a lizard and sheds her skin, so looks a little different after each shedding. (Also, it's considered rude to point that out.)

4/1/13
Billy Connolly, interviewed by Mark Lawson, describes “middle class” as “the kind of people who had dressing gowns as children”.

7/1
Michael Rosen on Radio 4's Word ofMouth investigating stenography and Hansard (in the Commons). Stenography machines are phonetic and you press keys simultaneously. Need 200+ words a minute to be accurate and keep up with speech. Some stenographers are certified to 250 words. The quality is “down to a price, not up to a standard”.
Posted by 0tralala at 11:43 am No comments:

I shall be escaping my writing hutch next month to do some showing off. Why not come along and say hello?

Saturday 16 March: Blue Box 2, Tunbridge Wells
Starring Leela, Mike Yates, Dorium, K-9 and the insides of the Daleks. I'll be there with Brother Tom to show and discuss my short films Revealing Diary and The Plotters.

Saturday 23 March: Big Finish Day 3, Barking
Starring the Fourth Doctor, his granddaughter Susan, Professor Litefoot and K-9. I'll be there in the afternoon.

Sunday 7 April: Phonicon, Exeter
Starring Lord Edward Dark and the insides of the Daleks. Again, I'll be showing and talking about my short films.

Also, clever Ed Stradling filmed highlights of the Gallifrey One convention in LA this weekend, which have only made me all the more miserable not to be there.
Posted by 0tralala at 11:34 am No comments:

Defined by my Coasters

In the summer of 2000, when dinosaurs still roamed the streets of south London and there were only eight Doctors Who, I hefted my possessions from my sister's flat and moved in with Nimbos. To help us chase the estate agents working on our behalf, I signed up for my first ever mobile phone - a chunky grey thing with a flip-open cover that made me feel achingly trendy. My trusty pager, with a handy clip attachment for fixing to my belt, was never seen again.

I worked for a internet start-up and the bubble hadn't yet burst, so for the first time in ever I had money in the bank. As well as showing off to my new girlfriend and taking her for meals in Pizza Express, I also bought an hilarious set of items for my new home with Nimbos.

Six coasters showing the roundel from the title sequence of Mr Benn.

I'd never owned coasters before and I still don't really see the point of them, but they were the pride and joy of that flat. They really tied the room together. People would call by our flat and comment on those coasters and we'd beam magnanimously back.

When I left that flat to move in with the Dr a year later, I took the coasters with me. People still commented on them, but more in the way on enquiring how long the Dr would put up with my all dorky nick-nacks. And then something very odd happened indeed. People started thinking of me as a Man With Coasters, and went and bought me more. 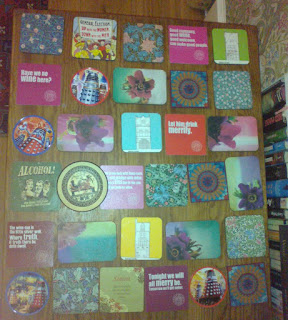 The above picture shows just a small part of my collection. You'll note the six Mr Benn ones aren't included - they're in a cupboard somewhere, along with the set showing specimens of ancient Greek sculpture and ones with quotations from Winston Churchill. You can see the thought that's gone into the selections: booze and Daleks suit me rather well, and designs by William Morris and the Greek stuff goes down well with the Dr. Those ones of buildings were hand illustrated by an architect chum and are really rather lovely. It would be churlish to be anything but grateful to have such thoughtful and generous friends.

If I am defined as a Man With Coasters, it's because I already have them.
Posted by 0tralala at 5:59 pm 2 comments:

Labels: building works, chums, nothing much

Coming soon: Wizard, a film by the Guerrier brothers

A team of hardened professionals assembled in central London earlier today to make Wizard, the fourth short film by the amazing Guerrier brothers - coming to an internet near you in April, I should think. In the mean time, here are some jolly exciting pictures of people in an office, with helpful links to them on Twitter.