Yesterday, I became #109 in George Watson's "People of 2016", a daily photographic blog. That's me in Soho after not enough sleep.

I've known George since we started comparing notes on short films and documentatries we were both busy making. Thrillingly, he's also the author of one of the children's fan letters to Doctor Who companion Sophie Aldred included in her book, Ace! The Inside Story of the End of an Era (1996, written with special effects high brain Mike Tucker). 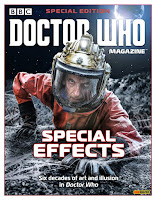 The latest Doctor Who Magazine Special Edition is devoted to six decades of effects in the series. As well as the astounding revelation that the heat barrier in The Daemons (1971) was a physical effect made from tinsel, there's a couple of things by me.

To understand how last year's episode Heaven Sent was realised, I spoke to Will Cohen, Louise Hastings and Salvador Zalvidea at Milk VFX, Kate Walshe at Millennium FX and Samantha Price at BBC Wales.

(The feature also owes a lot to Warren Frey's amazing hour-long interview with director Rachel Talalay, for the Radio Free Skaro podcast. Following that, Talalay posted a video of her demo for the SFX team, demonstrating how they could make a dissolving hand for the episode using a bath bomb kit.)

I also spoke to Academy Award-winning Paul Franklin from Double Negative, who hasn't worked on Doctor Who but explained to me its influence on his own work - including what bits of the series were used as placeholder footage during the making of the movie Interstellar.

(I met Paul when he and I were panelists on The Infinite Monkey Cage last year.)
Posted by 0tralala at 12:04 pm No comments:

To mark 10 glorious years of kids' magazine Doctor Who Adventures, my former boss Paul Lang has written a magnificent celebration of its daftness and delight. He describes this especial foolishness as my masterpiece: 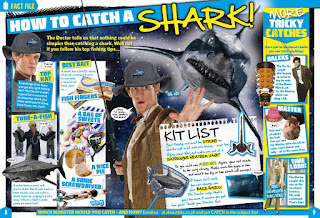 I've already posted all the episodes of daft comic-strip AAAGH! I wrote, and other bits and pieces I did. But there was the time we got "Koquillion" into the wordsearch. Or got the Daleks to write the horoscope (every star sign had "You will be exterminated!"). Or wrote comic strips in which the Doctor battled bogeys, bananas and space owls... Such happy times and places.
Posted by 0tralala at 9:58 am No comments:

Read "The Artificial Bees" for free

My short story "The Artificial Bees" is now available on the Uncanny Magazine website to read for free. It was published in issue 9, March/April 2016.

There's also an interview with me conducted by Deborah Stanish about the story.

If you like this sort of thing, there are ways to support Uncanny Magazine.
Posted by 0tralala at 3:41 pm No comments: