The new issue of medical journal The Lancet Psychiatry includes my review of The Science of Storytelling by Will Storr. You need to pay to read the review but here's the opening grab:


"What links the 4000-year-old Epic of Gilgamesh to the children's book Mr Nosey? According to Will Storr's The Science of Storytelling, they provide “the same tribal function” by showing a character shed a flawed worldview and antisocial habits, then be rewarded with connection and status..." Simon Guerrier, "Flaw Plans", The Lancet Psychiatry volume 6, issue 10, pe. 25, 1 October 2019

I posted a little more about the book here earlier in the year. There's also an index of my pieces for the Lancet.
Posted by 0tralala at 3:00 pm No comments:

I Love the Bones of You, by Christopher Eccleston

My review of Christopher Eccleston's autobiography will be published in Doctor Who Magazine #544 in just under four weeks' time. As last week's headlines made clear, it's a brave and honest account of his own and his father's struggles with mental illness, told with the intensity Eccleston brings to his acting roles.

I've, obviously, concentrated my review on what he says - and doesn't say - about his time in Doctor Who, but that's a small part of the story. As well as all the revelations about the inside of his head, it's fascinating to read his reasons for turning down roles other actors would beg for - Begbie in the film Trainspotting, Sylar in the TV series Heroes - or to learn what drama and actors inspired him. How strange to think of this iconclastic, bolshie star so bristling with terror when meeting his own heroes, whether actor,  footballer or pop star. He tells us that, having been wary of Doctor Who conventions in the past, he's now embracing fandom.

And why not - because he's just as much the obsessive, anxious fan as the rest of us.

For a flavour of the book, here's Eccleston's recent appearance at Rose City Comic Con, answering audience questions with honesty and love:
Posted by 0tralala at 7:45 pm No comments:

Doctor Who Magazine #543 is out in shops now, and features my interview with TV and radio presenter Stephen Cranford about his friendship with the late producer John Nathan-Turner.

Nathan-Turner died in 2002, and Stephen inherited his photos, tapes and paperwork relating to Doctor Who, which he's kindly shared with the clever lot working on DVDs and Blu-rays. We've been able to publish many of the photos for the first time.

We begin with three distinct tragedies. First, in 1970, a three-year old disappears from her family home. Then, in 1994, a teenager with a summer job in the office of her solicitor dad is brutally murdered by a man who is never caught. Thirdly, in 1979, an exhausted teenage mum cracks under the strain and attacks her husband with an axe...

The startling thing about these three awful happenings, each one in itself enough to sustain a mystery novel, is how funny they are before things kick off. Atkinson, whose more recent Transcription I adored, has a gift for telling, comic detail which only makes us feel the awfulness more keenly. In the first few pages, she sets up a household of wayward young daughters and their academic dad.

"What he actually did in there [his office in the family home] was a mystery to all of them. Something so important, apparently, that his home life was trifling in comparison. Their mother said he was a great mathematician, at work on a piece of research that would one day make him famous, yet on the rare occasions when the study door was left open and they caught a glimpse of their father at work, all he seemed to be doing was sitting at his desk, scowling into empty space." (p. 20)

Brilliantly, Atkinson also makes sure we're paying attention from the off. On page 18, we're told in passing that these children's grandmother "succumbed to stomach cancer" a few years back. On page 24, we're told that the grandmother had also asked her son-in-law about stomach pains - him being a doctor, but unfortunately of maths.


"Cornered at a tea table covered with a Maltese lace cloth and loaded with macaroons, Devon scones and seed cake, Victor finally confirmed, 'Indigestion, I expect, Mrs Vane,' a misdiagnosis that she accepted with relief." (p. 24)

We're being ensnared in a greater mystery than what happened in each awful case. Since this is also the start of a novel, we assume they're all connected somehow - and more than simply by each taking place in Cambridge.

At last, on page 69 we're introduced to Jackson Brodie, ex-army and ex-police, now private investigator. Largely but not always from his point of view we explore these cases and the effect of such awfulness on other people since. Brodie has his own issues - his estranged wife taking their daughter away to the other side of the world, and something else he keeps buried deep.

As well as him, there are chapters told from the perspective of Amelia, the chronically repressed and now grown-up sister of the vanished three year-old, and Theo the ever-grieving father of the murdered teen. We see them from Brodie's perspective and him from theirs, adding depth and nuance to the untangling of secrets. Admittedly, that structure also causes some problems: we keep jumping back and forward in time as we catch up on someone's perspective. So there's a moment when Theo discovers an unlikely character has one of Brodie's business cards; a few pages later we're in Brodie's perspective and learn why that card was handed over.

If that felt a little awkward, it's the only criticism I can find. This is a wholly absorbing novel, demanding to be rattled through. It's funny and surprising and emotionally powerful, the revelations in the last act utterly devastating. And yet, for all their impact, Atkinson also weaves in a little hope and redemption, and some quite unexpected sex.

This is the first of a series of Jackson Brodie novels - the latest published earlier this year. But Case Histories ends with everything so perfectly resolved I'm intrigued to see how Atkinson plunges the poor man back into untangling other people's misery. I shall be back for One Good Turn.
Posted by 0tralala at 8:28 pm No comments:

My masters at BBC Books tweeted that they have received a first copy of Doctor Who - The Target Storybook: 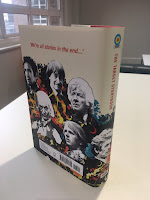 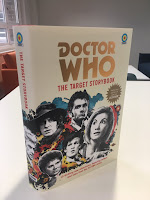 Artist Anthony Dry then provided his full, amazing artwork, definitive proof at last that Adric was the Doctor all along: 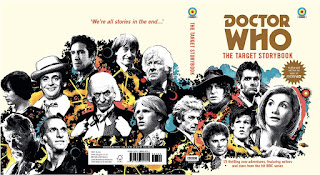 And then the account Doctor Who Comic Art tweeted the thrilling illustration by Mike Collins that accompanies my story in the book: 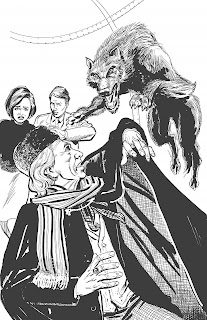 Doctor Who - The Target Storybook is on sale on 24 October.

We’re all stories in the end…

In this exciting collection you’ll find all-new stories spinning off from some of your favourite Doctor Who moments across the history of the series. Learn what happened next, what went on before, and what occurred off-screen in an inventive selection of sequels, side-trips, foreshadowings and first-hand accounts – and look forward too, with a brand new adventure for the Thirteenth Doctor.

Each story expands in thrilling ways upon aspects of Doctor Who’s enduring legend. With contributions from show luminaries past and present – including Colin Baker, Matthew Waterhouse, Vinay Patel, Joy Wilkinson and Terrance Dicks – The Target Storybook is a once-in-a-lifetime tour around the wonders of the Whoniverse.

Fingers in the Sparkle Jar, by Chris Packham

I've had a busy few weeks - as a guest at the Hastings Literary Festival, working through notes on various things and researching and writing various others - and so made slowish progress through this remarkable memoir by  Chris Packham.

As I knew from his 2017 documentary, Aspergers and Me, Chris is autistic and his heightened senses can often be overwhelming. His memoir is a series of vividly recalled and felt moments from his childhood: passion, terror, injustice, the tactile delight of sniffing, touching, tasting nature such as drinking frogspawn. Some of it is very funny, some is pretty harrowing - not least the jumps forward to 2003-4 where it all got too much and he tried to take his own life.

At one point, he richly describes his first efforts to blow out the contents of a bird's egg he's carefully filched. It doesn't work and the egg collapses.


"The crumpled shell was soft and stuck to his fingers, the exploded mess glued to his hand, which he gradually opened. He felt sick with the shock of it, he had the gummy taste of raw egg in his mouth and he now knew why he had been unable to force the contents out of the pinhole. Looking like a bubblegum bogey bathed in shiny spittle a fully developed sparrow embryo lay on its back - bulbous-bellied, big-headed and black-eyed, with a broad waxy bill and peg-like wings and legs, its toes pricked with minuscule claws. He turned it over. It was dead. If he hadn't stolen the egg it would have hatched by now, or at least by tomorrow." (pp. 201-2)

Given that a trait of autism can be a failure to see things from other people's perspective, Packham recounts several moments in the third-person pespective of people around him - a neighbour, a bully at school, his own sister - which raises questions of authenticity, of truthfulness. How much of these and his own recollections are invented, sensations and colour added not felt at the time? But the effect is to show that everyone else had their passions and fears, that this strange little boy is not so alone in his weirdness.

Packham grew up not far from where I did in Hampshire, if at least a decade before me. His prose is peppered with slang that transported me right back: gob, guffs and jaspers (wasps), kids who chucked up when sick and creased up rather than laughed.

But lots of the book struck a chord as the father of an autistic child who is obsessive about bits of nature - snails and sharks and sea creatures. I'm wowed by his parents' patience and continued encouragement as he boils up skulls or brings home a bird of prey. He mentions but I can well see how hard this could all for his sister, for ever being overlooked by being the easier one. The power of the book is that Packham isn't alone and so seeing the world from his point of view is a revelation.