Out now, The Court Jester is the latest volume of The Wife in Space series by Neil & Sue Perryman, in which they watch all of Doctor Who. This one covers the adventures of the Sixth Doctor (1984-1986).

I've written the foreword for this volume, which has given me a chance to revisit what it was like to watch these episodes first go out, and to confess my love for Timelash.

A Legacy of Spies, by John le Carre

"I, who was taught from the cradle to deny, deny and deny again - taught by the very Service that is seeking to drag a confession out me?"
John le Carre, A Legacy of Spies (2017), p. 161.

This is an extraordinary lap of honour, almost a pastiche of le Carre by le Carre himself, the sort of thing in anyone else's hands we would call fan fiction.

It returns us to the world of the Circus and George Smiley, not seen since The Secret Pilgrim (1990), but it's really revisiting the events that led to The Spy Who Came in From the Cold (1963) - le Carre's third novel, and the one that made his name. Along the way, we catch up with characters and events from his two other most successful Circus novels - Tinker Tailor Soldier Spy (1974) and Smiley's People (1979). In fact, since this new book is recounted by Smiley's loyal underling, Peter Guillam, I had Michael Jayston's voice in my head (he played Guillam in the BBC adaptations of those latter two novels; Benedict Cumberbatch played Guillam in the more recent Tinker Tailor film.)

A friend had read and enjoyed this new book without knowing any of this history. I'm now eager to reread those other books to see how well it all fits together. It feels seamless, the only glaring thing being Smiley himself - recruited as a spy to the Circus in 1928 or 1937, depending which book you refer to, but still alive and in good health whenever this new, modern-feeling book is set. It is very contemporary, and though the word "Brexit" isn't used, George tells us he is and always was a European, and is horrified by the idea of England on its own as a "citizen of nowhere".

Yet given the age Smiley must surely be, the only concession to the passing of time is that he no longer wears a suit. The one character to have died since we last visited this world is Smiley's nemesis Karla. Jim Prideaux is still working at the same school as he was in Tinker Tailor, more than 40 years ago.

The story sees Guillam called back to London because there's likely to be a parliamentary inquiry into the events of The Spy Who Came in From the Cold. He is reticent, but slowly we unpick what happened - a little ahead of the investigators he is speaking to. There's a real sense of menace in the jovial lawyers who seem ready to hang Guillam out to dry, and in the character of Christoph - a man out of revenge. It's an absorbing read, full of well drawn characters and telling detail. Indulgent, but perfectly done.
Posted by 0tralala at 12:59 pm 1 comment:

This is a timely publication of two lectures by Mary Beard, one on "The Public Voice of Women" and the efforts to silence them, and the other on "Women in Power." I've long been impressed by the eminent professor's extraordinary patience in dealing with online abuse, from the obscene to the vexatious. Here, she's characteristically considered and considerate in laying out her case that,


"When it comes to silencing women, Western culture has had thousands of years of practice."
Mary Beard, Women and Power - A Manifesto (2017), p. xi.

Concisely and engagingly, she covers a lot of ground, with references from Penelope in The Odyssey to Professor Holly in Pokemon Farm. Images inform the text, in part because these were originally delivered as lectures but also because Beard has always used non-textual sources to add depth and detail to her examination of history.

Some of her more academic books I've found hard to keep up with, but this book is very accessible. That's not to say it's all put very simply - she embraces the complexities and nuances involved. Elizabeth I's speech at Tilbury and Sojourner Truth's "Ain't I a Woman?" would both advance her case, but Beard doubts either woman really spoke the words attributed. She won't take the easy path.

There's much to mull over, whether in relation to politics and public discourse, or applied to my own attitudes and behaviour. Following this example, being more considered and considerate, is not a bad place to start.

But if this is a manifesto, what is the call to action? In her second lecture, she identifies the problem as one of elites holding power over the powerless. Now, various people in the news have been calling out elites for some time, but the danger - especially when wealthy, well-connected politicians claim to be anti-elitist - is that it's about replacing one group in power with another. The system isn't changed and the inequities continue.

Beard concludes her second lecture with the wish to rethink power not as a possession to be fought over, but as a verb, "to power".


"What I have in mind is the ability to be effective, to make a difference in the world, and the right to be taken seriously, together as much as individually. It is power in that sense that many women feel they don't have - and that they want. Why the popular resonance of 'mansplaining' (despite the intense dislike of the term felt by many men?) It hits home for us because it points straight to what it feels like not to be taken seriously: a bit like when I get lectured on Roman history on Twitter."
Ibid., p. 87.

Ad Astra: An Illustrated Guide to Leaving the Planet, by Dallas Campbell 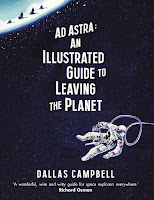 This book is a delight, a breezy yet wide-ranging history of humanity's efforts to leave Earth, plus what the near future might hold.

I've read a lot about the exploration of space, and watched a lot of documentaries, too (and written about them here, you poor souls), so am amazed by how much of this book came as new. For one thing, it's so wide-ranging, exploring things like who made the flags put up on the Moon by the Apollo astronauts, and how they were constructed given the various physical limitations of the lunar surface and the astronauts' spacesuits.

But there's also plenty where well-documented, well-known material is cast in a new light. For example, the book details the various non-human animals that have been sent into space (a subject I looked into for Horrible Histories Magazine a few years ago). This section concludes with the Russian Zond 5 mission of September 1968, where a probe got to within 1950 km of the Moon before returning to Earth. This wasn't new to me, but then the book contrasts the pair of tortoises on board (alongside other creatures) to the "nimble hare" of the human-crewed Apollo 8, launched two months later.

It's packed with detail, a lot of it strange and surprising. As a presenter of science programmes on TV, the author has had direct access to some extraordinary people and places. And the book is all told in short, pithy chunks so what's a complex, technical subject is never too heavy or dry. The text is presented beautifully, too, with lots of well-chosen photographs, documents and curios.

I especially loved how seamlessly the hotch-potch collection is brought together. My favourite, I think, is where we're told that since, obviously, there is no facility to develop camera film in space, in 1964, Robert Leighton's team at JPL conceived and built the first ever digital camera. The cost, given it could take 22 images (of 200 x 200 pixels each), averaged out at $3.8 million per picture.

We then follow this invention being put on Mariner 3 (where something went wrong and the probe was lost to space) and its twin Mariner 4, which launched on 28 November 1964 and reached Mars the following July. Then we get the awful wait for the pictures it took - the first pictures of Mars taken in space - to transmit back to Earth.

Next we're told how Richard Grumm, an engineer, and John Casani, who'd worked on the recording system, got ahead of the process by printing out the raw data from Mariner's camera as it arrived, arranging it in row after row of three-digit numbers, and colouring in these numbers, by hand, with crayons from a local art shop: 050-045 in brown, 045-040 in red, 040-35 in orange, etc.

Accompanying the concise text, there are photographs of the box of crayons, of the chart assigning colours to numbers, of a close-up of the work, and of the actual photograph that was slowly downloaded.
And then you turn the page and there's a double page spread of the hand-coloured version - a breath-taking juxtaposition in one object, one artwork, of cutting-edge science and childlike simplicity.

In all, this is a perfectly curated and comprehensive handbook. It inspires awe, and makes clear how very difficult and dangerous it will be to return people to the Moon and then go further - and how close and inevitable it is that we do.
Posted by 0tralala at 8:53 pm No comments: