Except that the viewing figures usually given for Doctor Who in the 1960s are the BBC's own internal estimates from the time. These figures often differ significantly from estimates by the agency Total Audience Measurement (TAM), which were until 1968 used by ITV networks and advertisers, and based on numbers of households watching not individual viewers.

Since 1981, a single, independent measurement of viewing figures has been produced by the Broadcasters Audience Research Board (BARB), but methods of estimating numbers of viewers have evolved over the years so we should be wary of the conclusions we draw from comparing data from different periods. However, it may help contextualise the figures cited above to know that BARB estimates that in January 1967 there were 18 million homes in the UK, 15.9 million of them with TVs; by January 1968 that figure had risen to 18.2 million homes, 16.4 million with TVs. See www.barb.co.uk/resources/tv-ownership/

(This was a footnote cut from my book on The Evil of the Daleks.)
Posted by 0tralala at 12:55 pm No comments:

Labels: Dalek, droo, telly, the evil of the daleks

I had a lovely weekend at the Doctor Who Appreciation Society's Capitol event, where we launched my book on The Evil of the Daleks. 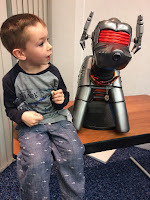 The Lord of Chaos was delighted to poke his nose inside the TARDIS, to meet K-9 (he approves of the new look for the forthcoming film as it is cuter than the original) and to come home with no end of new toys.

I saw lots of old friends, had a nice chat with Bob Baker who'd I'd not met before, and really liked the exhibition of photos, letters and other curios from the collection of the late Alec Wheal, senior cameraman on 1980s Doctor Who, .