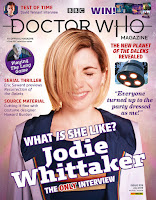 The new issue of Doctor Who Magazine marks my debut as compiler of the "Time Team" - the regular feature in which a group of 20-something fans watch old episodes of the series with a connecting them.

This time, the theme is "Is Doctor Who a kids' show?" - something I've been thinking about a lot over the last year as I've watched my son and his school friends get caught up in the adventures of Jodie Whittaker's Doctor. So, I set Beth, Christel and Luke watching The Web Planet (1965), Full Circle part one (1980) and The Caretaker (2014). We were also joined by Ariana - who has never seen an episode of Doctor Who before.

Here's my interview with Andrew Smith, writer of Full Circle.
Posted by 0tralala at 2:02 pm No comments:

Seurat and the Science of Painting, by William Innes Homer

At the turn of the 20th century, work by Max Planck on the odd properties of light led to a revolution in physics called quantum mechanics. But a generation before him, artists showed an understanding of light no less revolutionary.

I've been interested in the overlap of science and art for a long time, as I posted here after a visit to the National Gallery's 2007 exhibition, "Manet to Picasso". Some of that thinking was rekindled by reading The Pinball Effect last month, which cited the influence on Seurat of the chemist Michel Chevreul. An endnote directed me to Seurat and the Science of Painting, published in 1964.

Sifting through Seurat's surviving papers, accounts of his contemporaries and other sources, Homer pieces together the influences on two particularly famous paintings: "Une Baignade, Asnières" (usually translated in the plural as "Bathers at Asnières") from 1884, and "Un dimanche après-midi à l'Île de la Grande Jatte" ("A Sunday Afternoon on the Island of La Grande Jette"), painted 1884-86.


The key idea is that Seurat followed the colour theories of Chevreul and Rood, among others. Those theories weren't exactly new. Chevreul had experimented with colour while director of the Gobelins tapestry works in Paris, publishing his conclusions in 1839 - 20 years before Seurat was born. Nor were he and the Impressionists the first to use these theories in painting. Homer shows that Delacroix was well ahead of them; he died in 1863, when Seurat was not yet four.

The theories are fairly simple to grasp. In trying to make dyes brighter and more arresting, Chevreul found that it was less effective to mix colours physically than to place threads or fabrics dyed in contrasting colours next to one another. From a distance, our eyes do the mixing optically but to more dramatic effect. The contrasts shimmer and fizz.

Homer provides a range of different diagrams explaining colour contrasts and harmonies, as understood by different theorists. Take the three primary colours: yellow, red and blue (or, in some cases, blue-violet). The direct contrast to yellow is the mix of the other two, i.e. purple. Red then contrasts with green, and blue (or blue-violet) with orange. But that's just the start. Homer then details how the theories incorporate gradations of tone and hue. There are a lot of diagrams.

On one spread, radiating spokes are presented three times to show how the same basic idea passed from person to person - the last of them Seurat. There are also circles, grids, stars and triangles to demonstrate connections of colour, the spokes labelled variously in English or French. It's extraordinary that these diagrams explaining colour in such meticulous detail are all in black and white. We must imagine the connections. The colour plates offer just four small images, each a detail of one of the paintings under discussion. The paintings themselves are also shown in black and white.

The result is that this academic study was all the more hard-going for this reader of limited brain. Homer goes into great detail but (I felt) repeats himself, giving ever more examples of the same basic idea. There's also little on what other science influenced these painters: the invention of photography, the development of new kinds of paint. And I think purists might question how "scientific" some of these theories really are - surely some of the conclusions are more a matter of taste.

But for the most part this is dizzyingly absorbing. The irony is that Seurat's work isn't realistic, yet that stylisation is based on direct observation, recording the strange, real effects of light - such as the colouring of shadows. The brushwork is surely also on to something ahead of its time. Previous generations of painters used delicate strokes to hide their artistry but Seurat favoured spots and strokes, discernable dabs of individual colour.

It is light conveyed in discrete units, packets - quanta.
Posted by 0tralala at 5:11 pm No comments:

Living with a black hole

The June 2019 issue of medical journal the Lancet Psychiatry includes my review of the film Out of Blue.


"Detective Mike Hoolihan (Patricia Clarkson) has always felt safe working in homicide. However, the shocking death of astronomer Jennifer Rockwell (Mamie Gummer) poses difficult questions. While Hoolihan pursues three murder suspects, she also finds herself increasingly affected by the dead woman's work on black holes and unsettling conversations about quantum mechanics and Schrödinger's put-upon cat. She comes to doubt herself, as do we..."

A lot of water has flowed under the bridge since my holiday in Salonica in January 2011 where I read my friend Ben Aaronovitch's Rivers of London, but I recently listened to the audio version of that first instalment and it all came flooding back. Peter Grant is a cop who can do magic, investigating weird shit in London...

Lies Sleeping is the seventh novel in the series - there's also a novella and a spin-off comic series. Here, there's the usual mix of streetwise wit and procedural detail, grounding the investigation in real life and science and history. Ben's gift is to make it feel authentic.


"... me and Guleed ended up in a corridor at UCH guarding [a suspect]'s hospital room, along with a reassuringly solid member of Protection Command in full ballistic armour and armed with an H&K MP5 machine gun. Her name was Lucy and she had three children under the age of five.
'Compared to them,' she told us, 'I don't find this job stressful at all.'
You use Protection Command people for this kind of job because unlike SCO19 they're trained to do guard duty. You want a certain kind of personality who can stand around in the rain for eight hours and still be awake enough to shoot someone in the central body mass at a moment's notice." (pp. 14-15).

There a big, diverse cast of characters, and many now feel like friends. Then there's eye-popping action stuff, some of it read with your heart in your mouth.

It's obviously difficult to write about this book without spoiling earlier instalments, but it's been a real pleasure to bathe in this world again. I especially like how it's a satisfying, standalone story in its own right, but full of stuff pushing forward so that nothing can be the same.

The Waterstones edition includes a bonus story, "Favourite Uncle", told from the perspective of Peter's 15 year-old trainee, Abigail and is a nice bit of Christmas whimsy, never quite going where you'd expect.
Posted by 0tralala at 1:11 pm 2 comments:

The Science of Storytelling, by Will Storr

I'm reviewing this new book elsewhere so can't go into too much detail here, but this has been a fascinating read. Storr uses lots of recent psychological and neuroscientific studies to explain how our brains respond to stories and what we can do to make those stories more effective. There's everything from devising character and plotting to the construction of sentences.

My own criticism is the sometimes glib, even crass, tone. He illustrates a point about how people justify their own bad behaviour with a real-life example of a Nazi who killed children. But the actual example is so visceral and vivid that it's haunted me for days.
Posted by 0tralala at 5:11 pm No comments: 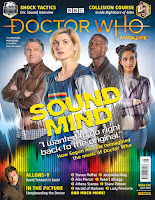 Robert Allsopp's first work on Doctor Who was to make the question mark handle for Sylvester McCoy's umbrella in 1987. He's worked on the series on-and-off ever since - his workshop supplied the mechanical version of the Dalek creature hugging poor Charlotte Ritchie in this year's episode, Resolution.

I've interviewed Rob about his career for the new issue of Doctor Who Magazine - out now.
Posted by 0tralala at 6:06 pm No comments:

I learned about this book in December when the author was a guest on the (brilliant) 1800 Seconds on Autism podcast, and was particularly struck by the subheading: "How to raise a happy autistic child."

It's full of useful advice, explaining the myriad ways autism can manifest and the torturous process of fighting for support. Hewitson has talked to a lot of experts, lots of similarly struggling parents and - most importantly - lots of autistic people themselves. As well as the practical tips and details of where to turn to for help, the book underlines that this can be very difficult but not impossible. You are not alone.

If there's one message here it's to be proactive and to fight on. Hewitson says she hopes the chapter on support in education will "empower parents to know some of their rights and help people with less money and privilege to navigate this complex system."

"Some local authorities are good, but many of you who have already embarked on the quest to get your council to stump up will know it is those who fight hardest and play the LA at their own game who get most support. The poorer kids, or the kids who don't have the capacity for the fight, are gettinng less support or, increasingly none. Meanwhile, the children of the middle-classes are getting provision because their parents can understand and can play or afford to play the system." (pp. 208-9)

It's not just knowing how to play the system, it's also having the means. Many of the therapies suggested here cost money and also take time. You need time to battle the system and go to all the appointments. You need time to chase the things promised that haven't been done. Then, after all that battling, you're offered a course - or more than one - at short notice, an hour a week for however many weeks that effectively writes off half a day when you're already struggling to stay on top of things. Being freelance has helped me be flexible but all that time eaten up has its effect, from the constant missing of deadlines to never earning enough.

So I read Hewitson's accounts of various private therapy sessions with envy. But we battle ever on.
Posted by 0tralala at 9:11 am No comments: