The new issue of Doctor Who Magazine is largely devoted to forthcoming TV episode The Power of the Doctor, and features big interviews with stars Jodie Whittaker, Mandip Gill and John Bishop, plus chief writer Chris Chibnall.

There's also a feature on the sets of Trap of Steel, the second episode of 1965 story Galaxy 4, by me and Rhys Williams, with CGI recreations by Rhys and Gav Rymill. There are some very good puns in the subheadings - "A Scanner in the Works", "Asphalt Jungle", "Rill Met by Moonlight". I didn't write those.

I did write this issue's "Sufficient Data", which marks the centenary of the BBC by looking at every hundredth episode of Doctor Who. As ever, the inforgraphic is by Ben Morris. 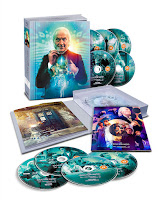 The "Coming soon" feature previews the forthcoming Season 2 box set, comprising the 41 episodes originally broadcast 1964-65. That preview begins with Toby Hadoke talking about "Looking for David", the documentary that he fronts and I worked on and appear in.

An excerpt from the documentary will be shown at the BFI in London on Saturday, 29 October, and I'm hoping to be there to see it. I'm also continuing to research the life of David Whitaker for my biography to be published next year, and this week chatted to the widow of the best man at Whitaker's second wedding.