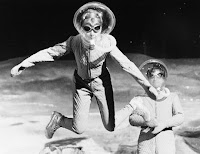 This afternoon, I had a long chat with Nathan Price on his Countdown to the Moon project, discussing Artemis, the TV coverage of Apollo and then all sorts of other stuff. I've had lots of this kind of thing rumbling through my head for a while, so enjoy my attempts to put it into some kind order...

The things I held up at the beginning are:

The Moon - A celebration of our celestial neighbour (ed. Melanie Vandenbrouck, 2019), which accompanied the National Maritime Museum's exhibition The Moon

Doctor Who: Wicked Sisters (2020), in which Dr Who meets early lunar colonists all making the "great leap" in giving up their Earth citizenship. Oh, and some Sontarans. 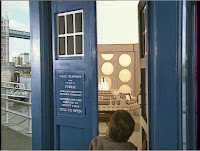 I've set up an account on Mastodon, if that might be of interest:
@0tralala on Mastodon
Posted by 0tralala at 9:36 am No comments:

The new issue of Doctor Who Magazine is, of course, devoted to the return of David Tennant as the Doctor, with plenty of exclusive chatter with the new cast and crew. How lovely to see Scott Handock is script editor on the new series - an age ago, I gave Scott his first writing gig.

Also in the mag is "Factory Records", in which me and Rhys Williams look at the set used in filming the Dalek production line sequence from the end of Episode 4 of The Power of the Daleks (1966), written by David Whitaker. So often in Doctor Who, limited time and money mean what the writer intended must be cut down to something less thrilling, but this is an example of the opposite happening. The CG recreations are by Rhys, Gav Rymill and Anthony Lamb.

There's also a Sufficient Data infographic by me and Ben Morris, this time looking at the Doctor's regenerations. I'd not seen The Power of the Doctor when I wrote the brief, or I'd have squeezed in the regeneration/deregeneration into the Master and back.

The new issue of Big Finish magazine Vortex includes a feature on the Blake's 7 set Allies and Enemies, which is out next month. I've written No Name, the second of the three one-hour audio stories, and have a few things to say in the mag.

In other news, things are bit busy. I was in London two weekends in a row, most recently to attend the screening of the Doctor Who story The Time Meddler at the BFI, plus various clips from the forthcoming Blu-ray release, which include the documentary I worked on about original story editor David Whitaker. I'm pressing on with research for my book about Whitaker, and my other book about one of the Doctor Who stories he wrote, and I'm working on another book, and a book award, and various bits of audio drama, spec work and everything else. It is all go.