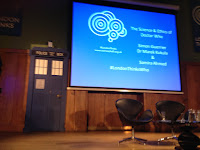 I had a lovely time at Conway Hall on Wednesday night, where m'colleague Dr Marek Kukula and I were grilled by Samira Ahmed on the ethics and science of Doctor Who.

You can listen to the talk - minus the five clips I chose to illustrate stuff - as a Conway Hall podcast: London Thinks - The Science and Ethics of Doctor Who.

More events related to the book still to come. I'll be at Aston Manor Road Transport Museum on 23 August.
Posted by 0tralala at 6:26 pm No comments:

Hansard from before there was Parliament

Hansard is the official report of parliamentary debates in the House of Commons and the House of Lords (I work a bit as a reporter in the Lords). So it's a bit surprising to learn that the first speech reported in its history dates from before there was even a Parliament. To explain this odd fact, we need to understand a bit about how Hansard began.

For a long time, it was against the law to publish the votes and proceedings of Parliament. That was seen as a threat to parliamentary privilege. MPs might be less likely to speak openly in debates if their words were to be shared outside the Chamber.

Some publishers went to prison, but while individual publications were stopped others continued undaunted. Four times in the 1700s the ban was reaffirmed in law. Publishers wriggled round these strictures by printing reports months after debates had taken place or while Parliament was no longer sitting, or by inventing satirical reports from imaginary Parliaments. Even with real debates, what reporting there was could be selective and inaccurate – which didn't help win over MPs.

Finally, in 1771, after a campaign by the radical MP John Wilkes, permission was given for the publication of verbatim – word for word – reports. Such reports became a regular feature in newspapers.

In 1802, William Cobbett began to publish Parliamentary Debates, which compiled these accounts from different newspapers. In 1809, Cobbett employed a new printer, Thomas Curson Hansard, who took over the publication from 1812. Hansard made many improvements to the speed and accuracy of his reports, such as employing reporters directly rather than copying reports from elsewhere. In 1829, his name appeared on the reports – which is why they're known as Hansard today. Last week, Hansard published its 3,000th bound volume of debates.

But before handing his publication to Hansard, Cobbett had seen another opportunity: to collect reports of Parliament from the more distant past. This he did over 36 volumes in – to use its full title – Cobbett's Parliamentary History of England. From the Norman Conquest, in 1066, to the year, 1803. From which last-mentioned epoch it is continued downwards in the work entitled “Cobbett's Parliamentary Debates”. Since the history and the debates make up one continuous work, Hansard reaches back to 1066, before there was a Parliament.

Cobbett tells us in his own preface that he compiled his history from,


“the Records, the Rolls of Parliament, the Parliamentary or Constitutional History, and from the most reputable English Historians.”

Despite these exemplary sources, he also bemoans having had to work his way through an,


“immense load of useless matter, quite unauthentic, and very little connected with the real Proceedings of Parliament”,

which included battles, sieges and even the entire contents of pamphlets. His history is, then, a distillation of earlier reports, concentrating on what was said, by whom, where and when.

Though the title of his history claims that it begins with the Norman conquest, the first date given is 1072, where he tells us that,


“William I, at the instigation of the pope, summoned a national synod, to determine the dispute betwixt the sees of Canterbury and York about supremacy.”

We're told this happened at Windsor, but not what was said or how the matter was resolved.

The next account, from 1106, is the first reported speech in Hansard. Speaking in London, William's son Henry I makes the case why he should be king and not his older brother Robert. But how accurate can that report be? Cobbett tells us the source for this account is the Benedictine monk Matthew Paris (c. 1200-59), whose Historia Anglorum – a history of England from 1070 to 1253 – is thought to have been written between 1250 and 1255, or 150 years after King Henry gave his speech.

Note that Cobbett doesn't tell us what clinched Henry's claim to the throne over that of his older brother. The English barons and the church had complained of bullying behaviour under the previous king, William II. To gain their support, Henry agreed to sign the Charter of Liberties or Coronation Charter – the first time that a king stated that his powers were subject to the law.

Admittedly, those promises were largely ignored by Henry and his descendants for the next 100 years, but it set a precedent for events to follow. Henry's great grandson, King John, also found himself forced to agree concessions to the nobles, and in 1215 he placed his seal on Magna Carta – the great charter.

Historians argue about the significance of Magna Carta, but one thing it established was a Great Council, with representatives from the counties, cities and church, that would take charge of taxation and could – if it had to – stand against the king for the benefit of the country. There had been councils of nobles before, but always subject to the king.

Having agreed to Magna Carta, John then ignored it – and the barons turned to the French Prince Louis for help. There was war – with castles besieged at Dover, Windsor and Rochester. For a brief while, it looked like the barons might win and Louis become king of England.

But John died in 1216. The barons thought they would have more control over John's nine year-old son, Henry, than over French Prince Louis. Henry III was crowned king on the condition he agreed to the great charter. He reigned until 1272, during which time his council first became known as “Parliament” – meaning “to speak”.

In addition, a rebellion in 1265 by Henry's brother-in-law Simon de Montefort led to what's often referred to as the “father or Parliaments”. For the first time, it wasn't the king who decided who sat in Parliament. Instead,


“from each county four prudent and law-worthy knights”,

were chosen by election. The right to vote was given to men who owned land with an income worth 40 shillings or more per year. For the first time, people in the country – if not a huge number of them – had some say in how it was run.

It didn't last, but we can see in that father of Parliaments – as well as in Cobbett's accounts from the reigns of Henry III and Edward I – the beginnings of Parliament as we know it today. In Cobbett's account of 13 January 1223, we have the first recorded speech of a non-royal person in Hansard, from the king's councillor William Briwere. We can see decisions being made by agreement not decree, and – as in 1279 – that the church dared not speak against decisions made by Parliament. We can see the king using Parliament to give his decisions – such as his verdict on Llewellyn – extra weight and authority. We see government referring to precedent, basing their actions on how things have been done before.

So these earliest entries from Hansard give us a sense of the changing terms of power, the early, faltering steps towards the Parliament we know today.
Posted by 0tralala at 11:51 am No comments:

I'm in the Guardian

Spotted by the Dr, me and Dr Marek Kukula feature in The Guide in this morning's Guardian newspaper. 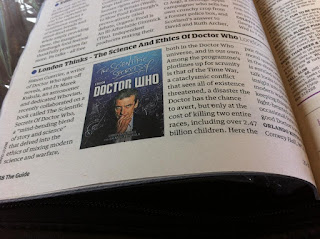 Samira Ahmed will grill us about the science and ethics of Doctor Who (and the chapter of our book devoted to the Time War) on Wednesday night at Conway Hall at 7.30 pm. Tickets from

http://conwayhall.org.uk/event/london-thinks-the-ethical-secrets-of-doctor-who/
Posted by 0tralala at 11:27 am No comments: