Doctor Who: Adventures in History 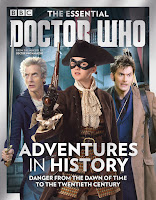 The Essential Doctor Who: Adventures in History is out now, a "lavish 116-page issue about the Doctor's journeys into Earth's past".

It features my interviews with director Saul Metzstein about Dinosaurs on a Spaceship and writer Jamie Mathieson about The Girl Who Died.

(I should really get around to posting some of my old Doctor Who Magazine interviews here. But you can read my interview with Master actor Gordon Tipple, my interview with Leela actress Louise Jameson and my very first feature for DWM, about movie Doctor Who.) 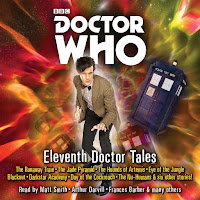 Also announced is BBC Audio's Eleventh Doctor Tales, a collection of 14 original audio adventures that includes The Empty House, written by me and expertly read by Raquel Cassidy. The set is out in October but available to pre-order.

I'm currently writing a book on 1967 Doctor Who story The Evil of the Daleks to be published in time for its fiftieth anniversary next May. It's part of The Black Archive series from Obverse Books.
Posted by 0tralala at 11:05 am No comments:

End of the End 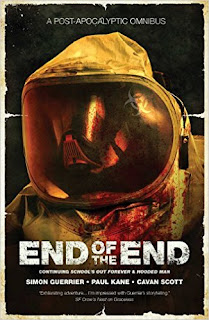 Out this August in paperback and electric bookery is End of the End, "a post-apocalyptic omnibus" including my novella Fall Out, which was previously published as an e-book. You can pre-order End of the End on Amazon.

The amazing cover - showing a character from my story - is by the very clever Sam Gretton.
Posted by 0tralala at 1:57 pm No comments:

The Lord of Chaos and I had a brilliant short break in Liverpool, visiting relatives and seeing the sights. It helped that the weather was glorious - in stark contrast to London. In fact, we got soaked to the skin in the short walk from our house to the train station, and were still a bit soggy hours and hours later when we arrived into bright sunshine at Lime Street. 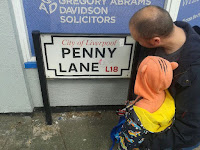 On Wednesday we began with a tour of Beatles-related sites. Mossley Hill, is quite smart, even fancy with its posh bakery and coffee shops, so it's weird to think of young John Lennon tramping to school there. He's not quite the working-class hero of lore.

The Lord of Chaos was more excited to spot the word "poo" hidden in the red writing of the street signs. 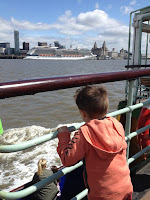 We then caught the bus into town for a nose round The Beatles Story museum and took the brightly coloured ferry over the Mersey. On such a nice day - and at half-term - it was all pretty busy, but good fun.

The tour took us past the largest brick building in the world, its 27 million bricks now inevitably being converted into swanky flats. The ferry gave us a good view of how much Liverpool has been transformed in recent years, modern glass and towers dwarfing the older Victorian architecture, the famous skyline peppered with space-age design.

But then there's always been something of the future about the place. The art deco design of the buildings at Wallasey, on the other side of the river, look like something from Dan Dare and have been reclaimed as a Spaceport. I'd marvelled at that the last time I was here, but not ventured inside. 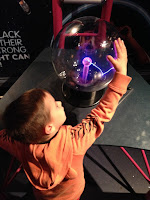 The museum turns out to be great, full of hands-on exhibits that - so rarely in this sort of thing - are not broken. His Lordship was entranced by the toys to demonstrate orbital mechanices and the hurricane machine. We could have stayed another hour.

In fact, his only disappointment was the shop which, after all the perfectly pitched imagination of the galleries, didn't seem as well thought out. There were the usual (boring) pencils, key-rings and whatnot, and some surprisingly expensive Doctor Who merchandise from about five years ago. We decided against £20 for a sonic screwdriver. Then there was late lunch in the Albert Dock, and a trip to a toy shop.

On Wednesday, we climbed the tower of Liverpool Cathedral - a genuine bargain at £5.50 for adults and his Lordship free. What's more, two lifts meant there was only 108 steps to climb - but those on a staircase looking out and over the dizzying spectactle of the bells. 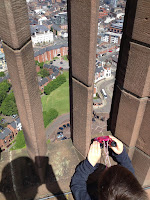 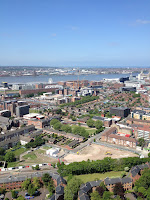 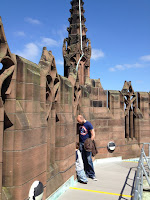 The view from the top was amazing, and we spent a happy time leisuredly working our way round twice, spying out all the details. 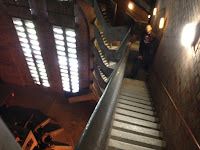 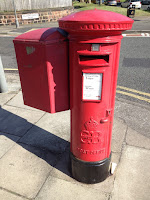 I failed to take pictures of the various other things we got up to, such as our trip to the very well run Storybarn, or much note of the various lovely bookshops I nosed round looking for something suitable as tribute for the Dr. (I am quite delighted with the 1893 third edition of Eric Brighteyes that fell into my arms in an Oxfam.)

And then, pottering about in Mossley Hill again, his Lordship spotted Roman numerals on this post box. It's apparently one of the 271 letter boxes made during the short reign of Edward VIII in 1936. It is a great help to have a pair of eyes at the right level to spot these things.
Posted by 0tralala at 1:49 pm No comments: