A week ago, I was on Venice Beach in Los Angeles with the Dr. She took me to Small World Books - a cool little bookshop crammed with good stuff I'd never heard of, exactly my idea of a treat - and I looked for something with a link to LA. I found Raymond Chandler's The Long Goodbye.

It's been odd reading it this week and recognising street names and districts from our gadding about - places we went to, names I steered by on Googlemaps. I'd noticed the strange, uneasy mix of the very rich and the very poor, living side by side, that Chandler captures so perfectly. We'd gone to gawp at the Egyptian Theater because it's apparently based on Luxor - but the thing that was most like our recent trip to Egypt was the constant, desperate effort by hungry-looking guys to raise a smile or shock us so we'd buy their meagre tat. All this while Broadway hosed itself down in readiness for millionaires to present each other with golden statues.

But Chandler's tale of corruption circling seedy crime, and a newspaper mogul indirectly paying off the police and burying a story, has struck a chord this week.

Chandler's Marlowe is a cynical guy in a cynical world. And yet for all he's sarcastic to cops and hoodlums, millionaires and servants, and the more his story drips with weary resignation at the city-sized mess, Marlowe's revealed - like Rick at the end of Casablanca - to be a strong, moral character, doing the difficult, right thing for no reward and quite a lot of grief. For such a cynical story, it's an oddly uplifting read.

The book's at its best when the dialogue is short and crisp, the wise cracks sharp as a Mexian's throwing knife. It's slightly breaks the spell when characters rant at length about what's wrong with the modern life. And yet this from rich Harlan Potter (do his friends ever call him Harry?) seems especially timely - or depressingly timeless.

"We live in what is called am a democracy, rule by the majority of the people. A fine ideal if it could be made to work. The people elect, but the party machines dominate, and the party machines to be effective must spend a great deal of money. Somebody has to give it to them, and that somebody, whether it be an individual, a financial group, a trade union or what have you, expects some consideration in return. What I and people of my kind expect is to be allowed to live our lives in decent privacy. I own newspapers, but I don't like them. I regard them as a constant meance to whatever privacy we have left. Their constant yelping about a free press means, with a few honorable exceptions, freedom to peddle scandal, crime, sex, sensationalism, hate, innuendo, and the political and financial uses of propaganda. A newspaper is a business out to make money through advertising revenue. That is predicated on its circulation and you know what the circulation depends on."
Raymond Chandler, The Long Goodbye, pp. 233-4.

Yesterday, the House of Lords picked over the Legal Aid, Sentencing and Punishment of Offenders Bill. They got on to parole, and how it works an incentive for prisoners to behave well. But what of prisoners serving long sentences with little hope of parole? Lord Rambsotham, former Chief Inspector of Prisons, then offered this:

"Noble Lords may remember the name of Dennis Nilsen, who was awarded a natural life sentence for a series of perfectly dreadful crimes. Noble Lords may not know that one aspect of education denied to blind children is access to science textbooks because graphs cannot be read in Braille. One of the education officers in the prison, looking at Dennis Nilsen and his characteristics, reckoned that something there could be harnessed. Nilsen was taught to write in Braille. Then, over four years, he described graphs in a science textbook in a way that would be understood, and translated his descriptions into Braille. After four years, blind children had access to a science textbook, thanks to the activities of someone who, in theory, had been rejected by society. I talked with Nilsen and will not describe that. But I will never forget talking to the education officer who had had the wit to realise that there was something in Nilsen that could be harnessed to the public good. She used the word "hope", which was present at the time, and said how essential it was that she had hope that something could be achieved. I was enormously disturbed when that hope was removed by the 2003 Act. I very much hope that the Minister will be able to respond to this amendment".--[Official Report, 9/2/12; cols. 395-6.]

AAAGH! on the Moon! 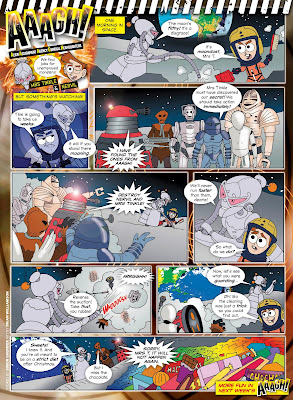 The AAAGH! from issue #253 of Doctor Who Adventures will be my last for a few weeks. I'm sure that comes as some relief. But it's thrilling to realise that this silliness has been running now for over a year. One day I might tell the hallowed tale of how AAAGH! came to be. The world is not ready for that yet.
As ever, the script is by me, the art by Brian Williamson and the editing by Paul Lang and Natalie Barnes - who gave kind permission for me to post it. You can read all my AAAGH!s, and see new ones in Doctor Who Adventures every Thursday.
Posted by 0tralala at 1:44 pm No comments: