I've read loads since completing Space Odyssey - chapters of various mates' works in progress and all sorts of material for work, including a sizeable chunk of Amelia Edwards' 1878 travelogue, A Thousand Miles Up The Nile. Then there's Shirley Jackson.

Dark Tales is a collection of seventeen short stories by a writer who really ought to be a household name. One is a ghost story, one involves psychic abilities, one involves a painting that's like something out of MR James. But the rest are unsettling stories of very human monsters, the tyranny of ordinary snobbery, pettiness and meaness, of social conventions and small communities. They all take place in the modern day, in settings busy with people getting on with everyday life. The best of them are at their most disturbing because they're psychologically real. Women are usually central.

"The Good Wife" is about a jealous husband who incarcerates his wife. The twist ending reveals that the husband is more monstrous than first supposed, but what lingers is the awful detail of the wife's gradual acquiesence - having clearly tried to resist him to no effect, she now presents nothing but sweetness in the vain hope he will relent. In "The Honeymoon of Mrs Smith", a young bride accepts her imminent murder rather than make a fuss. In "Home", a woman learns better than to speak of the ghostly experience that almost killed her. The horror is not only of passivity, but of the ways these women are rendered passive.

In the brilliant "The Possibility of Evil", a respectable old lady notes the strains affecting her neighbours, before we discover that she's been sending them all anonymous, poisonous letters. Yet there's real tension when this malicious creature unwittingly risks being exposed. Jackson has deftly make us sympathise with the monster.

I'm keen to know more about Jackson and what shaped her extraordinary vision. It's surely no coincidence that her first story, "The Lottery" (not included in this anthology) was first published in 1948, in a post-war world lacking moral certainties - though some readers felt strongly otherwise, and she received death threats in response. I feel something noirish, something Hitchcock, in her stories, something haunted by the Holocaust and the Bomb, something deeply ill at ease with "ordinary" life.

It all feels so very contemporary, but not overtly political. In the final story in the collection, "The Summer People", there's mention of degeneration and inbreeding (p. 183), but the story is about the growing anxiety of an old couple when the local shops are out of groceries and oil. It's so relatable, the horror is horribly real.

I'm keen to see the new film version of We Have Always Lived in the Castle once I've reread Jackson's novel and adore the 1963 film The Haunting (based on The Haunting of Hill House), which first got me reading her stuff in my teens. I've also got a biography of Jackson - so more of this to come.
Posted by 0tralala at 3:14 pm No comments:

Out today, issue 1326 of the Big Issue features an exclusive interview with Jodie Whittaker about being the new Doctor Who. Lurking alongside that is a small piece by me and Christel Dee about our new book, Doctor Who - The Women Who Lived.
Posted by 0tralala at 7:37 pm No comments: 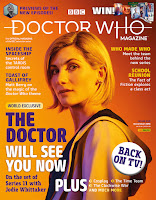 Doctor Who Magazine #530 is now available in shops and online. It includes my interview with musician Christian Erickson about how 1984 Doctor Who story The Caves of Androzani inspired his new album, The Caves - which I've been listening to a lot over the past few months.

The issue also includes a preview of The Women Who Lived, my new Doctor Who book which is out this week, and a nice review of The Eleventh Doctor Chronicles, which includes my latest Doctor Who audio play.

This issue of Doctor Who Magazine is also available as a deluxe edition exclusive to WHSmith, the goodies including a Doctor Who audio adventure from Big Finish (I'm afraid there's a risk you'll end up with one of mine) and a postcard of Lee Binding's cover art for The Women Who Lived.

And you can win a copy of the book by paying careful attention to this interview with me and Christel conducted by Phil Hawkins:

At 9.15 pm tonight, Radio 3 are repeating a documentary presented by Samira Ahmed and which I produced, John Ruskin's Eurythmic Girls, which will then be iPlayer thereafter.

Listen out for the scene-stealing role played by my then baby daughter. As we set up to record that, the conversation round the table led to an idea that's become our next documentary, which ought to be broadcast in February. More on that anon.


Perhaps you did music and movement at school. There was a time girls across the country learnt to dance as if they were flowers. At the start of the 20th century, Jacques-Dalcroze developed Eurhythmics to teach the rhythm and structure of music through physical activity. But the idea had earlier roots, including an unlikely champion of women's liberation.

John Ruskin - now derided by feminist critics as a woman-fearing medievalist - was at the centre of a 19th-century education movement that challenged the conventional female role in society. Amid concerns about the health of the British Empire he looked back to the muscular figures in medieval painting and the sculpture of the ancient Greeks, in their loose-fitting clothes. Perhaps the Victorians needed to shed their corsets and free their minds for learning. In Of Queens' Gardens he set out a radical, influential model for girls' education.

Samira Ahmed argues that Ruskin was an accidental feminist. To understand where his ideas came from, how they were enacted and what survives in the way girls are taught today, she ventures into one of the schools set up on Ruskinian principles, tries on the corsetry that restricted Victorian women's lives, and gets the insight of Victorian scholars.