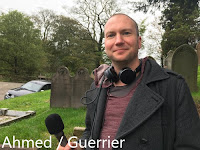 Today, Samira Ahmed and I took over the twitter feed of the Trowelblazers, which celebrates pioneering women in archaeology, palaentology and geology, past and present.

We shared the story of how we made our Radio 3 documentary, Victorian Queens of Ancient Egypt in an 80-tweet thread.

Good in a Room, by Stephanie Palmer

I dared to ask a writer whose work I admire for advice about something I'm working on, and they recommended this book by Stephanie Palmer, subheaded "How to sell yourself (and your ideas) and win over an audience."

It's a simply, straight-forward guide to meeting and maintaining relationships with people who might buy your work, full of practical tips and suggestions. A lot of it is new and immediately useful to me - thinking of meetings as having a "structure" to them, and the ways you identify when to say "no". Some of it also seems painfully obvious - don't get cross at the people you want to employ you - and some of it crystalises stuff that I've sort of been thinking about for some time.

More than a decade ago now, I was a producer for Big Finish and had writers pitching at me. Some of them were brilliant - three writers I was already a fan of accorded me all respect, like I was the established professionl and they were just starting out. Other writers were less so.

There was the one whose pitch was basically slagging off everything in the range I oversaw. Another pitched an idea we'd just sort of done, and when I said so decided that I should come up with the story they could write. Another, I remember distinctly, behaved as if they'd just read some book on making sales. You could almost see it in their eyes when I said I'd already commissioned everything for my current spaces: "Chapter three techniques haven't worked, so now on to chapter four..."

As a result, I'd been wary of reading this sort of book myself, and of applying these "cheats" on would-be employers. Surely they see through that. But I'm glad to say that's what Stephanie Palmer thinks, too. There's a whole chapter called "Stop Networking Now" for exactly that reason.
Posted by 0tralala at 4:13 pm No comments: 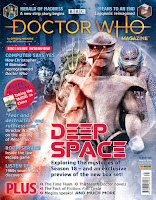 Out today, Doctor Who Magazine issue #535 includes my interview with Feifei Ruan, the illustrator and visual storyteller who created the extraordinary images used to promote Doctor Who in China.

I'm also a page 3 model, with my photo and short biography carefully placed to scare off readers of a nervous disposition. The Dr and the Lord of Chaos were commissioned for the special photo shoot, which included this dramatic moment. 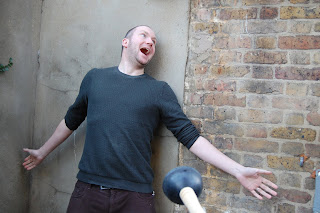 I knocked through this delicious new Doctor Who novel very quickly, revelling in its fun and invention. It's based on a movie script Tom Baker - the fourth Doctor himself - worked out with co-star Ian Marter in the 1970s. Now Baker and my mate James Goss have turned it into a novel.

I knew the basic story from an old feature in Doctor Who Magazine (issue #379, cover date 28 February 2007, since you weren't asking.) But the novel is a revelation, full of wit and life that didn't quite come across in a dry synopsis. Partly, that's down to the first person narration - a Doctor Who story told by the Doctor, and in more than once sense, too.

After a prologue in which the Doctor is, yet again, put on trial by his peers - here is Tom Baker reading that prologue - we start with a picnic, the Doctor playing a ukulele to the despair of his friend Sarah, while Harry is keen to play cricket on the beach. But the three friends are watched by sinister scarecrows - including the brilliant mental image of a scarecrow policeman on a bike - and the scarecrows turn out to be linked to Scratchman or, as we better know him, the Devil himself.

In the late 1970s, the proposed film had a director attached: James Hill, who'd later oversee the TV series Worzel Gummidge. I tried to imagine the events of the novel in the same bleak pastoral style, all on film, the scarecrows beautifully realised. That series terrified me as a kid because it seemed so uncannily real. (Not helped by it being shot near where I grew up.)

Scratchman's scarecrows and its depiction of ordinary, village life with its squabbling egos, would suit that kind of production. But as I read the book, I imagined it more in the style of The Android Invasion - a 1975 Doctor Who story about weird goings on in a village, a mix of location recording and studio sets. That story, the last to feature Ian Marter as Harry, is the jolliest of the stories overseen by producer Philip Hinchcliffe, the one most unlike the rest of his tenure. It was directed by his predecessor, Barry Letts, which might account for some of that. But for all the scares and deaths in Scratchman, that's the tone I felt it had. This isn't to criticise the tone - I really like The Android Invasion - but it may explain why Hinchcliffe turned down the proposal to make this for TV.

A few small things also stood out to this tragic fan. On page 92, Sarah sees a picture of herself, "posing while happily hitting her android duplicate with a lump hammer." Surely, the implication is that Scratchman is set after the events of The Android Invasion - with Harry rejoining the TARDIS for more adventures we never saw on TV. Sarah herself was in only four more stories before leaving the TARDIS, so my head has been busy trying to sort out when these new adventures of Harry fit in.

On another occasion, the Doctor lights a cigar from a monster's burning head - a macabre joke, but one that seems out of character for this particular hero. Indeed, on the 1978 story The Stones of Blood, where the Doctor faces execution, Tom Baker changed a line asking for a "last cigarette" to a "last toffee apple." Today, the "rules" about these things are carefully watched over by benign guardians at the BBC, and I imagine they - in their infinite patience and wisdom - made a special exemption here.

Elements of the story also seem familiar from things that have come after it. An awful moment where we learn the life story of one of the scarecrows just before it's destroyed reminded me of things done with the Cybermen in a couple of stories. The Doctor and his friends caught up in a giant game of pinball that then gets mixed up with chess has echoes of the first Harry Potter. Of course, this story was devised first, but we're coming to it new.

The scarecrow with the sad life story is just one of many deaths, many of them involving characters we've come to like, even if we don't always know their names. In fact, a point is made of that when the Doctor claims to remember all those who have died - a scene I thought really powerful. But the emotional impact of the book is more personal and profound. Scratchman wants to know what scares the Doctor, and for all it is played for laughs that is a penetrating question. We get a sense of what it feels like to be the Doctor, to face so much danger and terror, and to carry so much loss. That loss includes himself - the "deaths" of his former selves, and his own impending replacement. There's some fun with this - Baker can't resist a pop at his immediate predecessor not tipping a cab driver, and there's a lovely cameo by one of his future selves where this Doctor tries to be brave about his future. The trial sequence concludes setting up stuff we've since seen on TV involving his successors.

But the most powerful bit is a PS from the Doctor at the almost very end. Here, surely, is not only the Doctor ruminating on his fears, on what it's like to be him, but Tom Baker, too. He concludes with a beautiful blend of pathos and mischief, and it's hard not to think that Baker is 85. He's quite open in interviews that he's a little fragile now and might not be around too much longer. So this ending ties together the boggling ideas of the book but it also feels like goodbye. It's a perfectly judged sign-off and it completely got me. It made this broken old man cry.

Thank you, Doctor. Thanks for everything. Happy times and places to you, too.
Posted by 0tralala at 1:33 pm No comments:

Astounding is extraordinary, a rich, incisive and constantly shocking history of the science-fiction magazine of the same name, and through it a biography of the "golden age" of SF told through the lives of four luminaries of the genre: John W Campbell, Isaac Asimov, Robert Heinlein and L Ron Hubbard.

I grew up devouring Asimov's stories and a fair bit of Heinlein, and wrote my MA dissertation on the claims made by Campbell and others about the quality - and value - of "real" science in SF. That was all a long time ago, but I thought I knew this story. Not a bit of it, it turns out. And some of my heroes were appalling people.

I'm going to write more about that in a review for someone else, so I'll be brief here. I really admired how Nevala-Lee involves women whose voices have otherwise been lost, reminding us of their presence and underlining their influence. Kay Tarrant, for example, was always at the next desk from Campbell when authors came to visit, so would have had a ring-side view of many of the battles described here. When she had a heart attack, we're told, it took five people to carry out the tasks she'd quietly got on with for decades. We get just an impression of her, but it's a strong one, and important.

The book is also unflinching about the shortcomings of authors - not just the four main subjects - and their sometimes downright awful behaviour. "Asimov, who described himself as a feminist, casually groped female fans for years," we're told (p. 12) - and he's the one who comes off best. But there's effort to understand if not condone them, and we can also glory in their work and their influence.

It's prompted me to read a bunch of Asimov's robot stories again, and I remembered robopsychologist Susan Calvin as a pioneering character - a competent, professional woman getting on with her high-level job. But I think that view must have come from Asimov himself, introducing the stories in his jokey, self-effacing way - as he remarks on his own progressive brilliance,


"You will note, by the way, that although most of the Susan Calvin stories were written at a time when male chauvinism was taken for granted in science fiction, Susan asks no favors and beats the men at their own game. To be sure, she remains sexually unfulfilled - but you can't have everything." - Isaac Asimov, The Complete Robot, p. 327.

I'm keen to look again at Heinlein, and have been eyeing The Pleasant Profession of Robert A Heinlein by my friend Farah Mendlesohn, perhaps (as a kind tweeter advised) after a read of the Expanded Universe collection.
Posted by 0tralala at 6:48 pm No comments:

Pick of the Week in Radio Times 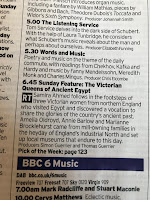 Excitingly, listings magazine Radio Times has chosen our documentary, Victorian Queens of Ancient Egypt (this Sunday, 6.45pm, Radio 3), as its pick of the week.

Bolton Council also has a piece on the documentary: "BBC to highlight Bolton's museum benefactor."

And, on her website, "How we made Victorian Queens of Ancient Egypt".
Posted by 0tralala at 9:22 am No comments: