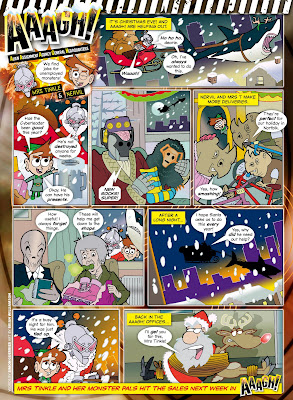 A merry Christmas to all of you at home from AAAGH! Excitingly, Doctor Who Adventures #248 is still in shops until next week, but my bosses thought we'd share this with you now. Script by me, art by Brian Williamson and edited by Paul Lang and Natalie Barnes, who gave kind permission to post it here. You can also read all my AAAGH!s.
Posted by 0tralala at 11:03 am No comments:

One man and his dog

Been a little busy, but on Friday I got two trips out. First, Scott Andrews took me to see Sherlock Holmes 2, which was whizzy and silly and fun. Then I made the epic trek to Chiswick to review Hogarth's house for something out next year (which I shall post about when it happens). What follows is stuff I didn't say in that.

Hogarth lived in Chiswick between 1749 and his death in 1764. Chiswick seems quite proud of the connection. His house was opened to the public in 1904, but re-opened in November after a fire in 2009. In 2001, a statue by Jim Mathieson of Hogarth and his pug-dog Trump was unveiled on Chiswick High Street. It was unveiled by Ian Hislop and David Hockney - I assume symbolic of his status as satirist and artist. 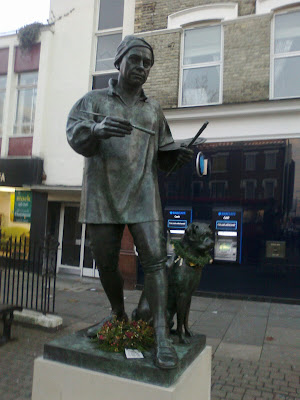 A picture by Hogarth shows the house surrounded by fields, but now it's right next to a busy road and roundabout (both named after Hogarth). You can see and hear the traffic grumping past as you poke round the displays. (I did not put in my review that Donna Noble realises her taxi driver is a robot on this very road.) 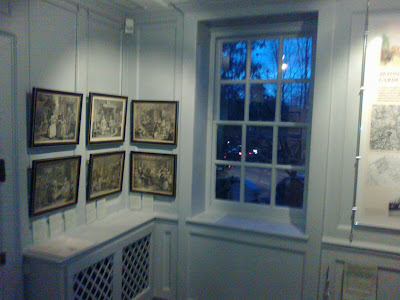 The house was built in what was once an orchard, and the mulberry tree that apparently still blossoms each year is thought to be older than the building. You can just about make out the tree in this picture. 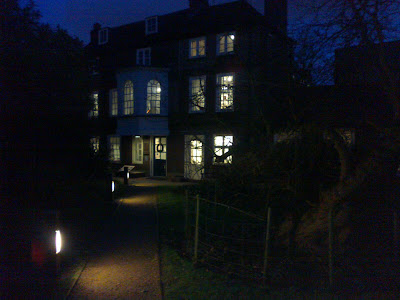 AAAGH! and the carol singers 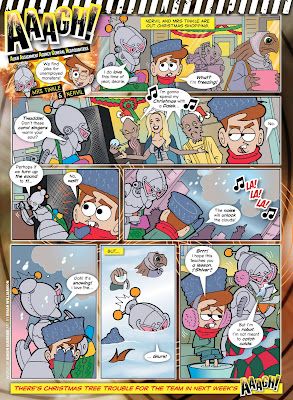 Another festive AAAGH!, this one from Doctor Who Adventures #246 and owing a little to last year's Christmas special, A Christmas Carol, but with added monsters and tomfoolery. As ever, it's written by be, illustrated by Brian Williamson and edited by Paul Lang and Natalie Barnes - who also gave kind permission to post it here. You can read all my AAAGH!s.
As an added treat, here's what Abigail is singing.
Posted by 0tralala at 1:31 pm No comments:

The builder currently rebuilding our house made a cool discovery: 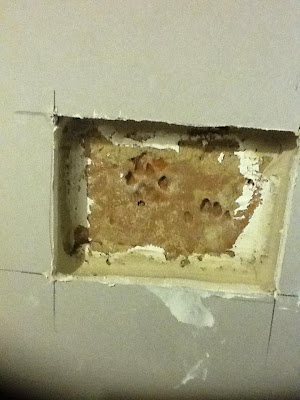 The house is at least 100 years old, possibly late 19th century. And there in the original brickwork are the paw prints of a cat. We're going to leave them on show.
Posted by 0tralala at 1:54 pm 3 comments:

AAAGH! and the Advent calendar 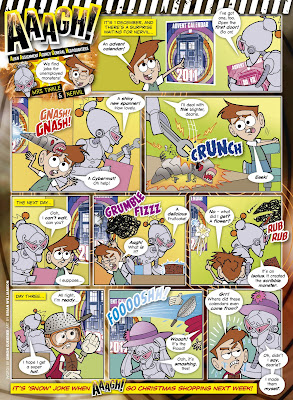 Another AAAGH!, this one marking the start of Advent. There's all sorts of Christmas festivities coming in Doctor Who Adventures in the next few weeks, as we approach the Christmas episode. As ever, the script for this silliness is by me, the art by Brian Williamson, and the strip was edited by Paul Lang and Natalie Barnes - who gave kind permission to post it here. You can also read all my AAAGH!s.
Posted by 0tralala at 9:39 am No comments: