Costume design in Doctor Who 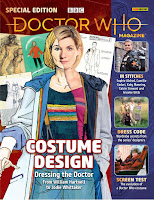 The new issue of Doctor Who Magazine Special Edition focuses on costume design - an often neglected aspect of a series that has otherwise been studied exhaustively.

Running through the special is a decade-by-decade history of costume in the series written by Piers Britton, co-author of the seminal academic study Reading between Designs: Visual Imagery and the Generation of Meaning in The Avengers, The Prisoner and Doctor Who (2003), and its full of gems like the way Sandra Reid had to find plausible ways to put companions from Earth's past into more contemporary clothes.


"Her solution for Victoria, in the character's second serial, The Tomb of the Cybermen (1967), was especially clever. Details of Victoria's original crinoline, with its ruffled bodice, were echoed in a demurely knee-skimming mini-dress, made from a very similar sprigged material but embellished with knife pleats, rather than ruffles, running from shoulder to belt." (p. 8)

The special also includes interviews with costume designers and actors from the series. I spoke to four of the Doctor's travelling companions from contemporary Earth: Anneke Wills (Polly, 1966-7); Katy Manning (Josephine Grant, 1971-3, 2010); Sophie Aldred (Ace, 1987-9); Jackie Tyler (Camille Coduri, 2005-6, 2008, 2010). I also spoke to fan Tim Wearing, who happens to own his favourite costume from all of Doctor Who.

This all dovetails with my ongoing work for the Doctor Who Figurine Collection, where I'm writing 1,200 words for each of the characters I'm assigned from the whole history of the series - as well as longer pieces for the Companion Set issues focused on Doctors and their companions. Here's a list of the issues of Doctor Who Figurine Collection I've written.
Posted by 0tralala at 8:14 pm No comments:

The Pinball Effect, by James Burke


“For several years, at his own expense, Hill investigated the postal system. In the course of these inquiries, he found that government officials and members of Parliament were using their free franking privileges to send private packages through the mail. Some of the less-conventional contents included a pair of hounds, a cow, some sides of bacon, two maidservants and a piano. These and other fraudulent postal practices were costing the British Treasury the princely sum of a million pounds a year.”

This magnificent detail comes from page 14 of The Pinball Effect, or How the Renaissance Water Gardens Made the Carburetor Possible – and Other Journeys Through Knowledge, a 1996 book by the science historian James Burke. The premise is familiar from his other work, ranging from the 1978 TV series Connections to this year's Web of Knowledge for Radio 4: following connections through the history of multiple disciplines to show the unexpected ways in which things change.

In his introduction to The Pinball Effect, Burke refers to the Internet - capitalised because in 1996 it was still a neat, new idea - and the way interconnectedness will change how we think about knowledge and educaton.


“In the near future it will be necessary for everybody to be able to use this information superhighway with the same casual familiarity with which we approach books, newspapers and television. Electronic information sources will become as ubiquitous in our future landscape as the telephone is today.” (p. 5)

That prediction has turned out to be right, of course, but I'll return to something that Burke missed. For the present, it seems that the Internet inspired the format of The Pinball Effect. In the margins of most pages are a series of three numbers, one of 314 "gateways" in the 286 pages that can jump you backward or forward through the text. The idea is you don't - only, anyway - read the book sequentially but hop about following threads.

It's embedding a book with hyperlinks, though Burke's gateways can appear mid-sentence, diverting us mid-thought to some new thread or insight. Even so, the effect is like following links deeper and deeper into Wikipedia - which wasn't created until 2001, five years after this book. Burke's book is from the same year as Geoff Ryman's 253 website (published as a book two years later). It also reminds me of the CD-rom Oliver Postage produced (with assistance from my mate Mark Wyman) to accompany the 2001 paperback edition of his autobiography, Seeing Things. That CD-rom offers the text of printed book riddled with embedded links to additional content in different media (including a chance to hear the author say the word "fuck"). All three titles attempt to apply the innovations of the Web to the traditional printed word.

So, Burke is attempting to embody change as well as to chart it, making a plea on the last page of the book that the form is crucial to understanding the content:


"I hope the reader will try the exercise [of using a gateway] at least once, to get a feel of the crazy way the pinball of change works its magic, bouncing here and there across time and space. There is no single, correct pathway on the web [of knowledge], or in life. Mistrust anybody who tells you so." (p. 286)

Again, I'll return to that last sentence, but first the content.

Burke's history of change is dizzying, lively and full of fun detail. He delights in the odd and unexpected, especially when a consequence is felt in an entirely different field. For example, there's the massive increase in coal consumption in the 19th century to feed the expanding railroads. A by-product of the coal-coking process was coal gas, and a use was quickly found for this waste product: burning it for light.


“The new gaslight stimulated more leisure time reading in general and triggered the birth of the evening class (and unintentionally, perhaps, was the genesis of the educated, professional woman).” (p. 29)

I particularly enjoyed learning that celluloid - and thus the consequent film industry - was developed by John and Isiah Hyatt as an alternative to ivory (p. 38), and had never heard before of the Port Royal experiment (p. 71). I've previously written about the history of cybernetics, but hadn't connected that Norbert Wiener - who coined the term - was pioneering systems to help anti-aircraft artillery.


“In 1944 the new system [based on Wiener and Bigelow's algorithms] first appeared in the form of the M-9 predictor: and during the first weeks of its use against incoming V-1 missile targets along the English Channel, it was a resounding success. In the first week of the final month of German missile attacks, 24 percent of the targets were destroyed. On the last day of missile raids, in which 104 rockets were launched, 68 were destroyed by Wiener’s cybernetically controlled guns. Britain was saved.” (p. 90)

Speaking of artillery, Burke explains how Napoleon used smaller, more standardised cannons to make his horse-drawn artillery much more agile and effective. From this, we're told that in 1799 Napoleon led his army through Switzerland on his way to battle the Austrians - but some of the Swiss objected. A battle in the canton of Unterwalden left lots of Swiss dead, and the resulting orphans were taken in by a former farmer and novelist (he failed in both lines) called Pestalozzi.

With no money for books or equipment, Pestalozzi developed a radical new kind of schooling for his charges, which he wrote up in the 1801 textbook, How Gertrude Teaches Children: An Attempt to Give Directions to Mothers How to Instruct Children. Burke's summary makes it sound very progressive: all about independence and hard work, the children teaching each other from direct experience. It's fascinating in itself.

But years before, in 1797, Pestalozzi had met and become friends with a German academic, Johann Fridrich Herbart, who in 1809 (Burke says "by 1808", but checking elsewhere suggests otherwise) succeeded Kant in the chair of philosophy at the University of Königsberg. This made him an influential advocate of Pestalozzi's theories on teaching. In Pestalozzi’s ABC of Observation, Herbart extended his friends ideas by looking at how learning from experience modifies and moulds a person, forming personality. The "apperceptive mass" of experience is how the individual understands the world. Any subsequent experience is either similar to previous experience and at one with the existing mass, or it is different and so crosses what Herbart called the "threshold of consciousness" to be recognised as new.


“Herbart thus established the formative nature of this threshold and effectively turned psychology into a science.” (p. 254)

There's something extraordinary in the science of psychology emerging as a by-product of Napoleon's campaigns - though I now need to return to what Burke didn't spot about the way we (would) use knowledge on the Internet.

Burke's "select biography" runs to six pages, and is full of fascinating-looking books. But The Pinball Effect has no footnotes or endnotes with which we can check the provenance of his ideas and interpretations. We must take Burke at his word as authority. As Wikipedia would say, "Citation needed." In fact, my seven year-old son will repeat by rote the lesson drummed into him at school: because anybody can change Wikipedia, it's a useful starting point for finding things out but you have to check everything claimed.

On the last page of The Pinball Effect, Burke almost acknowledges this issue of authority - as we've already seen.

He's so nearly there, but the change isn't quite what he expected.
Posted by 0tralala at 8:15 pm No comments:

This, the first in a series of acclaimed young adult novels, is set in a segregated world very like our own but where white people are an oppressed underclass.

I've seen something like this before. It was done in Fable, a 1965 episode of the BBC's anthology series, The Wednesday Play. There's also something of the same idea in MP Enoch Powell's notorious 1968 speech where he quoted one of his consituents - "a decent, ordinary fellow Englishman," according to Powell - who was convinced that, "In this country in fifteen or twenty years time, the black man will have the whip hand over the white man."

Fable and that speech were responses to legislation on race relations being put through Parliament at the time, but Blackman's novel is less about specific policy as it is about showing how privilege and prejudice shape the way we see the world.

We alternate between chapters narrated by rich black girl Sephy, whose racist dad is high-up in the government, and chapters narrated by Sephy's friend Callum, who is white. At the start of the novel, Callum has - with Sephy's help - passed an exam to be allowed to go to school, where he'll be one of a handful of white students. On his first day, there are protests outside the school to prevent him getting in. We follow Sephy and Callum through their school days and beyond, as they become ever more politicised by the unjustice and cruelty of their world - and face inevitable doom.

Blackman makes the unfolding tragedy utterly devastating. We often see the same event first through the eyes of one of our narrators, and then completely differently when viewed by the other. We understand their disagreements and fights from each perspective, and continually learn why other characters behave in what seem mean and spiteful ways. Most haunting, I think, are the handful of characters struggling against insurmountable odds to change, to improve, the system.

Along the way, the plot covers alcoholism, terrorism, violence and totalitarianism - in appropriate terms for the young adult reader, but not shying away from the moral dilemmas or profound questions involved. Blackman unfolds the story in short, emotive chapters, the prose immediate and straight forward. But the simplicity is deceptive: this is a rich, powerful and affecting novel. It underlines, too, that half a century after that race relations legislation was passed, there is still a long way to go.
Posted by 0tralala at 3:19 pm No comments: 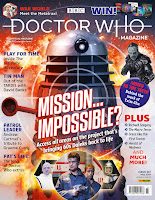 Doctor Who Magazine #537 is in shops from tomorrow, and includes my interview with Samuel Oatley, the actor who played terrifying teeth monster Tzim-Sha - or Tim Shaw - in last year's The Woman Who Fell to Earth and The Battle of Ranskoor Av Kolos.
Posted by 0tralala at 1:54 pm No comments: