You can read my review of the Star Wars Identities exhibition for the Lancet Psychiatry. And here are some pictures I took as I nosed my way round with Lady Vader.

Doctor Who and the Paper Dolls

Praise the company! I've just been sent my first copy of Doctor Who - Paper Dolls, the book I've co-written with Christel Dee and magnificently illustrated by Ben Morris. It's out in shops soon. 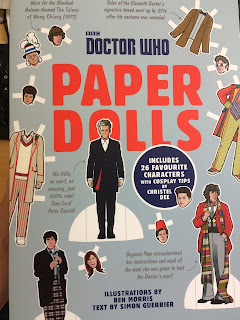 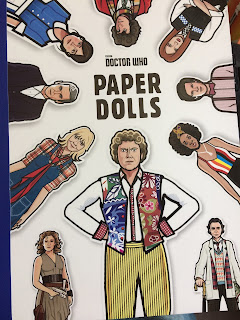 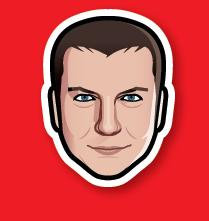 My friend Red gave me The Deptford Trilogy by Robertson Davies almost a year ago, but work got it in the way so I've only just read the first instalment - Fifth Business, originally published in 1970.

The book is a memoir by an old teacher, Dunstan Ramsay, sent to the headmaster of his school. It's a rather rambling life history, beginning with a snowball fight, then taking in Dunstan's relatively impoverished childhood in a Canadian village, his horrifically conveyed service in the First World War, and his later teaching and academic career, writing books about saints.

Davies is clearly influenced by Jung - the main characters in the book seem to represent Jungian archetypes. There's plenty on memory - one mean act haunts one man for decades and overshadows the life of another, yet is entirely forgotten by the perpertator. As Dunstan details his own experience, we follow the threads of these other, connected lives until very late - on page 244 of 257 - we realise this is less memoir than confession and the threads suddenly tie up.

The effect is that as you're reading it this is an enjoyable amble that wears its intelligence lightly, but it becomes in retrospect something much more affecting. It's not just the plot; there are so many asides and observations that I suspect I'll long be picking over. For example, there's Dunstan's friendship with the maverick Jesuit, Padre Blazon, who had over 100 and in a Viennese hospital, still eagerly courts radical views:


"The Devil knows corners of us all of which Christ himself is ignorant. Indeed, I am sure Christ learned a great deal that was salutary about Himself when He met the Devil in the wilderness. Of course, that was a meeting of brothers; people forget too readily that Satan is Christ's elder brother and has certain advantages in argument that pertain to a senior."
Robertson Davies, Fifth Business (1970) in The Deptford Trilogy, p. 240.

According to the Oxford Dictionary of National Biography, William Hartnell – later, the first Doctor Who – trained as an actor at the Italia Conti Stage School. In 1924, aged 16, he joined the repertory company of actor-manager Frank Benson.

The ODNB says Hartnell “often” appeared in eight plays in a single week. I've found little supporting evidence for this in the contemporary press – but then the press wouldn't necessarily name every member of a cast, especially if they played only a small role.

Benson's company was well known for its productions of Shakespeare and Wikipedia lists appearances by Hartnell in The Merchant of Venice, Julius Caesar, As You Like It, Hamlet, The Tempest and Macbeth all in 1926. The same year he also appeared in She Stoops to Conquer and School for Scandal, and the following year in Good Morning, Bill. I've seen his name in cast lists but no reviews that comment on his performance - until now.

The following review was published on page 8 of The Devon and Exeter Gazette on Tuesday, 15 November 1927.


A THRILLER
“The Man Responsible” at Exeter Theatre.
SENSATIONAL PLAY
The Theatre Royal, Exeter, during the past season or so has staged a number of “thrillers”, but they have been, with the possible exception of “Dracula”, thrillers of a wholesome character. We recall such dramatic sensations as “The Ghost Train”, “The Bat”, “No. 17” and “The Cat and the Canary.” This week a thriller of a totally different character is being presented in “The Man Responsible.” The play, it is true, is full of thrills, but thrills of a nature which hardly appeal to the ordinary theatre-goer we should imagine. It opens upon an unpleasant note, and as the play develops situations arise which are unpleasant in the extreme. The drugging and hypnotising of a promising young doctor by a specialist driven mad by revenge for the death of a daughter by an illegal operation, and the forcing of the young medico to perform a critical operation on his mother, who dies while under the influence of the anaesthetic, form sensational thrills, but whether they are of a wholesome description is another matter. The reference to the “Justice of the Almighty being too slow” in the “trial scene” is not pleasant, to put it mildly, even though it be the ravings of a madman. To our mind “The Man Responsible” strikes the note of “melodrama gone mad.” Probably we shall be hauled over the coals for our opinion, but the duty of a critic seems to us to be to express his opinion, and this is the opinion of our critic. By the way, what has Exeter done to be mentioned as near the scene of the play?
The company who present the play have a difficult task, and the most difficult of all is that which falls to the lot of Mr. William Hartnell, to whom is entrusted the all-important role of Dr. Ronald Warden, the tortured young medico. It was a realistic playing of the part for which Mr. Hartnell was responsible. First there was the brilliant young medical man, eager and enthusiastic, standing at the threshold of what promises to be a useful and splendid career. Then there comes the transformation into the drugged, nervous wreck, the tool of the medical maniac. A wonderful realistic presentation Mr. Hartnell gave, and his audience accorded him the whole-hearted applause he deserved. Miss Mabel Heath gave a sympathetic rendering of Annie Ritter – another part calling for careful handling. Mr. A Fellows Bassett gave a “Svengalistic” touch to the role of the hypnotising maniac, Dr. Morris Morton, while Mr. Harold Greaves was convincing as Dr. Felex Gordon. Miss Hazel Morne did well as Marion, and the minor roles of Vernie (Miss Dulcie French), Mrs. Warden (Miss Eugenie Vernie), and Jensen (Miss Sylvia Rimmer) were well presented. There will be the usual Friday matinee.

The following year, Hartnell had a role in Miss Elizabeth's Prisoner, alongside the actress Heather McIntyre. They married in 1929. In 1932, Hartnell made his first appearance on film in Say It With Music.
Posted by 0tralala at 2:46 pm 1 comment:

Out now in shops - and digitally from PocketMags - is The Essential Doctor Who - Adventures in Space. 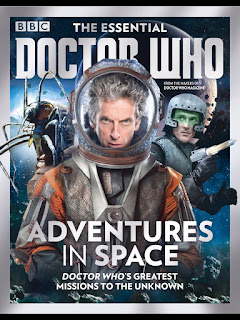 Among the delights, there are four things by me:


You might also like to read my hour-long chat with current Doctor Who big cheese Steven Moffat, conducted at the Fairford Festival of Fiction earlier in the month and now up on Koquillion - my site of interviews with Doctor Who cast and crew.
Posted by 0tralala at 12:57 pm No comments: 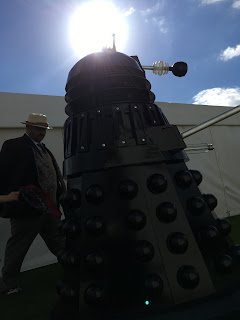 On Saturday, I was a guest at the Fairford Festival, the literature bit organised by my friend (and sometime mentor) Paul Cornell.

The day began with a brilliant talk by Sarah McIntyre who got us drawing sea monkeys and singing the sea monkey song. Then Sarah took part in the parade through town, a fire engine leading assorted Daleks, drummers and boy scouts through the glorious sunshine.

Emma Newman, whose Planetfall I found enthralling, then discussed ways to knuckle down to writing, overcoming fears and distractions and the need to tell people what you're working on rather than doing the work. I really like the idea that the more you write and send out and get rejected or critiqued, the more you build up armour.

Then Marek Kukula and I did our spiel on the Scientific Secrets of Doctor Who - and Sarah McIntyre sketched us looking especially clever.

After that we went hunting for food and enjoyed a bit of sun, and got chatting to various people, including the team at Pea Green Boat Books and also Ian Millsted, who has written a Black Archive book on the 1982 Doctor Who story Black Orchid. But that ambling about and nattering meant I sadly missed Shagufta K before returning to catch the end of  Martyn Waites' talk. By then I was a bundle of nerves in preparation for interviewing Doctor Who head writer (and my boss), Steven Moffat, to a packed and eager audience. 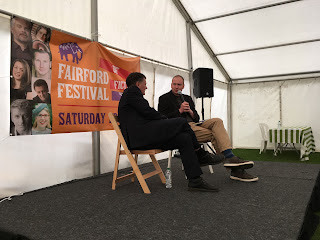 There was just time to wave goodbye before Marek and I had to race for our train back to London, only to find it was running late anyway.

Which meant we were on the Tube heading for London Bridge when the announcement came that the train would not be stopping there. With no other information, not sure what was going on, or how much of London was affected, I then had a convoluted and very long journey home via several modes of transport. There were a lot of frightened people on the trains and buses, and also the resignation of south Londoners used to transport being all acock. But the most noticeable thing was the constant, "Hi, are you stuck, can I help?"
Posted by 0tralala at 10:24 am No comments: