Last week, I was on an online panel organised by IPAC and and the Keck Institute for Space Studies, discussing the ways that science-fiction writers create fantastical worlds. A little intimidatingly, the other panelists were Becky Chambers, Mary Robinette Kowal and John Scalzi, all under the eye of moderator Phil Plait. Here's the full thing:

The time difference meant that the panel started at 1 am for me - so, rather fittingly, I was calling in from the future.

Thanks to Dr. Jessie Christiansen for inviting me and the expert team who put it all together.

The new issue of Doctor Who Magazine includes my feature on the role of David Whitaker in developing early Dalek mythology and helping to make them a cultural phenomenon. As story editor on the first year of Doctor Who, Whitaker commissioned the first Dalek story from writer Terry Nation, defended it from BBC management who didn't approve, and then - when the Daleks proved a huge success - worked with Nation to exploit them across various media.

The article coincides with a beautiful new edition of the Dalek comic strips from the mid-1960s that Whitaker probably wrote most of, and the brand new Daleks! animated series that takes many of its cues from that strip. 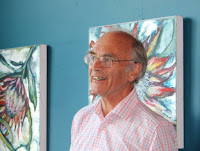 Yesterday, we buried my father.

It has been a fraught week, trying to anticipate changes to lockdown rules relating to funerals - whether we could go, whether I could stay over or would have to drive a 370-mile round trip in one day, whether we could get childcare so the Dr could come too. On Thursday morning, there were police outside the children's school checking that everyone socially distanced and did not mix households, and so I made sure I had the order of service printed and in the car in case I got stopped on the way down.

But we got there, and on a sunny, cold hillside just outside Winchester we gathered with family and a few friends. It was odd being with people anyway - the small gathering still the largest group I've been in since the beginning of March. And it was unsettling, being with family and Dad's friends but him not being there. I kept glancing round, expecting to see him.

Dad wasn't religious but a former bishop presided, an old friend of my parents' who nicely judged the God stuff. I read a short thing of Dad's various catchphrases which, to my surprise, got a lot of laughs. My elder brother read an email from Dad's brother stuck in the US, and my baby brother followed with a reading that Dad had read at his own father's funeral in 2002. There were other bits and pieces, and we ended with a bluetooth speaker playing Bach's Toccata, Adagio and Fugue in C - the music Dad had played in the church while waiting for Mum to arrive for their wedding. That music was the only thing Dad had asked for when my elder brother asked him what he might want. Otherwise, he'd not been very helpful on that score. "I won't be there," he'd said.

It was exhausting and emotional, and I stumbled through the business of speaking to people. The rules don't allow a wake but we managed to have lunch and raise a glass of fizz, and then toasted the new grandchild Dad sadly missed by a couple of weeks. And then another cheer at the news Biden was ahead in Pennsylvania...

I made myself go into the room where he spent his last days, where we'd tended to him, where he died. Mum gave me the book Dad had clung to during his last stay in hospital and then when he'd come home, the last book he (re)read - HV Morton's In Search of England, a battered, cherished copy that Dad's mum bought Dad's Dad for Christmas 1936, when they were courting. It seems to be a book all about a lost but almost tangible past... I've also got one of his bright, colourful ties because he didn't want us wearing black at the funeral, and a couple of plants from the garden.

And then a long drive home through an extraordinary sunset, the last few miles down deserted roads as if it were the dead of night not early evening. There were fireworks all around as I got out of the car, defiant celebration that played havoc with the children's bedtime. So it was straight into that and emails and the various bits of work I'm late on. And so it goes. "It's just we've started a new chapter," as Dad would have said.

He was always keen on meeting bad news with something positive, and we've set up a memorial fund in his name with proceeds going to the charity Sense, whose work he knew first-hand: 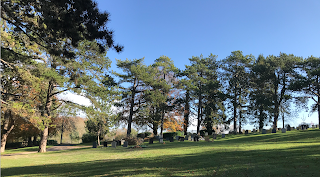 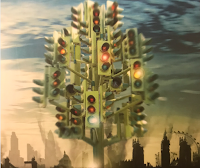 If you are so minded, I've created a Bookshop list of things I've written.

Bookshop.org, which launched int the UK this morning, is an online bookshop "with a mission to financially support local, independent bookshops", according to the blurb. That seems like a good idea.