This week, I helped Kel Winser with a comic-writing workshop for 17 year-olds, run at the Petrie Museum of Egyptian Archaeology. I've done events like this before, and am generally asked in to talk about being a jobbing writer and the sorts of things that come up when I'm writing comics. I also have original artwork from a strip I wrote (drawn by the amazing John Ross from Doctor Who Adventures), and it helps the kids to see the stages the work goes through before it goes to print.

This time we tried something different and I was more involved. Kel asked me to write a script for the attendees to draw. The idea was that each attendee would draw one or two panels each, telling the story between them. They'd have to work together to agree character designs, setting and so on.

The museum was also keen for me to include aspects of Egyptology (and the workshop included an exercise in drawing objects from life), something about modern Egypt, the practice of archaeology itself and the ancient culture of Egypt - which isn't exactly easy in three pages of six panels each. So here's what I wrote:

PAGE ONE (OF THREE) – SIX PANELS

PANEL ONE
Establishing shot: Egypt in the future. A mix of the ancient and the futuristic. Pyramids (not the ones at Giza – something more unusual), but with skyscrapers nearby, and flying cars. Small detail in this: an archaeological dig, with the entrance to an excavation.

PANEL TWO
A dark tomb being excavated. Closed doors with hieroglyphics (or your own strange writing) on them. In front of them kneels a figure, a silhouette, holding a torch as she reads. Though we don't know it yet, she's a woman – but we'll meet MAGGIE in the next panel. There are other archaeologists working nearby.

CAPTION:
Where incredible finds are still being made...

PANEL THREE
MAGGIE lifts a torch to investigate what she's found. She's an accomplished archaeologist, but she's NOT River Song or Lara Croft or any other hero you already know. Her clothes are practical but futuristic. She wears glasses.

PANEL FOUR
Same as PANEL TWO, but MAGGIE pushes the doors with her hand and the doors creak open. We can just see inside parts of the two giant ROBOTS inside.

PANEL FIVE
MAGGIE holds the torch up to examine two huge robots, their designs based on Egyptian gods (you pick which ones). ROBOT 1 and ROBOT 2 look brand new. We need to see their faces, and their blank, staring eyes (to make the next panel work).

MAGGIE:
They're amazing. So perfectly preserved!

PANEL SIX
Close on the robots' faces as their eyes light up. MAGGIE falls back in horror. The ROBOTS speech bubbles are in a different, more mechanical typeface and the bubbles are more square.

PANEL ONE
ROBOT 1 and ROBOT 2 smash their way through the doors and out of the tomb. The archaeologists run away, but MAGGIE tries to keep up with the robots.

PANEL TWO
The ROBOTS stand outside the dig, gazing off at the skyscrapers, the flying cars (as PAGE ONE, PANEL ONE). MAGGIE running after them, struggling to keep up.

ROBOT 1:
How long did we sleep?

PANEL THREE
ROBOT 1 leaning over to look, in amazement, at the reading on ROBOT 2's wrist. MAGGIE tries to intercede.

MAGGIE:
The doors of your tomb were sealed more than 4,000 years ago.

ROBOT 2:
The humans tricked us!

MAGGIE:
What? We didn't do anything!

PANEL FIVE
ROBOT 2 gestures at the skyscrapers, the flying cars.

ROBOT 2:
They locked us away – and built a world of their own!

PANEL SIX
The ROBOTS take to their air, leaving MAGGIE behind.

MAGGIE 2:
What have I done?

PANEL ONE
The two ROBOTS smash a famous landmark from somewhere round the world. The bigger, the madder, the more recognisable, the better.

PANEL TWO
The two ROBOTS destroy ANOTHER famous landmark somewhere round the world. It has to be from a different country than the one in PANEL ONE.

ROBOT 1:
Good to stretch after all that time asleep.

PANEL THREE
The two ROBOTS in the air, one holding on to a warplane, the other smashing into one. Behind them, lots of warplanes attacking.

CAPTION:
The humans try to fight back, but...

ROBOT 1:
Is this the best they can do?

PANEL FOUR
The ROBOTS in the air, the ground below them littered with broken planes and tanks.

ROBOT 1:
Okay. What do we smash next?

PANEL FIVE
From behind the robots as they look down – at a children's playground, with swings and slides, kids playing.

PANEL SIX
The giant ROBOTS... on the swings. Small children stare and point and laugh.

ROBOT 1:
This is amazing! Wheee!

ROBOT 2:
Yeah, okay, humans. You can keep your world.

Make your own comic drawn by Lee Sullivan

In 2007, I devised a task for a comic-writing workshop aimed at teenagers being run by the V&A's Museum of Childhood in Bethnal Green. The following four images by amazing comics artist Lee Sullivan were printed out on postcards.

Use the images to tell a story. You decide which order they go in, and add captions and speech bubbles. You can add to the images or create new panels of your own. You don't have to use all (or any) of the panels. Enjoy.

(Please note: you're welcome to try the task yourself or share it with your friends so long as you don't make money from it. The task and scripts are (c) Simon Guerrier 2007, and the artwork (c) Lee Sullivan 2007.) 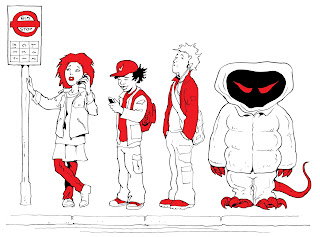 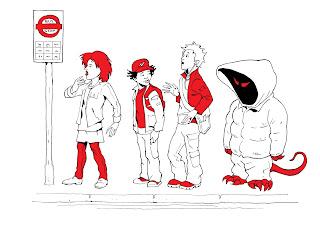 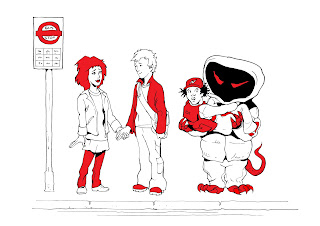 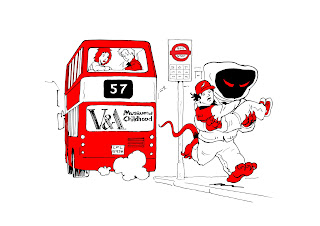 To prove the idea worked, I wrote two short scripts using the images in different combinations. In discussion with the organisers, I avoided super heroes, violence and explosions, and also tried to tie the images and stories to the age and experience of the kids attending. But the kids were (and you are) not limited by those restrictions.

PANEL 1
RED-HAIRED GIRL and BOY IN CAP are on their phones, BLOND BOY is whistling and MONSTER looks at us.

CAPTION:
Just another day waiting for the 57.

CAPTION 2:
With an invisible monster.

MONSTER:
(THINKS): Cor, I’m bored. I’ll use my powers to make that pretty girl see me and fall in love.

MONSTER 2:
Hmf! I’ll just have to eat this one.

RED-HAIRED GIRL:
Is that guy in the hat… flying?

CAPTION:
Waiting for the last bus on Sunday night.

RED-HAIRED GIRL:
It’s been such a great weekend!

PANEL 2
RED-HAIRED GIRL and BOY IN CAP are on their phones, BLOND BOY is whistling and MONSTER looks at us.

BOY IN CAP:
Well how about I stay with you and she takes Blondie home?

PANEL 4
Bus drives away with RED-HAIRED GIRL and BLOND BOY.

BOY IN CAP:
I bet Mum doesn’t even notice.

AAAGH! Davros's milkshake brings all the monsters to the yard! 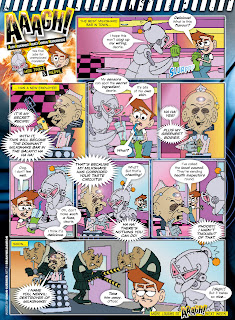 My 36th and - for the time being - final episode of AAAGH!, as featured in issue #280 of Doctor Who Adventures. As always, it's drawn by Brian Williamson and edited by Natalie Barnes, who gave kind permission to post it here. You can read all my AAAGH!s.

ETA: This Cult Den interview with me includes brief mention of AAAGH! and how it came about.
Posted by 0tralala at 11:45 am No comments:

AAAGH! and the Martians 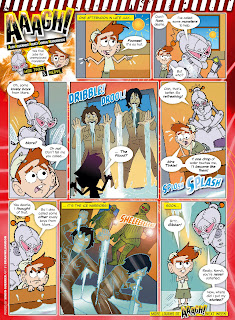 A summery AAAGH! from issue #279 of Doctor Who Adventures, and featuring two lots of Martians (sadly no room to squeeze in the Ambassadors... as well). As always, it's written by me, drawn by Brian Williamson and edited by Natalie Barnes - who gave kind permission for me to post it here. You can read all my AAAGH!s. Tomorrow, Davros's milkshake brings all the monsters to the yard.

Thrilled to learn that the spooky short film I wrote (and appear in), Revealing Diary, will play at the Aesthetica Short Film Festival in York this November. We had a brilliant time at Aesthetica last year, when we took Cleaning Up. We made lots of new friends and won an award which is currently on my parents' mantelpiece.

Also, while we wait to hear how The Plotters has done in the Virgin Media Shorts competition, the Virgin Media people recently chose as their blog of the week a post by our amazing director of photography, Sebastian Solberg, with lots of thrilling behind-the-scenes pics. Including this one of me looking sophisticated: 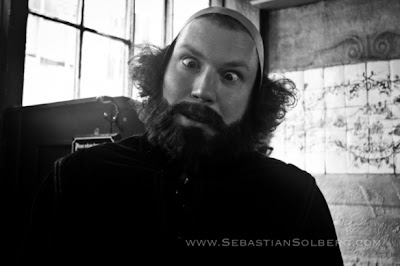 Three new CDs you can buy with your money

I have some more product out with which you can swap you hard-earned cash. 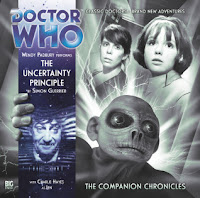 Doctor Who and the Uncertainty Principle is out this month. The Second Doctor Who and his companions Zoe and Jamie investigate a strange death and - long after she's stopped having adventures with the Doctor - Zoe continues her struggles with the sinister Company. It's performed by lovely Wendy Padbury, with her daughter Charlie Hayes returning as Company lawyer Jen. 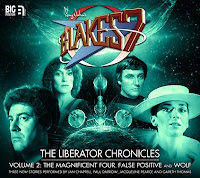 Blake's 7 and the Magnificent Seven is also out this month, as part of the Liberator Chronicles Volume 2. Jenna and Avon meet another band of rebels who are also battling the Federation - and might be doing it better than Blake is. It's performed by Jan Chappell and Paul Darrow. 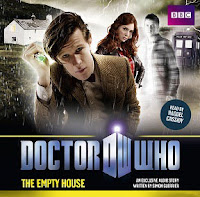 Doctor Who and the Empty House is out next month. When the TARDIS materialises in rural England in the 1920s, the Doctor and his friends Amy and Rory discover a crashed spaceship nearby. It’s the beginning of a nightmarish adventure for them...