Went to see Piccard in Space last night, a new opera by Will Gregory, best known for his work with Goldfrapp. It told the story of Auguste Piccard - inspiration for Professor Calculus in Tintin and, with his brother, for Jean-Luc Picard in Star Trek - travelling up to the Stratosphere in 1931, in a balloon of his own design to conduct an experiment on light that would prove Einstein's theory of relativity.

Einstein appeared, wild-haired and womanising, to explain the experiment - though I only understood it because the same light experiment was the subject of Jim Al-Khalili's brilliant documentary, Everything and Nothing, last week.

Piccard got the audience to sing along to the formula for the deviation of time, there were a few good jokes (a big song about a broken barometer leaking mercury that would eat up the aluminium balloon and so kill our heroes undercut by the mercury being 'hoovered' away by low pressure, or Piccard explaining that he is not from Mars but Belgium), and it was all quite fun.

But the departing audience no wiser about what exactly Piccard had proved or how, or even why Newton was made out to be such a villain. So if the plan was to excite and inspire people who wouldn't normally be interested in complicated physics, it didn't exactly work. Worse, the promised Moog synthesisers never really stood out, and I've seen better lab-coated nerdy performances from the Radiophonic Workshop. (That's still a much kinder response than reviews in the Independent and Telegraph.)

But, prompted by the conductor, we followed the performance by traipsing over to Festival Hall to see the real balloon on display. Small, fragile, primitive, making the achievement and the daring to attempt it all the more extraordinary... A real source of wonder. 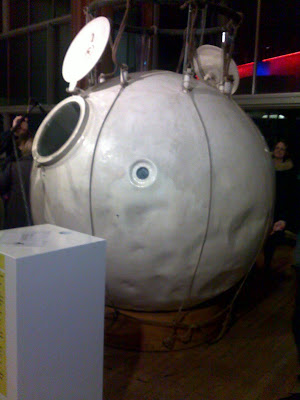