Big Finish have put up Tom Newsom's amazing cover art for Doctor Who - Wicked Sisters, the trilogy of audio stories I've written that is out in November. 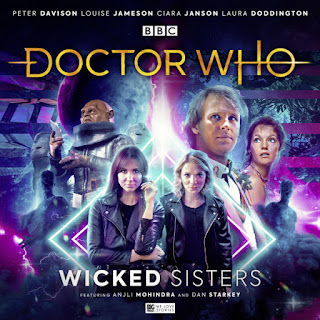 Wicked Sisters stars Peter Davison as the Doctor, Louise Jameson as Leela, Ciara Janson as Abby and Laura Doddington as Zara, with Anjli Mohindra as Captain Riya Nehru and Dan Starkey as the Sontarans. It's directed by Lisa Bowerman and produced by Mark Wright.

ETA The Big Finish website has added a trailer for Wicked Sisters, blurbs for the three stories and a full cast list.

The Doctor is recruited by Leela for a vital mission on behalf of the Time Lords.

Together, they must track down and destroy two god-like beings whose extraordinary powers now threaten all of space and time. These beings are already known to the Doctor.

Their names are Abby and Zara...

1. The Garden of Storms

In pursuit of Abby and Zara, Leela pilots the TARDIS to the eye of a violent storm in time. Yet she and the Doctor find themselves in an idyllic garden city, the people contented and happy. They soon discover that this bliss comes at a terrible cost, and that Abby and Zara are determined to put things right… so how can Leela and the Doctor stop them?

Life is hard for the early pioneers building the first settlements on the Moon. The laws of Earth don’t apply here, and there are tussles over limited resources vital to survival. Arriving on the Moon, the Doctor and Zara discover that an aggressive alien species lies in wait. Yet there’s something very strange about these particular Sontarans: they refuse to fight.

3. The People Made of Smoke

Abby and Zara strive to use their powers for good but it’s clear they are damaging reality - and allowing monstrous creatures to bleed through from beyond. The Doctor knows he can only save the universe by destroying his friends. But just how much might he be willing to sacrifice if there’s a chance to save them?

Edy Hurst's War of the Worlds 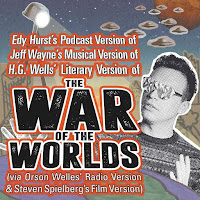 I'm a guest on a special episode of comedian Edy Hurst's podcast devoted to The War of the Worlds, nattering about the life of HG Wells, his influence on George Orwell and on Doctor Who, and some other stuff.

You can still listen to the BBC radio documentary I produced on HG Wells and the H-Bomb, while "Alls Wells That Ends Wells" is an extra on the DVD of 1966 Doctor Who story The Ark:

I'm a guest on the latest Cinema Limbo podcast, talking in detail with host Jeremy Philips about Ryan's Daughter (1970). I'm a big fan of director David Lean and there's a lot of admire about this one, and yet it doesn't quite work. But I think that's what make its interesting.

As preparation, back in March I read The Painted Banquet by costume designer Jocelyn Rickards. But sadly I didn't know about (because it hadn't been released) Paul Benedict Rowan's making of, which details the troubles I had only suspected...

The new issue of Doctor Who Magazine features a cardboard TARDIS set to build, a detailed look at 1964 story Marco Polo and an exhaustive look at the new multi-platform jamboree Time Lord Victorious.
The latter includes a brief word from me, as I've written a short story, Lesser Evils, and edited Master Thief by Sophie Iles. There's also stuff from me in the preview for Shadow of the Daleks. These audio adventures are all out next month.
Posted by 0tralala at 1:11 pm No comments:

V for Victory, by Lissa Evans

Entirely selfishly, I bought this for the Dr's birthday so that I could read it. It's the third in a trilogy, after Crooked Heart and its prequel, Old Baggage - both of which I adored.
We pick up with young Noel Bostock and his adopted aunt Vee - though she's neither of those things officially. Now going under the name Mrs Margery Owens, she and Noel bugger on through the chaos of north London at the fag-end of the Second World War. At any moment of any day, a V2 might fall on them and it's exhausting - not least because the chores and home-schooling must still somehow be done. Still, there's romance kindling in the air for each of them. And then they both stumble into people who know something of their past - and might expose their secrets...

As before, there's a wealth of telling historical detail worked deftly into the breezy tale, which I knocked through in a matter of days. It's so teeming with life and emotion. We really feel the outrage of Winnie the Warden discovering that her harrowing real-life experience has been filletted by her sister for a sexy novel. Or there's Noel's infatuation with a girl who's moved away:

"Noel recognized Genevieve Lumb's neat but forceful handwriting. Even the thought that she had licked the envelope was quite physically stirring." (p. 53).

The remarkable thing is that these extraordinary, unprecedented times feel utterly real. But it's also a delight to spend time in the company of good people just trying to get by, despite all the crap going on.

I was especially moved by the ending, where Vee and Noel face some tricky emotional stuff relating to his biological parents. It's so perfectly done, so impossible to describe here without spoiling. At one point, Vee wonders what might have happened if she'd not made a connection with this awkward teen at a critical moment, how nearly he might have been lost. But we leave them happy, the war over and a new world on the horizon. After all the devastation, what survives is the love.

Where Shall We Run To?, by Alan Garner

My brother got me this as house-warming present. What feels an age ago but was really at New Year, he and I tramped bits of Alderley Edge described here, a not-too-far car journey from where I now live.

The rather fancy, well-to-do area has changed dramatically since Garner's wartime childhood. He vividly conveys dirt and poverty and childhood disease. There's his parents coming to wave at him through a window when he's in hospital with diphtheria, or the childhood friend who he shared adventures with, and,

It's just one example of a devastating punchline. I was particularly hit by his sweet description of the US soldiers stationed nearby, who he'd saluted and call to from his porch as they marched by, and they'd salute and call back as if he were an official watchman. The Yanks include an American despatch rider - "the first black face I'd seen" (p. 72) who is respectful to Garner's mum and gives the boy gum and chocolate, and you feel the connection made, reaching across the ocean from Garner's small, parochial world. It's warm and fun - and then undercut by the final words of the chapter.

It's not just the Yanks who are lost; Garner is mourning people, phrases and ways of doing things long since gone. Not all of it is rose-tinted: there's a constant fear of bullies and fights, the teachers are just as capable of violence, and with the war on there's a constant threat of death - a feeling I think we've got used to living with again recently. It's vividly conveyed from the perspective of a child, too, so we sometimes have to join the dots to understand what's happening, such as how seriously ill he was. He's also not always well behaved, such as when he shoves his friend Harold into a clump of nettles.

At the end, we skip forward many years, to the 50s, the 70s and then beyond, with short anecdotes that pick up on elements from before. The book begins with child-Alan finding what he think might be an unexploded bomb; in 1955 and with experience from National Service, he knows to spot a real one. Then there's a sweet coda to a story about a contest at school, where he finally gets his due prize. And finally, a catch-up with Harold in later life.

Garner won a scholarship when still very young which took his life in a very different direction to Harold's - who bunked off school but retained a connection to the local area which came in useful later. In just a few short lines, he's the vividly realised character, putting a bit of stick into local meetings. My first sense was of Garner's envy. But that's not the raw emotion behind this whole exercise in remembrance. In the penultimate sentence of the book, Garner casually mentions "Harold's funeral". Having walked through the world he was part of, we really feel his loss.

The new issue of Big Finish house magazine Vortex includes me yakking about two things I've written that are out next month.
Lesser Evils is my contribution to the Time Lord Victorious multimedia extravaganza, while The Bookshop at the End of the World is the episode I've written of the eight-episode, eight-author Shadow of the Daleks.
Posted by 0tralala at 9:23 am No comments: