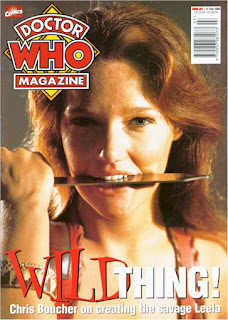 Tonight and tomorrow, BBC Four is repeating the 1977 Doctor Who story The Face of Evil, in which Tom Baker's Doctor meets a new friend - Leela, played by Louise Jameson. I interviewed Louise two years ago for Doctor Who Magazine's essential guide to the companions, and with the kind permission of DWM editor Tom Spilsbury, here it is as published...

"How do I say this?" muses Louise Jameson, who played the Fourth Doctor's companion Leela in 1977 and 1978. "I adore Tom Baker now. I want that to come across in what you put. But at the time, on the show, he behaved very badly towards me and I was very unhappy."

This is surprising given that Leela was perhaps the toughest companion ever to travel in the TARDIS. A fearless warrior from a savage tribe in the far future, she loved to fight the Doctor's enemies and even, sometimes, kill. Indeed, she was named after a terrorist who'd been in the news – Leila Khaled of the Popular Front for the Liberation of Palestine.

"Certainly not back then. I based Leela on a three-year-old who lived upstairs from me and on Bosie, my then dog."

"Bosie was highly intelligent, instinctive, inquisitive," Louise explains. "She was a bassenji whippet terrier. Bassenjis have huge ears and fantastic hearing, and she'd –"

"That came from my dog."

Commenting on Leela's eagerness to kill (rather unusual for a Doctor Who companion), Louise confirms that "Tom hated it. You remember that speech of his in my first story? 'No more Janis thorns – ever!' We wrote that in the rehearsal room."

But maybe he was right to object. Louise considers. "At the time I was too connected to just me and my role to really have an opinion. Now that I'm a writer-director-producer and all those things... No, I don't think he was. Leela needed educating but it could have been done over a more interesting story arc than just one speech."

Louise explains that it wasn't merely Leela's character that Tom Baker objected to. "He wanted to travel alone and refused to be part of the audition process, even though he was invited. Pennant [Roberts, director] read the Doctor's lines. He said he gave me the part because I 'made him work'."

So when did Louise first meet Tom?

"After my final audition, very briefly. Philip [Hinchcliffe, producer] and Pennant took me to the BBC canteen for lunch. Tom was filming that day so they called him over and we shook hands across the table. He was still in costume, that great scarf and coat, and he nearly knocked everything over. Then off he went. The next time was on set at Ealing on the first day of filming. We had a tiny rehearsal in my dressing room where we both made suggestions, with Pennant as referee. Then we were filming it."

What suggestions did Louise make? She takes a moment to remember.

"I didn't understand why Leela didn't run away when she saw the Doctor – who she thought of as the Evil One. I wanted something behind me so I had no escape route. Tom didn't like that and Pennant came down on his side so I had to find a reason to stay. It wasn't difficult: Tom is so charismatic. I thought, 'She's in the presence of danger but her instincts tell her he's not dangerous and her curiosity wins out.' I don't think I've ever told anyone that!"

Louise is a committed follower of Stanislavski's theories on acting. "You need a clear objective for every sentence you say and a clear obstacle to saying it," she explains. "That's where the drama appears. Her desire is to run but this man is fascinating so she can't quite leave."

What tradition of acting does Tom come from? Louise's eyes go wide.

"That's such an interesting question! Tom is very cerebral. He's got the most extraordinary voice, and he's very aware of it. But he'd laugh if you asked if he followed Stanislavski. So would Colin Baker. Yet if you look at their work, I think they follow the rules to a tee. All my work is based on that method." She grins. "It comes into its own when you're working on scripts that don't quite cut the mustard, helps you find a way to make them work."

Louise also refers to Stanislavski when asked about Leela's costume – or lack of it.

"It didn't seem gratuitous. She lived in the jungle and the rest of the tribe wore skins too. But I was very naïve then. It didn't occur to me that I would become some kind of sex symbol. But Phillip knew that taking Leela's clothes off was a good move." She laughs again. "It added 2.5 million to the viewing figures."

In her third story, Leela swapped the skins for a full-length Victorian costume, and in Horror of Fang Rock wore jeans and a jumper. "But they realised the value of Leela in a leotard, so that didn't happen again!" Does she regret that, looking back? "No," she says. "If you want to establish a character, it's good to wear one costume throughout."

Did she ever worry about the message it sent, or her responsibility as a role model to the women and girls who were watching? Louise shrugs. "I worry about the text and whatever it takes to honour the writing. If that means stripping off, putting on a corset or pretending to be a man – I just do it."

So how did it affect her – becoming, to use her own phrase, a sex symbol? Louise smiles. "I have this catchphrase: I helped many a young man through a difficult phase in their lives. I find it quite flattering, to be honest. Though that's probably not the PC thing to say!" 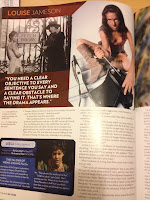 To begin with, Louise wore contact lenses to make her blue eyes look brown. In pictures from an early make-up test, her skin looks very dark. Was Leela intended to be the show's first black companion? It was still fairly common for white actors to "black up" – in Leela's third story, The Talons of Weng-Chiang, the white actor John Bennett was made up to look Chinese.

Louise is candid. "It was never specified with Leela. Quite honestly, in those photos I think the make-up woman just didn't get it quite right. The dark eyes were because, I was told, Leela meant 'dark-eyed beauty'." Again, she considers. "There was always an hour and a half in make-up before I was allowed on set. I wasn't black but it was more than a tan. One of my sons is mixed race – dual heritage we say now. I think I was meant to have that kind of skin."

Louise left Doctor Who at the end of her contract, declining to stay on for another season or to return in 1980 for Tom Baker's final stories. Yet now she's playing Leela alongside him in audio plays for Big Finish. So what's changed?

"I love Big Finish," she enthuses.

But what about Tom, who made her so unhappy? She shrugs. "He said sorry. That's all it took. Now we get on brilliantly. He's a pussycat – and I'm more sure of myself. And despite everything we were – and still are – hugely admiring of each other's work."

He's never difficult to work with? Her eyes glitter as she smiles – a fierce look that's all Leela.

Excitingly, I am a guest on the Infinite Monkey Cage on Radio 4 on Christmas Day. It's a special episode devoted to the science of Doctor Who, which I know a bit about. The blurb goes like this:


"Brian Cox and Robin Ince celebrate the festive season with a look at the science of Doctor Who. Swapping the infinite cage for the TARDIS, they are joined on stage by comedian Ross Noble, Professor Fay Dowker, Oscar-winning special FX director Paul Franklin, author and Doctor Who writer Simon Guerrier and the Very Reverend Victor Stock. They discuss the real science of time travel, the tardis and why wormholes are inaccurately named (according to Ross!)."

My distinguished colleague, Dr Marek Kukula, and I were interviewed by the high-brains called Five Who Fans earlier this year, about our book, The Scientific Secrets of Doctor Who. We responded in our usual highly polished and professional manner.
Posted by 0tralala at 7:12 pm No comments: 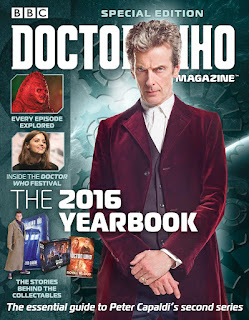 Out in shops from tomorrow is the 2016 Yearbook from the magnificent fellows at Doctor Who Magazine.

Amongst all the fun, there's my interview with stunt co-ordinator Dani Biernat (who I also worked with on the short film Modern Man) about being dropped on her head, and featuring a missing scene from The Zygon Invasion.

There's also my round-up of the awards Doctor Who has been nominated for in the past 12 months.
Posted by 0tralala at 1:58 pm No comments: