I'm having a lovely time working on Horrible Histories magazine at the moment, writing poo jokes and investigating stupid deaths. Today, I've been on the trail of an unusual gift apparently given by Mary, Queen of Scots, to her maid, Mary Seaton.

Search the web and you'll find plenty of sites referencing Mary Queen of Scot's skull watch. They seem to link back to a post on This Write Life from October 2012, but I'm struck by the three images of the watch in that post, reproduced below: 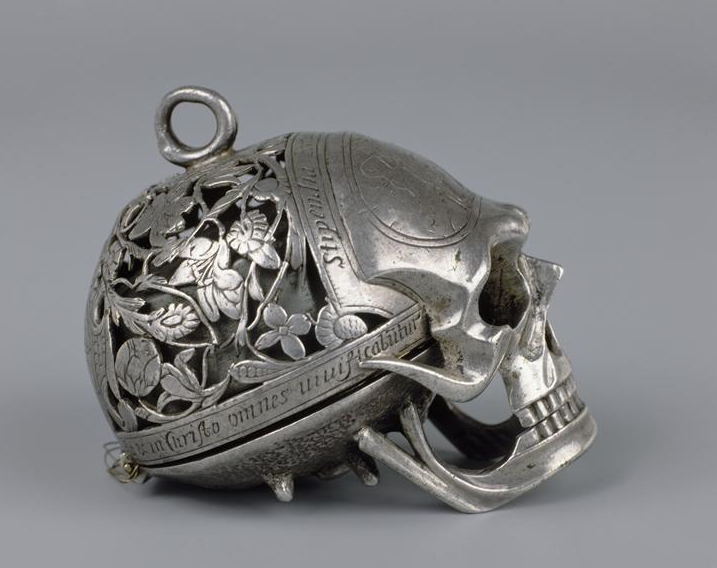 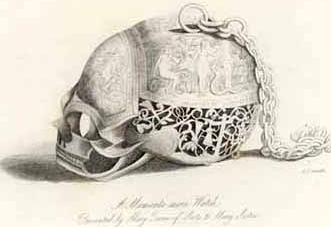 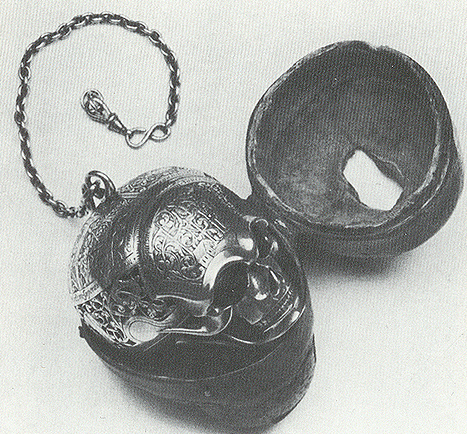 The first image is clearly not the same watch as the other two.

A bit more searching, and the second image appears to be cropped version of one from the Victoria and Albert Museum - an engraving from 1820-35 by Charles John Smith.

The third image, of the same watch in a distinctive holder with a hole in the top, seems to match one in the collection of the Worshipful Company of Clockmakers. There are three images of this particular skull watch on the Bridgeman images site. But the description for each of these says it is not the watch given by Mary Queen of Scots to her maid; it's an 18th century copy made by "Moysant, Blois".

The This Write Life site - and plenty of others that repeat the same information with the same pictures - claims the skull watch to be the work of "Moyant A. Blois (1570-90)". Surely Moyant A. Blois must be related to Moysant, Blois - but is this clockmaker from the sixteenth or eighteenth centuries? Does the original skull watch still exist? In fact, did Mary Queen of Scots really give such a gift, or is it the invention of a later century?

I shall continue to search… But here's a description from an 1894 book that says it wasn't a "watch" as we understand it anyway, but more of a table decoration:

The curious relic, of which we herewith give an engraving, was presented by Mary, Queen of Scots, to her Maid of Honour, Mary Seaton, of the house of Wintoun, one of the four celebrated Maries, who were Maids of Honour to her Majesty.


"Yestreen the Queen had four Maries,
The night she'll hae but three;
There was Marie Seaton, and Marie Beaton,
And Marie Carmichael and me."

[Illustration [++] Memento-Mori Watch.] [SG: I assume this is a version of the Charles John Smith engraving.]

The watch is of silver, in the form of a skull. On the forehead of the skull is the figure of Death, with his scythe and sand-glass; he stands between a palace on the one hand, and a cottage on the other, with his toes applied equally to the door of each, and around this is the legend from Horace "_Pallida mors æquo pulsat pede pauperum tabernas Regumque turres_." On the opposite, or posterior part of the skull, is a representation of Time, devouring all things. He also has a scythe, and near him is the serpent with its tail in its mouth, being an emblem of eternity; this is surrounded by another legend from Horace, "_Tempus edax rerum tuque invidiosa vetustas_." The upper part of the skull is divided into two compartments: on one is represented our first parents in the garden of Eden, attended by some of the animals, with the motto, "_Peccando perditionem miseriam æternam posteris meruere_." The opposite compartment is filled with the subject of the salvation of lost man by the crucifixion of our Saviour, who is represented as suffering between the two thieves, whilst the Mary's are in adoration below; the motto to this is "_Sic justitiæ satisfecit, mortem superavit salutem comparavit_." Running below these compartments on both sides, there is an open work of about an inch in width, to permit the sound to come more freely out when the watch strikes. This is formed of emblems belonging to the crucifixion, scourges of various kinds, swords, the flagon and cup of the Eucharist, the cross, pincers, lantern used in the garden, spears of different kinds, and one with the sponge on its point, thongs, ladder, the coat without seam, and the dice that were thrown for it, the hammer and nails, and the crown of thorns. Under all these is the motto, "_Scala cæli ad gloriam via_."

The watch is opened by reversing the skull, and placing the upper part of it in the hollow of the hand, and then lifting the under jaw which rises on a hinge. Inside, on the plate, which thus may be called the lid, is a representation of the Holy Family in the stable, with the infant Jesus laid in the manger, and angels ministering to him; in the upper part an angel is seen descending with a scroll on which is written, "_Gloria excelsis Deo, et in terra pax hominibus bonæ volu----_" In the distance are the shepherds with their flocks, and one of the men is in the act of performing on a cornemuse. The works of the watch occupy the position of the brains in the skull itself, the dial plate being on a flat where the roof of the mouth and the parts behind it under the base of the brain, are to be found in the real subject. The dial plate is of silver, and it is fixed within a golden circle richly carved in a scroll pattern. The hours are marked in large Roman letters, and within them is the figure of Saturn devouring his children, with this relative legend round the outer rim of the flat, "_Sicut meis sic et omnibus idem_."

Lifting up the body of the works on the hinges by which they are attached, they are found to be wonderfully entire. There is no date, but the maker's name, with the place of manufacture, "Moyse, Blois," are distinctly engraven. Blois was the place where it is believed watches were first made, and this suggests the probability of the opinion that the watch was expressly ordered by Queen Mary at Blois, when she went there with her husband, the Dauphin, previous to his death. The watch appears to have been originally constructed with catgut, instead of the chain which it now has, which must have been a more modern addition. It is now in perfect order, and performs wonderfully well, though it requires to be wound up within twenty-six hours to keep it going with tolerable accuracy. A large silver bell, of very musical sound, fills the entire hollow of the skull, and receives the works within it when the watch is shut; a small hammer set in motion by a separate escapement, strikes the hours on it.

This very curious relic must have been intended to occupy a stationary place on a _prie-dieu_, or small altar in a private oratory, for its weight is much too great to have admitted of its having been carried in any way attached to the person. 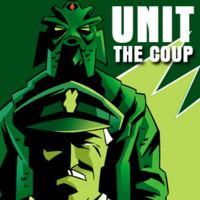 Big Finish are celebrating 15 years of making Doctor Who stories on CD, and asked me to write something about the UNIT spin-off series from 2005, which they're flogging for £1 each today.

I wrote the pilot episode, The Coup, given away with Doctor Who Magazine in December 2004. It was the first of the 40+ audios I've written, so has a lot to answer for... You can listen to The Coup for free, plus here's me on what I hoped might happen next...
Posted by 0tralala at 10:07 am No comments:

Next week I'll be at the mahoosive science-fiction convention, Nine Worlds. The week after I'll be at the even more humungous Loncon. On the off-chance you care, here's where I'll be and when…

(My schedule on the Nine Worlds site.)

(The Dr will be delivering Monsterclass: Archaeological world building at 3.15.)

Writing for Transmedia: ideas that cross formats and boundaries (Books/Creative Writing)
Friday 8 August 18.45 - 20.00
Because a story can also be an app, computer game, vlog, fanvid, web series, docu-drama, interactive ebook, diary comic, inter-sensory experience or any other format currently existing or yet to exist not listed here. Kind of against the spirit of the thing, if you ask us. Guess you’ll just have to go to it in person.
Panel: Barry Nugent, Anna Caltabiano, Simon Guerrier, Adam Christopher

Anytime, Anywhere (Doctor Who)
Sunday 10 August 10.00-11.15
The Doctor can travel anywhere in time and space, and the pure historical story was a regular occurrence in the early days of the show, but has been seen only once since 1966. Would a pure historical work in today’s Doctor Who? Is there any time or place the Doctor should go that he hasn’t yet? Which historical figures does he really need to get around to meeting?
Panel: Simon Guerrier, Adam Christopher, Joanne Harris, Anna Jackson

A Handy Guide to the Wilderness Years and Beyond (Doctor Who)
Sunday 10 August 13.30 - 14.45
Doctor Who isn’t just a telly show, it’s also books, audios, comics, webcasts, and computer games. In the nineties, these non-telly sources were the only place you could get (official) new Doctor Who stories. For telly fans looking to step into the worlds of book and audio, where do you even start? Our panel talks about the highs and lows of non-telly Who, and where you can find the good stuff.
Panel: David Bailey, Sarah Groenewegen, Rebecca Levene, Simon Guerrier, David McIntee

Representation of Gender Roles (Doctor Who)
Sunday 10 August 15.15 - 16.30
From rejection of the fifties ‘feminine mystique’ to Sarah Jane’s explicit rejection of seventies patriarchy. Ace and Rose are working class heroes. Madame Vastra and Jenny are a married interspecies couple who fight crime, and aliens, in Victorian London. How successfully does the show challenge prevailing gender norms? Where does it succeed best? Where could it do better?
Panel: Simon Guerrier, Angela Blackwell, Una McCormack, Amy


(My schedule on the Loncon site)

Children's something or other
Thursday 14 August 14:30
I've been asked to talk to a children's workshop about what I do. Lucky them.

Doctor Who: Fandom for the Whole Family
Thursday 14 August 16:30 - 18:00, Capital Suite 10 (ExCeL)
Doctor Who is an international cult hit phenomenon that began when the First Doctor landed the TARDIS on British soil in the 1960s and captured the hearts and minds of a generation. The Doctor's companions, from Susan to Adric, from Zoe to Amy, have often been teenagers or children, a surrogate 'family' that brings the family together as our Doctors regenerate into our children’s Doctors—generation after generation. What is it about Doctor Who that attracts younger fans? Why do they identify with a thousand year old Time Lord? What was the Doctor like when he was a teenager? Panelists discuss the ageless and timeless appeal of Doctor Who, especially among younger fans and their families.
Panel: Jody Lynn Nye, SJ Groenewegen, VE Schwab, Kathryn Sullivan, Simon Guerrier

Awards and Their Narratives
Sunday 17 August 10:00 - 11:00, Capital Suite 10 (ExCeL)
As one of Saturday's panels discussed, many factors come into play when judges or voters decide which books to recognise with awards. But what happens afterwards, over the years, as the list of winners grows? As an award develops a "canon", patterns will emerge, different maps of what we should be valuing in science fiction and fantasy. This panel will discuss the maps drawn by different genre awards -- from the Hugos to the Clarkes, from Tiptree to Translation, from Aurealis to BSFA -- and the ways in which readers make use of them.
Panel: Tom Hunter, Simon Guerrier, Stan Nicholls, Dr Tansy Rayner Roberts, Tanya Brown