Egypt in a hedge

On Saturday, I went to see Paul Cornell in Faringdon, about 17 miles out of Oxford. There was quite a lot of lager and a furious game of Spoof (where you have to guess the totals of everyone's 0-3). And the next morning, after a late but hearty breakfast and the minute's silence, I was taken for a quick gander round the local highlights. 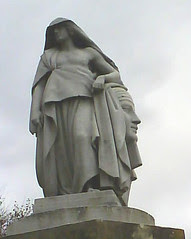 We admired the spindly folly, which only got planning permission on the proviso that it also had a wood planted so people wouldn't actually see it. I took a picture of the statue called Egypt apparently "rescued" from the Crystal Palace.

Since I'm usually rubbish at taking photos, I'm really rather pleased with how this one came out. Especially since it was taken on my Sony Ericsson flip-phone. (I have looked to see what make it is, but it doesn't seem to say. "M2" seems to be the type of the battery. But is a black phone, with large friendly keys.)

My host then took me into the churchyard to see a cannonball lodged in the side of the wall. Gobber Cromwell apparently had a battery of guns placed where the folly now stands. Only the cannonball is not the relic of the civil wars - it was put there by some eminent Victorians to make the church more exciting.
Posted by 0tralala at 1:28 pm

PS You can tell me to stop making nonsensical comments at any time.

I like nonsensical comments. But oddly the link in your name doesn't lead me to your blog but to a message that you want to be secret.

It doesn't lead me to anything, but I'll stop using it just in case.

Gobber balls turn up in the most unlikely places. For instance one time in Paris, just when it was getting dark and no one was around...