"Oh yes, you're a Banks groupie," said my former tutor when we bumped into each other last night - the first time I've seen him since I graduated in spaceships. We, and a few other people, were at Imperial College to hear Farah Mendlesohn interview Iain Banks.

Farah suggested that there was a lot of bodily detail in his books: we know what different characters are like in bed, what torture feels like, even how Frank in The Wasp Factory gets splashback when sat on the toilet. Banks argued that this stuff is part of everyone's lives, but is politely excised from most writing. He talked about the importance of "truth" in writing, but I think this vivid lubricity of detail matters in his work because it pulls us in close to the characters. It's part of what makes his writing so intimate, like he's writing this just for you.

This maybe also squares with Farah's observation that he's more reticent about the sex in his sci-fi; the people in space are more unknowable other than the everymen of his mainstream. Maybe.

It was also of great excitement to hear that he's not yet finished with the Culture - his joyous, utopian mish-mash who return in the forthcoming Matter. A colleague who's normally much above this sort of thing actually, genuinely squeeed when I told him this; he'd believed Look to Windward was a final word on the subject, and that The Algebraist was the first of a new series. Banks explained he'd maybe return to that universe if he could come up with a good enough plot, but that the Culture is where his heart is. Writing other stuff is more about professional pride - that he can write something else - rather than being Cultured out. Hooray! 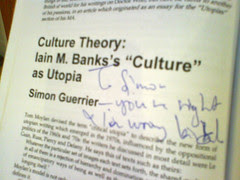 Afterwards, Banks was happy to sign people's long clutch of books and to acknowledge my own merry genius. I plan to write up a sequel to that paper which will examine the three Culture books published since I wrote it, as well as what clues might be garnered from Walking on Glass and The Bridge, in which the Culture perhaps sort of maybe make cameos.
Posted by 0tralala at 10:53 am

Just struggling toward the end of "Use of Weapons" now. I'm afraid I'm never going to really 'get' it. "Player of Games" I quite enjoyed, though.

Essentially the Culture seems to me to be rather like that Monty Python world where everyone is Superman. I always find it hard to empathize with omnipotent characters. As a 20th Century capitalist bastard once asked Jean-Luc Picard; "What's the challenge?"

Banks' sex - hmm. Like many SF authors before him (Heinlein being the obvious example) I don't think he escapes from his own fantasies. The easily-reversible sex-changes just add another layer of hedonistic wish-fulfillment to the whole post-AIDS jones for consequence-free ecstasy.

And if I can't write a sentence without five hyphens, I think it's time to shutup.

Though the wish fulfilment is - as Bank acknowledged himself last night - a lot of the appeal. And also ALL the Culture stories are about them jarring with other peoples, people who see things differently or who point out their flaws. It's a very self-critquing and complex utopia, as mine academic paper argued.

I know it's not what you're saying, but I want to spend time in the Culture BECAUSE it's so happy and nice. Did you ever manage The Also People?

I take the point - certainly, in "Consider Phlebas", the Culture were basically the Bad Guys.

No, I never got as far as "The Also People". I always assumed the title came from "The Restaurant At The End Of The Universe"...?