A long day yesterday in the fens, cobbling together research. There's this thing I've got in mind that needs me doing some reading. Got to the Cromwell Museum in Huntingdon pretty much as it opened and made a lot of notes. The place is about the size of my living room, but free and crammed with useful things. And there's two whole portraits of... what it is I'm interested in. The helpful fellow behind the counter looked up some stuff for me, too. And on the way back to the station I had a quite nice pasty.

Train to Peterborough (where, annoyingly, I could have looked something else up; though I only realised that a couple of hours later), and then a long wait for a train to Ely. Lots of grumbling from lots of people with luggage who were late getting to Liverpool and Stansted.

M. joined me at Ely and we took the scenic route into town, along the river and through the jubilee gardens. Oliver Cromwell's old house is also the tourist infomation centre, a stripey old ex-pub now full of posh jams and chocolate. We paid the £4 each for a tour, and were narrated through wood-pannelled rooms with dwarf-sized interconnections. Made some more notes, watched a film about drainage narrated by John Craven, giggled in the "haunted" room and tried on lots of hats. 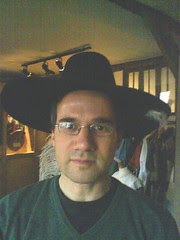 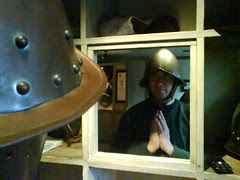 (M. took plenty more of me looking foolish, which I'll post when he bungs 'em over.)

We then poked our heads into Ely Cathedral, but thought it all too expensive to go further. Some school girls amused themselves with the floor-set labyrinth and M. explained that the cathedral's tower is the "lantern of the fens". John Craven's film had shown us how Ely used to be an island, and even as recently as 1947 suffered 100 square miles of flood.

Pottered down the high street, which set off alarms bells in me 'cos I grew up in a similar cosy market town. The same genteel, Georgian (I guess) buildings that are now Woolworths and Clinton Cards. Was just about to say that there didn't seem anything for the young folks when we spotted some teens looking bored outside the Spar.

Stopped off at the pub and then a slow journey back to London on a train with an ever-in-use loo. Thence to Nimbos for bacon sandwiches, 'cos we are so daring.
Posted by 0tralala at 10:56 am

You should go up the Cathedral tower, if it's open: it's expensive but so worth it, both for the view inside from the top of the octagon and out over the fens.