Amongst Our Weapons, by Ben Aaronovitch 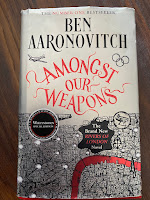 I loved this latest entry in the Rivers of London series, with Detective Constable Peter Grant on the trail of a vengeful angel linked to the Spanish Inquisition (hence the title). The case involves a trip to Manchester and Glossop, and lots of good twists and turns, with Ben - as ever - keeping the magic stuff grounded in the real. Police work is, it seems, based on knowing the nearest location of "refs" (ie coffee and snacks).

What I especially like is how this standalone adventure still moves the series on, with Peter's imminent fatherhood creating ripples for the whole series, and then a quiet word from another character at the end promising more radical shake-ups to come. I also really like the sense of Peter trying to make connections between different magical communities, breaking down the idea so common to fantasy of wizarding as an elite.

The Waterstones edition includes a bonus story, "Miroslav's Fabulous Hand", narrated by Peter's mentor Nightingale and set just before and then during the Second World War. It's thrilling in itself - like an old-school James Bond adventure - but also exciting to see some of Nightingale's early life in more detail. This sort of thing could support a whole novel of its own. (See also what I said about the recent novella, What Abigail Did That Summer.)

By coincidence, I finished this while the Dr is on holiday in Thessaloniki, which is where I was in 2011 when I read the first Rivers of London book. By coincidence, the Dr now works at one of the places featured in this new book. By coincidence, as I was making my way to the Nigel Kneale centenary event last week, I got to the reference on page 218 to "the original Quatermass".