What Abigail Did That Summer, by Ben Aaronovitch 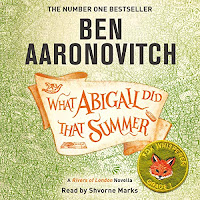 Oh what joy, a Rivers of London adventure we could share with the ten year-old as we drove down to my mum's for the Easter weekend. We thought we'd try it and see how he got on - and how suitable the content might be - and very quickly he was hooked.

Abigail Kamara is Peter Grant's 12 year-old cousin, as featured in several of the books about Grant, a London copper who investigates weird bollocks. This novella is what happens while Peter is away in Hereford (during the events of Foxglove Summer), looking into the disappearance of a bunch of kids her own age from Hampstead Heath. There's some suggestion this is going to riff on Pied Piper of Hamelin but it goes more The Stone Tape, but full of the usual smart, funny observation that makes the main series so compelling. There's a posh boy called Simon who prefers climbing trees to school work which particularly struck a chord.

Shvorne Marks is an excellent reader, with dour footnotes provided by Kobna Holbrook-Smith (who usually narrate's Peter's audiobook adventures). What strikes me is how easily Abigail could lead further adventures - as could many of the other rich and well-drawn characters in the series. Ben has created a whole world, one that could survive the death or retirement of its lead character. I'm all too aware off that as I begin Amongst Our Weapons...

On other titles in the series: