Yesterday, I got to walk through the very first tunnel built under the Thames. Built between 1825 and 1840 by Marc Brunel and his son Isambard, it was bought by the East London Railway Company in 1869 and made part of the East London line.

It's been closed since 2007 for major refurbishment and opens again in May as part of the Overground network (which runs about 600 yards from my house). I hope it will then be tweeting.

Yesterday was a last chance to walk under the river. This was, of course, magnificently exciting. 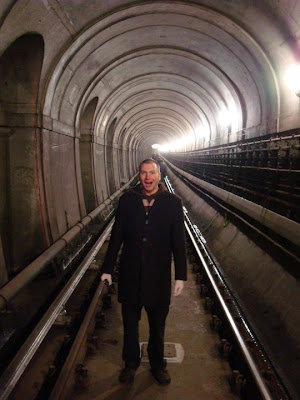 Photo by Nimbos. More photos of the tunnel on Facebook for those as fancy.
Posted by 0tralala at 2:34 pm

The Witchcraft role-playing game - the person running it had them hiding in that very tunnel. Hope you didn't run into the one that got away.

Wish I'd really been there...I'm jealous.

(And today's verification word is "spughtfu" pronounced "sput-fu" - a martial art based on phlegm.)

I am giggling at your face. It's very "ZOMG I R IN T'UNDERGROUND!". Also, it's a gorgeous snap.

Have I mentioned I'm incredibly jealous? Cos I am, y'know. Just in case you weren't aware.