Just this second handed in a script, to find that Big Finish have announced the Graceless mini-series. The three CD box-set is written by me and stars Ciara Janson and Laura Doddington as a pair of troublesome sisters packed with special powers. 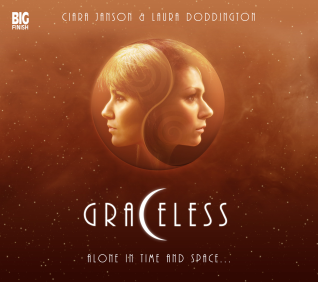 I created the characters for the Doctor Who mini-series the Key 2 Time; this is them gallivanting off on their own.

Guest stars include David Warner, Patricia Brake and that nice Alex Mallinson in the pivotal role of "Nicholas Payne". Alex has also designed the rather lovely cover.

All very exciting to be able to speak of it. And the series will be launched at the HurricaneWho convention in Florida in October. Dang, I'll probably have to be there.
Posted by 0tralala at 2:51 pm

Oooh wow you should be proud.