Tutored in the ways of righteousness 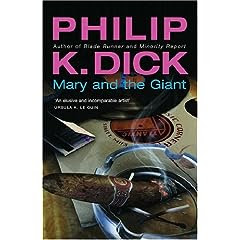 Mary and the Giant is one of a small number of non-sf books by sci-fi freak-boy Philip K Dick (author of the cray-zee tales that became Blade Runner, Total Recall, Minority Report and A Scanner Darkly). Most of these “mainstream” efforts, including Mary, were published after his death in 1982 (just prior to the release of Blade Runner “introduced his vision to a wider audience” – as the biog in the back of the book says).

I first read Mary when I was 17, as part of a cache of the Dick Good Stuff bequeathed by a wise mate at college. I’d remembered it fondly, but on rereading it find how little of the plot I retained.

Mary Anne Reynolds is 20 years-old and living in a small town not far outside San Francisco. She’s bored and restless and a bit difficult, and looking for ways to escape. To begin with, it looks like the giant Black singer, Carleton Tweany, might be her way out. But when Tweany ditches her for another, married woman, Mary Anne’s best hope is the 58 year-old Joseph Schilling, who’s just opened a record shop in town…

Was a bit surprised about how little Tweany, the giant of the title, features – disappearing entirely for most of the latter half. It’s Schilling’s relationship with Mary that’s more important; his grooming her to work in the shop, to appreciate music, to want more from life. It’s through Schilling that we come to understand Mary, her irascibility and constant flight from commitment, even from those who want to help her.

“If she were let alone she would recover. If she had always been let alone she would not need to recover. He had been trained to be afraid; she had not invented her fear by herself, had not generated it or encouraged it or asked it to grow. Probably she did not know where it came from. And certainly she did not know how to get rid of it. She needed help, but it was not as simple as that; the desire to help her was no longer enough. Once, perhaps, it would have been. But too much time had passed, too much harm had been done. She could not believe even those who were on her side.”

But what I also think I missed the first time round was the constant tension and paranoia. Yes, there’s a murder attempt and a bloke gets killed, and there’s the casual, sexual violence threatened by Mary’s father. But there’s even threat in the quietest of moments: the stench of new paint in an otherwise perfect apartment; Mary’s ignorance among the experts on music; and the general horror that a white girl might choose to live in the “coloured neighbourhood” – a horror only Mary seems to miss. Seems, because it’s this wilful running into danger that Schilling slowly comes to comprehend.

It’s the paranoid tension that really makes the book something special, a vivid and enthralling read. But I think at 17 I maybe missed that aspect, and mistook her awkward restlessness for teenage despair at grown-ups.
Posted by 0tralala at 12:52 pm

I read "Flow My Tears, The Policeman Said" in my teens, and I think it poisoned me againstt PKD for life. In fact, it pretty much kiboshed my tolerance for unstructured narrative there and then. I really wish I'd read some Joyce first...

I have managed to struggle through "Do Androids..." and a fair chunk of his short story collections, but only so I can say that I have, really.

Oh, and I think you missed "Paycheck" and "Impostor" in your PKD movies list. Isn't "Next" one of his, too?

Ah, well. I am aware he can be an acquired taste. And, as I have said before I've found a great deal of his stuff disappointing myself.

And some of his stuff is not merely a bit wobbly but downright nasty. The short "The Pre-Persons" is worth a look on that score.

And yes to them other movies, but they are Not Cool.

I think I first read 'Now Wait for Last Year' when I was 15 or 16 and followed it up with 'Do Androids...' long before I saw Bladerunner (remember being faintly disappointed by the film the first time, actually).

So, I'm a big fan. Hmm. 'Fan' may be too strong. I like his writing. Most of it. Some stories are just too - what's the word - dull? Plodding? Overwritten? Something like that anyway. 'The Divine Invasion' being a case in point, I think. I did love 'The Cosmic Puppets' and could easily see this being a film.

Haven't embarked on any short stories as yet. Love H H Munro for them.

I've never been disappointed in PKD - there was a cracking ARENA programme about him quite a few years back. Very few authors I class as genius - PKD is one. My first was THE ZAP GUN and I loved the much more lowkey DO ANDROIDS DREAM OF ELECTRIC SHEEP to the big sci-fi ness of BLADE RUNNER. That said TOTAL RECALL is a lark...

Oh, and I think you missed "Paycheck" and "Impostor" in your PKD movies list. Isn't "Next" one of his, too?

"Next" is based on a short called "The Golden Man". Among others, there's also movie versions of stuff as diverse as "Confessions of a Crap Artist" and "Second Variety" (filmed as "Screamers").

But to Simon's point - a fair bit of PKD's stuff is indeed all over the map, but it's the flashes of mad genius that make it worth searching out the best works.