We have been visited. First on Monday, J. arrived from Bath (and more usually the USA). She had not seen our flat before, nor our William Morris wallpaper and cat, and there was much catching up and gossip over good asparagus lunch. It was the first time J. had been so long away from her two year-old, so it was all quite something.

Once the Dr left with, I did washing up and working, and was on the phone with work things when I should have been collecting my South African cousin. N. and her friend S. are into the last leg of a European tour, and came to me having done Paris and Dijon and Venice and Rome (and also London and Cambridge). We did food and then, when their plans to meet up with other South Africans didn’t work out, took them to the Dolphin. We sat outside in the swish new garden, and pretended not to be freezing.

Yesterday was N’s 20th birthday, and I’d promised her and S. a tour. They’d already seen Buckingham Palace and Kensington Gardens, and we’d agreed we’d do museums if it got rainy but otherwise try to be outdoors. So…

Train to Victoria, tube to Embankment and then the Golden Jubilee pedestrian bridge (east side) over the river. Pointed out that the Embankment is a great big sewage pipe you can walk about on top of, and also Cleopatra’s Needle. By the time we reached the far side of the river, we were looking out for the Anthony Gormley figures stood iconically on rooftops.

Having pre-booked no-nonsense tickets, we were pretty quickly on to the London Eye, sharing our cabin with some very excited kids, keen to point out their estate. Tried to point out things of interest: Nelson’s Column and Downing Street, and the clock tower of St Pancras (made famous by H. Potter).

After that we followed the south bank past the new spangly Festival Hall, the National Film Theatre, the National Theatre and along past the shops and the Oxo Tower to the former Bankside Power Station. This is now Tate Modern, and we mooched around a free exhibition about Global Cities all round the world. N. got a bit weirded by a series of photos of her home town, just showing security warnings (see the Johannesburg section of Diversity).

Out into the sunshine again and across the Millennium Bridge and up the stairs to St Paul's cathedral. Didn’t get the Whispering Gallery to work, but we did clamber all the way to the top for some spectacular views. We were about as high up as we’d been on the Eye, only a lot more sweaty for it. 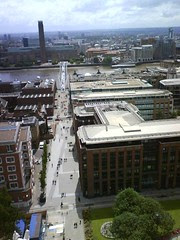 Had trouble making the low-ceilinged descent, and we moved pretty swiftly through the crypt and out to find a quick something for lunch. It threatened to rain as we ate, but the sun came out again as we headed down Cheapside. I pointed out the Church of St Mary le Bow, and explained about how it works with cockneys. Got sight of the Bank of England, then headed right to Cannon Street, passing the monument to the unknown wanker.

Made our way to the Monument commemorating the Great Fire of London in 1666, though the girls oddly declined the chance to climb to the top. Instead we carried on down river, weaving down between the old Billingsgate fish market and the old customs house, and then getting to walk round the perimeter of the Tower of London, getting up on to Tower Bridge and following it north to Tower Gateway station.

DLR’d through all the Docklands developments (passing the new Billingsgate before cutting through the inside of One Canada Square) to Island Gardens, a much more crowded journey than I’d expected to the girls didn’t get to sit at the front – which is the coolest thing. We looked out on the all the new high-rise developments with their expensive views of water, then got out at Island Gardens. Having enjoyed the view of Greenwich, south across the water, we took the foot tunnel (yes more steps), and emerged where the Cutty Sark isn’t.
Took them into the grounds of Wren’s old naval hospital (now the University of Greenwich), and to the bit of street used in Emma Thompson’s Sense and Sensibility. We then headed across the road to the Maritime Museum, and had a look round the bits of the Queen’s House used in the same film, and the Orangery (where I got married). They had then had enough of climbing things, so we didn’t do the steep hill to the Royal Observatory, but crossed the line of longitude as we made our way to the pub. Took them to the Trafalgar (where I had my wedding reception). They drank Smirnoff Ice.

It was about four as we headed back along the river and got ourselves onto a slow boat back to Westminster. We sat out on deck, which was blowy but blue-skied. I pointed out the traffic-light tree just down from Westferry Circus, and good pubs like the Captain Kidd. From the stop at the Tower of London, one of the lightermen took over the commentary, explaining about bridges and buildings. I think my Top Facts were a little more accurate, but his jokes got bigger laughs.

Eventually got to Westminster Pier, and headed back down the Embankment where I got to point out one of my favourite statues: a pilot with broken angel’s wings, commemorating the Fleet Air Arm.

Took the western pedestrian bridge back over to Festival Hall, and met Nimbos for a couple of bottles of vino. Discussed options for the evening, and decided to head home for N. and S.’s first ever go at fish and chips, plus a call to parents. Ended up boozing and watching telly.

N. and S. left this morning – and sneakily left money to pay for yesterday, the minxes. I have washed and tidied but not entirely Dysoned. All in time for the Dr being back from speaking wisdom in Bristol tomorrow… And now, though it was reckoned we would finish work about half eight this evening, it looks like we’ll be here another hour at least… Ng.
Posted by 0tralala at 10:12 pm

Plus confirmation of what chapters are going to go where and wehen.

PS. I knew blogs were good for something.