As wet as a fish's wet bits 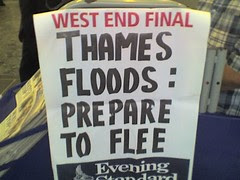 The deluge continues, and there are mad pictures of Reading, with the cinema I used to go to and shops where I'd buy milk now under feet of water.

The expected bank-bursting of the Thames last night seems, thankfully, not to have happened. M'colleague Matthew Sweet took the picture showing how the Evening Standard boldly and nobly takes such matters on the chin.

This reminds me of another billboard from when the London Underground was flooded with Yeti.

The press have had fun explaining why it's been so wet, and the new PM was live on telly in the gym yesterday talking tough about water and the causes the water. But he's pressing ahead with plans to build more houses on flood plains. Those who've suggested this might not be the wisest bit of genius ever - that flood plains are called flood plains because they, er, flood - are being accused of "playing politics". Not, you know, fulfilling a consititutional obligation to oppose the Government when they are silly.

Still, I suspect policy will be re-shaped anyway, not by the Government but by the money. There are estimates of claims to come of £2 billion, which could have the same knock-on effect on the economy as a whole as did the hurricanes and disasters of the late 80s. More importantly, it was the problems of insuring any workplace that allowed smoking (because of subsequent claims from workers on health grounds) that ultimately got smoking banned - where years of moral and medical lobbying had failed.

Am intrigued to see how the former Chancellor, with his reputation so tied to the health of the economy, weathers the ensuing financial storm.
Posted by 0tralala at 8:54 pm