Have been away this weekend in Athens – which meant some last-minute frantickery to get Things Done, and sterling effort from some people I work with.

The Dr used to make pilgrimage to Greece every year, but it all got too expensive in the run up to the Olympics, so this was our first trip together since 2003. (She and the second wife did manage a trip to Lesbos in May 2005; they went to a bar guarded by a dog that barked at men, and to a petrified forest like on Skaro.)

It’s all a lot smarter and more organised, as a result of the Olympic developments, while still being a bit shambolic in places and with building works going on just everywhere. The new and improved underground network is exemplary – the Dr’s extensive tour included a stop off at Syntagma Square station, where the mezzanine down to the platforms includes exhibits of old stuff found on the site.

Having dumped bags at the nice and central hotel (just up the street from Monastriki), we ventured out into the sun and the ruins. Was a bit pleased to find I knew my way about, though I missed the intended lunch stop-off by 100 yards.

Took it easy to begin with and explored the Agora – the remains of the Athenian market place. Here Socrates and the other citizenry would discuss politics and philosophy and shagging – as detailed with quite some accuracy in Mr Handcock’s “The Oracle of Delphi”. 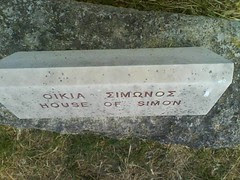 Wished I’d known when I was editing that about the House of Simon of the site. Simon was, the Dr informed me, a cobbler, a citizen and talker, and gets a mention in Xenophon. Was obliged to pose for photos.

We siesta’d then went out for a few early evening beers, and collapsed into an early night.

Saturday was baking, and we did the Byzantine and Cycladic museums in the morning – which were full of impressive artefacts and interpretation. The Dr bought a few heavy books, which I had the foresight to lug back to the hotel before venturing any further.

Re-met the Dr and Mum at the Temple of the Winds (having spent a good while trying to locate the way in), and we began the long trek up to the Acropolis. It’s a steep, hot, winding path up there, and a detour round to the Dionysus theatre proved much further and more up-and-down than expected. But we marvelled at the theatre in which so many classics were first played and told ourselves it was worth it. 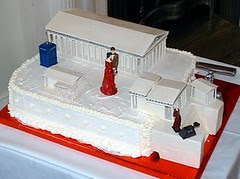 With grumbling knees we reached the rock’s summit. Parents were suitably wowed - Dad, who’d never been to Greece before, had studied these buildings carefully when modelling our wedding cake.

The Acropolis itself was much improved site since we’d last been, though there’s still a lot of work ongoing. Odd to see the temple to Apollo Nike in bits. They’ve been repairing the stuff, putting in new marble to piece the Parthenon back together – so it’s all in a better state and more complete than ever. All the new stuff is clearly discernable by being a slightly different colour.

It’s controversial work, but the place was falling apart anyway, so it seems it’s either this or letting it collapse. And the small temple to Poseidon (whose Caryatids can be seen copied in the church at St Pancras) is now, you know, a temple now, and not just the crude impression of one.

We admired the views and took plenty of pictures. The Dr guided us through, explaining the pre-Classical stuff in the museum. This is stuff excavated from the site – long after us Brits had been stopped nicking things that were not always lying around. (I may be misremembering, but the site is much tidier, with none of the strewn stones and rocks that tourists were tempted to pick up; the constant whistling from the staff telling off such thievery is gone, too.)

Stomped on weary legs back down into the town, stopping for more pictures on the way. We don’t have a bath at home, so baths in hotels are luxuries; this one was especially bliss.

In the evening, our guidebook took us to a café favoured by and named after Melina Mercouri. We ate and drank extremely well, looked down on by great portraits of Mel with Dali, with politicians and leading men, such as James Mason. I resisted the primal urge to do impressions.

Easier day Sunday with a trip out to the island of Aegina, where the Dr and I once spent a few cheap nights when a passenger ship’s sinking meant we couldn’t island-hop anywhere else. We were poorer then, and spent our nights on the balcony, eating pistachios and reading aloud Harry Potter. (We started to get what the fuss was about in book 3, when the Dr would get up in the middle of the night to hunt for the book I had hidden…)

Saw the columns and pottered about. I bought two shirts but declined to paddle. Drank a fair bit and just soaked up the sunshine. Ferry home again, and then out to the place round the corner for proper Greek grub – moussaka and souvlaki. Yum.

Monday, we went to the National Archaeological Museum to gaze upon the face of Agamemnon. But despite the promise in the guidebook it was not open, so instead we went to the Benaki museum, which gives a patriotic history of the whole of Athens (and not just the classico-hellenistic bits).

Cooed again at Edward Lear’s drawings, the prep for watercolours that I find less interesting. His drawings include notes and doodles and scribblings out, and so make everything seem more alive and immediate.

Mum liked the various iterations of traditional Greek costume, and the wooden-panelled rooms look cosy and snug, and reminded me of an early date going round Leighton House. One day we will have a house big enough to recreate something similar. Though I will only spoil the Arabian effect by leaving out my sci-fi magazines and hardbacks…

After an expensive coffee on the top floor amid rich Athenian women, we took a stroll through the gardens to the Temple of Olympian Zeus. The last time the Dr was here you could walk right up to the monument, but it’s now strictly roped off.

Lots more good photographs, and I asked if they might ever resurrect the one tumbled-over column. But it’s a Roman temple, so probably doesn’t merit the same attention.

Found a fantastic, traditional little eatery on our way back to the hotel. Ate and ate for less than 10 euros each, then picked up our bags and headed for the plane. Even the airport has a museum of the finds made during development. Dad was particularly taken with how a whole old church got moved.

Arrived tired and grouchy at Heathrow, and had to wait for our cab home to fight through the traffic. Ride home not helped by the M4 being closed, but I got excited when I realised we’d pass the TARDIS at Earl’s Court. No, I’ve not yet seen Saturday’s episode – though am even more keen after Nick Walters’s spoiler-free text…

And so home to much junk mail and waiting works. Going to be a busy couple of months now, with lots of stuff that just needs doing. So blogging nonsense may suffer for a bit. Sure you’ll all be relieved.

I like this, though, which awaited me in the office:

Me want to eat wedding cake!

I know whether the title's from, nyeh.

Er, make that "where" title's from.