Yesterday I enjoyed an excursion – my first full day off in some weeks. M’colleague M had promised some kind of day trip some 11 months, six days ago, and my next birthday fast threatened to lap him. Then he realised that because of a work thing he needed to do some reconnaissance; so helpfully killing both tasks with one stone, I was escorted down to Sussex. 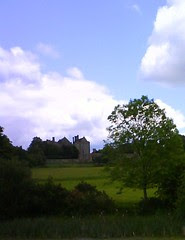 On 14 October 1066 – even longer ago than my birthday – two armies met on a steep bit of hill and fought their way on to the national curriculum. Up top were the Anglo-Saxons, all knackered from a quick-march from the North. They looked down on a right bastard’s army – the descendant of kids’ telly’s King Rollo.

The Battle of Hastings (or, er, the Battle of Battle) was a right bloody affair. Bit shocked to discover that 7,000 people died there – three times the population of a big town from the time.

The English Heritage experience gives lots of gruesome detail, and the longer walk round helps you appreciate the main beats of the fighting. Harold is winning and the Normans run away, and some of Harold’s men chase them back down the hill. And then the Normans turn round and hack apart their pursuers, and William thinks, ‘Ooh, look – that worked.”

(In the pub later I recounted my analogy about the modern equivalent of Harold’s front-line.) 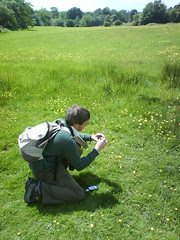 The pretty leisurely route round the field helped give a sense of the scale and practicalities. I remember being made to run up the hill as a kid, to see how the odds weighed against the conqueror. The estate is enclosed in fat greenery too, and you barely hear the busy road beyond the boundary. M’s another country boy living in the big city, and we wallowed in the verdant air. And sometimes the sun would bash through the light cloud and we found ourselves grinning giddily.

The last part of the tour, as you clamber up the gentle-seeming contours, debates the different ways King Harold died. Was he shot in the eye by arrow, or somewhere else in his body? Was he cut down by William’s assassins – who sliced off his head, his innards and a leg? And if there’s all this confusion, how come there’s a stone marking the spot where he fell?

Back at the top, the remains of the abbey and ice-house were teeming with schoolkids from abroad. We couldn’t guess the language in which they rabbited, and left them to climb over the bits of masonry that once held up the ceiling of the crypt. 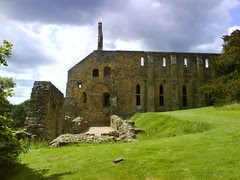 The place stood for just a bit less than 500 years before Henry VIII thought monastic land better shared among his cronies. The only bit still standing was just an adjunct to the abbey – a huge single dormitory, the large rooms underneath boasting glorious vaulted ceilings, the ruins outside showing ambitious plumbing.

We were told how inconvenient the position was to build on – and that the monks originally tried to build somewhere else. But William, now the first of England, was insistent it be built where he’d won his kingdom. He cut people’s hands off for mentioning his illegitimacy, so it’s probably wise the monks did as he bade them.

There weren’t a lot of drawings of what the abbey would have looked like, and I’d assumed something reasonably modest and unassuming. I’ve been spoiled on majestic medieval building by growing up in Winchester – the great cathedral there makes these ruins seem small and paltry. Whereas the battlefield gave a practical sense of the fighting, I struggled to get a sense of the abbey – where it stood, where it pointed, how it big once had been.

Big yes, but how big? And thus how whopping was the conqueror’s sense of guilt?
Posted by 0tralala at 1:40 pm