Have been busy, sorry. But I've done all my reading for the Doctor Who short story competition, and we should have announcments soon. Am now well into Bernice Summerfield - The Inside Story, and have interviewed a great wealth of people in the last few days.

Got masses still to do, and fact-checking and transcribing and putting it all together. But pretty pleased with current progress. It's got to be delivered by the end of June, so I shall remain rather frantic till then. 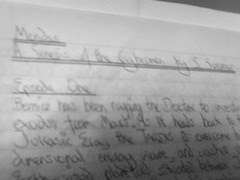 Amid the research, I unearthed my own first ever proposal to Virgin for a Doctor Who novel - sent in September 1994, in my first week at university. It's eye-poppingly appalling, and in typing it up I have tried to keep in all the typos. Yes, the version I sent Virgin was handwritten...

It's in four episodes (I think I was keen it should have the feel of the telly show). Since I've been doing so much judging and lest should be judged myself, we begin serialisation today:

Mondas
A Genesis of the Cybermen by S. Guerrier

Episode One
Bernice has been nagging the Doctor to investigate the Ice Warrior’s exodus from Mars. As it heads back to the end of the Jurrasic Era, the TARDIS is overcome by some extra-dimensional energy wave, and crashes violently on an Earth-sized planetoid situated between Jupiter and Saturn.

Wild and erratic – through his symbiosis with the damaged ship – the Doctor flees the TARDIS. Telling the others to remain, Bernice follows him. She follows him into a strange, alien citadel, where the sparsely seen inhabitants – cloaked and faceless – shirk away from the Time-Lord and his Minder. Soon, masked, armoured police arrive, arresting and dragging off the travellers, and ignoring Bernice’s pleas for the Doctor’s state of health.

Bored with waiting, the other two companions venture out from the ship, into the hands of a small group of rough-looking cloaked figures. They remove their hoods to reveal that they are ALBINOS – as are, apparently, all the inhabitants of Mondas, since the ‘Time of the Burning Skies’. This is a recce group, investigating the TARDIS crash site on behalf of their fellow exiles. They take the two travellers to their leaders encampment.

In a Mondasian cell, Bernice calls for her rights or an explanaition of her crime are ignored by the unmasked, albino guards. A sobered Doctor reveals that Mondas is the home planet of the Cybermen.

The exiles’ leaders welcome the “pinks” (the two companions) and explain how they too were “pinks”, until thirty years ago when they were bleached and made infertile by the “Burning Skies” that have sent their planet moving out to space.

In the cell, the Doctor explains how once, Mondas and Earth were twins, sharing the same orbital path around the sun. Then, for whatever reason, Mondas drifted outwards to become the Solar System’s tenth planet. The atmospheric changes of this shift were too much for the inhabitants, and herbal medecines could not help. Slowly they replaced limbs for metal and plastic… Bernice is concerned, and points out that this period at the end of the Jurassic Era also saw the Martian exodus, the Silurian hibernation and the total extinction of the Venusian civilisation! Such revelations are cut short by the return of the police men, who have orders to take the prisoners to the King!

On the outskirts of the metropolis, the exiles bring the cloaked companions to “convince the people of their aims”.

In the Court room, the Doctor and Bernice are taken to the King and his Prime Minister. The King, seen as strong and proud, is in reality weak and indecisive, following the instructions of the sly, manipulative PM. The newly begun Cybernetics programme is all the Prime Minister’s doing. The Doctor’s natural ability to befreind royalty is rebuked by the PM, who refuses to allow “Pinks” to upset the stable regime.

On the streets, hidden Mondasian police watch the exiles try to rally attention. When the two companions remove their hoods, their is a roar of shock, followed by the appearance of the troops, who mercilessly gun down all those present, including the two companions.

In the court, the Doctor and Prime Minister are arguing. The Prime Minister “cannot allow the travellers (as pinks) to incite further unrest”. He presses a button, and a lumbering “Tenth Planet”-type Cyberman enters. The Doctor’s fear that Mondas should not have Cybermen so soon is interrupted by the PM’s order, “Kill them!”

Pretty good vocabulary ... spelling could be better. Ha! The Doctor and his "Minder"?!

The Mondasians were really going to call Roz "pink"? She would have been so pissed off...

You just don't appreciate my genius.