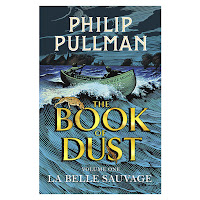 Last week, a long car journey through half-term traffic was made infinitely less taxing by Michael Sheen's reading of the first volume of The Book of Dust.

Set within the same fantastic universe as the His Dark Materials trilogy, the heroine of that story - Lyra - is here a new-born baby. She's being looked after by some nice nuns in a priory, and across the bridge from them is a pub run by the parents of 11 year-old Malcolm Polstead. Mal is a hard-working, concientious nerd, with a love for new words and bits of gadget such as screws that only turn one way. Chatting to pub customers, eavesdropping and watching, he starts to spy a conspiracy building round the baby...

Just as with His Dark Materials, Pullman conjures a vivid, rich world so near and yet so far from our own. Malcolm's borrowed books include A Brief History of Time but he's also accompanied by his shape-changing demon, Asta. The etiquette of demons - that it's rude to touch someone else's demon; that demons can change shape until their human reaches adulthood, when they settle in one form - is all subtely conveyed: a world of strange wonders that yet feels real.

This world is populated with memorable characters, and Pullman is good at making us warm to the nice ones and bristle at the villains. For all the villains are hissable, there are plenty of characters we're not quite sure of, or good people we can't quite trust. Kudos to Michael Sheen for expertly voicing such an enormous cast.

The book is in two parts, and the first is easily the strongest as Malcolm uncovers the plot against the baby and encounters various sinister organisations linked to the Church. I found the chapter where one group addresses his school utterly terrifying, children encouraged to turn on their teachers and parents and friends.


"Malcolm's headmaster Mr Willis was still away on Monday, and on Tuesday Mr Hawkins the deputy head announced that Mr Willis wouldn't be coming back, and that he would be in charge himself from then on. There was an intake of breath from the pupils. They all knew the reason: Mr Willis had defied the League of St Alexander, and now he was being punished. It gave the badge-wearers a giddy sense of power. By themselves they had unseated the authority of a headmaster. No teacher was safe now. Malcolm watched the faces of the staff members as Mr Hawkins made the announcement: Mr Savery put his head in his hands, Miss Davis bit her lip, Mr Croker the woodwork teacher looked angry. Some of the others gave little triumphant smiles; most were expressionless." (p. `147)

If the Church are the baddies, there are plenty of good and kind Christians, such as the nuns in charge of Lyra. Yes, the politics are a little laid on with a trowel - but then that's true of our own world at the moment.

When we stopped for lunch, I asked Lord Chaos how much he understood what was going on in this sequence - and he did, and told me he wouldn't have worn a badge. But it also didn't resonate with him as much as it did with me. But he was on the edge of his seat for the end of part one, and the thrilling things happening in the midst of a huge flood.

Part two is fine and full of strange, arresting events but lacks the thrill of the first half. It details the journey made by Mal's boat - the Belle Sauvage of the title - and stop-offs along the way. After all the conspiracy and intrigue of the first part, I didn't really feel it advanced the plot. There's plenty of excitement, especially in the villainous Bonneville, and the prolonged chase affects the relationship between the protagonists, but I got to the end feeling it hadn't changed much else. That's a shame given the strength of the opening.

The second book, The Secret Commonwealth, is published later this year and set 20 years after the events here - and after those of His Dark Materials. I'm very much looking forward to it, and to the BBC's adaptation of His Dark Materials. You might also like this recent chat between Samira Ahmed and Philip Pullman on how he found his voice.
Posted by 0tralala at 7:50 pm