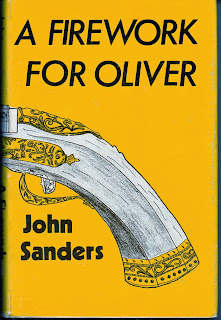 Via a tweet from my chum Farah earlier in the year, I learnt of A Firework for Oliver (1964) by John Sanders. Brother Tom tracked down a copy via the wonder that is Abe Books.

It's a thrilling spy story about a top English secret agent, Nicholas Pym, on the trail of a deadly new superweapon that's being developed by an implacable foe.

The trail leads him into the heart of Europe, and into the arms of a tough but beautiful lady with a tragic past... It's James Bond except for being set in the 1650s, Pym an agent of the Protectorate and the plot aimed at killing his boss, Oliver Cromwell.

From the off, there's an enticing line in dry wit and understatement.


"Pym gave the man in the plain dark suit [his boss, Secretary of State John Thurloe] a cold grin. 'You said something about meeting fire with fire. So be it! Let them find me alone. I am an officer on special service who might know something. They won't kill me at once, without trying to find out what that is. Make it easy for them. Let my face be seen!'

Mr Thurloe leaned back as far as his high-backed chair would allow. A bland expression wiped the anxiety from his face. In an impersonal voice he said: 'Two special envoys from the States-General are arriving in Gravesend in connection with the Anglo-Dutch peace treaty. It will be an occasion for public rejoicing. They dock tomorrow afternoon. You will attend as an additional aide to Lord Clayton, the Protector's brother-in-law, who will be there to greet them.' He picked up one of the pile of dispatches on the oak table and began to read it. Without looking up, he said: 'Don't bother to wear a hat.'"

Like Bond, this is a thoroughly male world and perspective - woman can be clever, resourceful and beautiful, but they're still largely at the mercy of men. At one point, Pym just happens to call on a beautiful lady while she's having a bath - and fighting off a comrade who won't take no for an answer. When Pym steps in and knocks the man unconscious, she is suitably grateful...

Pym, though, is not a womaniser. It's good that he's only interested in one woman in the whole adventure; it's not quite so good when she's the only major female character in the book. There are few minor ones, too.

Like Bond, Pym is an ordinary but competent agent with lashings of common sense, an able guide through the shady political world in which he deals. If there's a lot of exposition - not all of it subtly done - the book is good at establishing the setting and politics. I love that the superweapon involved is - to us hundreds of years after the event - quite a minor advance but promises to offer an army a distinct advantage.

Like the best of Bond, the book is a series of dramatic encounters, many of them visually arresting. There are last-minute escapes and coincidences, not all of them entirely credible. But the book rattles along at a frenetic pace, and we soon learn that anyone who spends any time near Pym is unlikely to see out the day.

Where it's different from Bond, apart from the period setting, is that it's also very funny. By yet more fiendish contrivances, on several occasions Pym has to thump his baffled superiors if he's to thwart the enemy. And, having set up a Pyrrhic victory that's very like Fleming's Bond, there's then an unexpected, happy ending.

A bit clunky and contrived, this is a thrilling, fun adventure - and I'm delighted to learn just the first of a series.
Posted by 0tralala at 3:45 pm