Episode 799: The Day of the Doctor
First broadcast at 7.50 pm, Saturday 23 November 2013
<< back to 2012
And so, at last, I reach the end of this daft project to find one image from each calendar year of Doctor Who and use it an excuse to waffle on in praise of some aspect of the show. It was my attempt to mark the 50th anniversary and for this last installment I want to talk about the 50th anniversary itself.

Andrew Ellard's wise tweetnotes on the episode, which I largely agree with, concluded:


In short: A vastly entertaining barnstormer that put the title character front and centre.

I'd worried that nothing could surpass The Five Doctors (1983), and there'd been rumours and grumblings about what might be happening behind the scenes. And yet, and yet...

I loved The Day of the Doctor, with its fast and funny and redemptive plot. But I especially loved how it encompassed all of Doctor Who - right back to the title sequence, theme music and even the school from the very first episode. Then, after a single shot taking us into the TARDIS (this time in 3D!), we're in Trafalgar Square - where Rose and Mickey had lunch in some of the very first moments of the show when it returned in 2005.

How bold and ridiculous to explain the Doctor's connection to Elizabeth I - first glimpsed in The Shakespeare Code (2007) and The End of Time part one (2009). How magnificent to see UNIT make peace with an alien species rather than blasting them from the Earth. How brilliant to resolve the Time War with a happy ending, yet without revoking any part of the past eight years of the show. 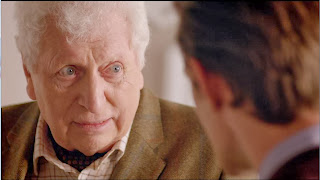 There's nods to all the eras and Doctors - and the suggestion of all sorts of tales we've never even dreamed of, with a brief glimpse of Sara Kingdom stood with Mike Yates. How extraordinary to get Tom Baker into it, how amazing that it remained a surprise, and how perfect was that scene? I found it so moving that it wasn't until my third time of watching that I picked up on the inference that this is a far-future Doctor. Gosh! and sssh! and aaaah!

What really struck me about the episode, though, was the sense of extraordinary joy. And that was matched in the other special programming round the episode - The Night of the Doctor, An Adventure in Space and Time, the Five-ish Doctors, my chum Matthew's documentary, and everything else. All in all, it seemed perfectly to provide something for fans of every era and style of this sprawling, madcap show.

It's not just been on TV. There's been the return of the missing nine episodes - which I assume was carefully stage-managed to happen just ahead of the anniversary. And this year has seen some of the best and boldest spin-off Doctor Who. (At least, I gather it is: I'm hoping for The Light at the End, the 11 Doctors, 11 Stories book and The Vault for Christmas - but that rather depends on whether I've been good.) Plus there's been events all over the country and abroad, and 94 countries got to watch the special episode together.

Perhaps, amid all these treats, some fans may have missed what Doctor Who Adventures did the week of the anniversary. But I think, more than anything else, it might be the one thing to really bring home the scale of Doctor Who's achievement in lasting half a century.

The comic strip of Doctor Who Adventures issue # 333 (6-26 November) broke its own solemn rules and featured a past Doctor. "Time Trick" - written by Craig Donaghy, with art by John Ross and colour by Alan Craddock - didn't just feature any past Doctor, but the original as played by William Hartnell.

Doctor Who Adventures is aimed at 8-12 year-olds - children who've now grown up in an age where the longest gap between new episodes of Doctor Who has been a mere nine months. Hartnell died in 1975 - before the parents of some of those readers had been born. He played the Doctor between 1963 and 1966 - when the grandparents of those readers were children.