We are now in Sydney, and have had a nice time wandering about and looking at things. The Botanical Gardens (the green bit to the left of the bridge and opera house in the pics) is chock full of all kinds of different and exotic trees. And they are chock full of bats!

You'll have to wait till the Dr gets her film developed for pics as they were too far away for my mobile. But cor it was like the trees were ripe with fat, black and burnt fruits. And then they'd yawn and stretch their bin-bag-like wings. And they look all russet and hairy and would probably be nice to cuddle...

Then on to the Domain (the green bit behind the Botanical Gardens) and the Art Gallery of New South Wales. The building itself is a lot like the Art Gallery in Edinburgh, and housed some fun archaeologically-correct stuff by Alma-Tadema and his mates as well as some fun contemporary and aborginal artworks. 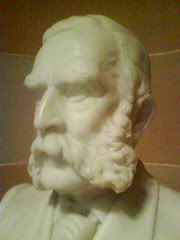 I was especially impressed with this fella in the entrance lobby, and asked special permission of one of the staff to take his picture. As te staff fella said, it was almost as if he'd been sculpted to have his picture taken on a mobile. And them whiskers are sure something to aspire to.

We meandered into Hyde Park, enjoyed the buses and signs to Lewisham, Sydenham, Croydon, Dulwich and Chiswick, and I suggested that a fountain-sculpture of Theseus presenting his meat and two-veg while about to stab the minotaur was all a bit Torchwood, being all blatant sex and monsters. The Dr days there's quite a lot of that in antiquity, and I now have visions of spin-off show Torchwood 2000 BC.

Down Market Street and along George Street, we stopped off to take a pic of the Dr in front of Challis House. Apparently this long-bearded bigwig bequethed lots of cash to local educational somethings. The Dr was rather pleased.

Like Melbourne, there's the same two-tier feel to the place; heavy, blocky Victorian and later building in the shadow of brand spanking new skyscrapers. The Dr kept thinking it looked like Manchester, and the colonies also look like Britain's trading posts in Bristol and Edinburgh and what of London wasn't bombed. You have to remember that it's not that Oz was built in the image of Britain, but that all these colonial towns and cities were influencing each other. Bristol and Edinburgh, London and Manchester are all a brick-and-mortar dialogue with the rest of the world.

Or maybe I have sunstruck myself.

Thence to the Museum of Contemporary Arts, just a stone's throw from our hotel. Lots of aboriginal bark paintings and some depressing documentaries about just how well the native population has been shafted by us Westerners in the last 200 years.

Yesterday we did a wine tour which was entirely splendid; with just me, the Dr, A. and J. being driven round by the helpful Neil, who chatted and advised and bent the whole day around our unhelpfully faffy whims. Started at the Chandon estate and drank fizz. I'd assumed that any French-owned wineries in the Yarra Valley would date from the nineteenth century, with refugees from the phylloxera epidemic that ate up European grapes. Turns out this place only opened in 1985, part of a general expansion into the southern hemisphere (Brazil etc.) and all related to demand.

Drove round a few places and tried all kids of lovely stuff. Many growers have been able to see the affects of climate change on what they're producing; atypical weather in recent years that's unheard of in a century of records. Last year's harvest was badly damaged by completely unexpected hale! It also means that some vineyards are having to rethink what grapes they grow. 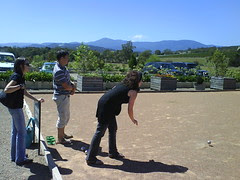 The oldest vineyard in the Yarra Valley is a nineteenth century escapee of ignoble rot. Yaring had lots of nice stuff, but by that point we were rather well oiled and instead tried some Boules outside in the sun. I even managed to win one of the three games I played, no doubt due to the genetic heritage. 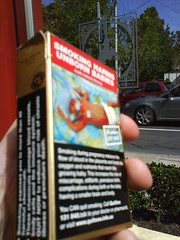 Oh, and one last pic. This is typical of the full-body horrors to be found on the packs of cigarettes over here. None of your big-type Helvetica, just screaming bloody nightmares.

You may need something nice to look at after that. And Brilliant-Looking by Candlelight has an all-squeeing post about The Pirate Loop, with fun pictures and joy and everything. Which is nice.

There's also exciting news from T. and I. back in Blighty. But I do't think we're meant to mention it yet until Everyone Has Been Told. So we have raised a glass of fizz to them but kept our lips firmly sealed...
Posted by 0tralala at 6:01 am

But cor it was like the trees were ripe with fat, black and burnt fruits. And then they'd yawn and stretch their bin-bag-like wings. And they look all russet and hairy and would probably be nice to cuddle...

We had quite a few fly over where I live a couple of weeks ago.

Are you planning a trip to the Blue Mountains while you're down under?

Ello! you should go for a meal in Darling Harbour if you get time - you can get there excitingling by boat from outside the Opera House (goes under the bridge and everything)...

Yay for a) bats; b) fantastic whiskers; c) vineyards; d) Torchwood 2000 BC -LOL. And thanks for the link! I enjoyed drawing the pix.

Simon, glad you're a cool visit. It was great meeting you at Gally. And as I said your s**t rocks!! Hope you'll be back next year and please beg Jason to talk Lisa into coming back :)

Hang on, hang on... Are you telling me you've gone on a fabulous holiday like this... without a camera?

You just made me cry a little! :D