Hello from sunny but breezy LA, where I have a few minutes before my first showbix panel. Yesterday we went to Universal Studios, which was fun but rather heavy on selling Merchandise and Brand. The rides were exciting but mostly quite quick, and I don't think they'd have been worth long queues. Luckily, it was pretty quiet and uncrowded. 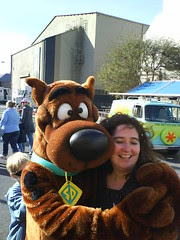 The Dr got chatted up by Donkey out of Shrek and had a cuddle with Scooby-Doo. Will try to load up some images soon. I was made to have my picture taken with SpongeBob, and went on plenty of rides. We couldn't peak down the street from Desperate Housewives becase it was being used, but the other sets and streets on the backlot were fascinating.

Met some old chums and plenty of new splendid people. The Dr's just back from a trip to the Getty Museum, wowed and excited about that. "I actually teared up," she says. "How sad is that?"
Posted by 0tralala at 10:20 pm

The Getty's pretty spectacular. I was there the summer after they reopened it.