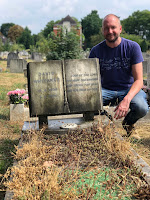 Today, Matthew Sweet and I journeyed out to Chiswick to find the grave of David Whitaker (1928-80), original story editor of Doctor Who and the subject of the book I'm currently writing. It's taken me some time to track down the location of the grave and I wanted to pay my respects.

Having researched David's life for so long, it was oddly emotional to actually find and stand with him. And it was a far grander grave than I'd expected, with an aptly book-shaped headstone. Matthew, who has done this sort of thing before, was ready with a bottle of water and a sponge.

Afterwards, we took the bus up to Hammersmith Bridge, on the way Matthew pointing out the house where Jon Pertwee used to live. We crossed the river -- over the spot where the TARDIS lands in The Dalek Invasion of Earth -- and went for a pint in the pub opposite Riverside Studios, where Doctor Who used to be recorded. There's a blue plaque to Verity Lambert, original producer and David Whitaker's boss. What wonders they created together. We raised a glass to them, just as the storm broke.

Chris Chapman and Toby Hadoke's documentary Looking for David - on which I was researcher - will be included in the forthcoming Doctor Who Season 2 Blu-ray set, announced yesterday. Details of my biography of David Whitaker will be shared in due course, but yesterday Obverse Books announced that my book on The Edge of Destruction, the two-part Doctor Who story from 1964 by Whitaker, will be published in October 2023.
Posted by 0tralala at 6:15 pm