Doctor Who: The Invasion, by Ian Marter 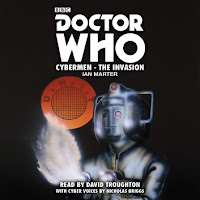 Driving up to Blackpool to collect the wife and children this week, I listened to the audiobook of Doctor Who: The Invasion, a book I loved so much as a kid that I borrowed it several times from Winchester Library. David Troughton is a brilliant choice of narrator, with Nick Briggs providing authentic Cyber voices.

I’ve looked it up, and that book was originally published on 10 October 1985, not quite 17 years after the TV version was broadcast. It was a window on to ancient history – Doctor Who from before even my elder brother and sister had watched it, so old it had been in black and white. Of course, this was also the closest I ever thought I’d come to seeing the episodes themselves. I’d not yet seen any old Doctor Who on video and there’d been just a handful of repeats on TV. But I knew the photo of the Cybermen outside St Paul’ Cathedral from the Doctor Who Monster Book, and remember the vivid thrill of realising this was that story. 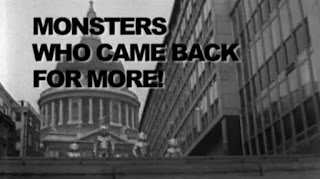 Other bits of the book stuck fast in my memory: the ongoing joke where the Doctor mixes up radio etiquette, or Isobel writing notes on her wall because its harder to lose than a scrap of paper. I’m struck now how much Isobel and Zoe vanish from the first half of the story, their insistence on being involved in the second half feeling a little too late. I also liked Ian Marter’s invention of the Russian rocket base (named after Nicholas Courtney) and the collaboration between US and USSR that’s needed to stop the invasion.

That said, it’s striking how much the novelisation lacks in context of other Doctor Who. How strange to begin with a hanging reference to one of the most extraordinary moments in the series ever, without ever explaining:


“The disintegration of the TARDIS in their previous adventure had been a horrifying experience,” (p. 8.)

The novelisation of that previous adventure, The Mind Robber, was not published until 1987 (I never read it, and watched the TV repeat in 1992 with no idea what was about to happen). We’re not told, either, in what context Jamie and Zoe have both met the Cybermen before – for the latter, The Wheel in Space wasn’t published until 1988 – or that Zoe hasn’t already met Lethbridge Stewart.

There’s something strange, too, about referring to this Doctor as “the dapper Time Lord” (p. 11). Dapper isn’t right for this scruffy vagabond of time, and we didn’t learn that he’s a Time Lord until four stories later. (There’s also something odd about referring to him like that anyway, wrote this human.)

Ian Marter is also profligate with adverbs and often he tells us how dialogue is spoken – tersely or sarcastically, gasped or panted – when the words spoken tell us implicitly. But the main thing is how violent this version is.


“The Cyberman’s laser unit emitted a series of blinding flashes and Packer’s body seemed to alternate from positive to negative in the blistering discharge. His uniform erupted into flames and his exposed skin crinkled and fused like melted toffee papers.” (p. 145)

If nothing else, Jamie wouldn’t be able to rob the dead Packer of his jacket, which he then wears in The War Games.

(Actor Frazer Hines tells me about that in the Jamie and Second Doctor set from the Doctor Who Figurine Collection.)
Posted by 0tralala at 1:23 pm